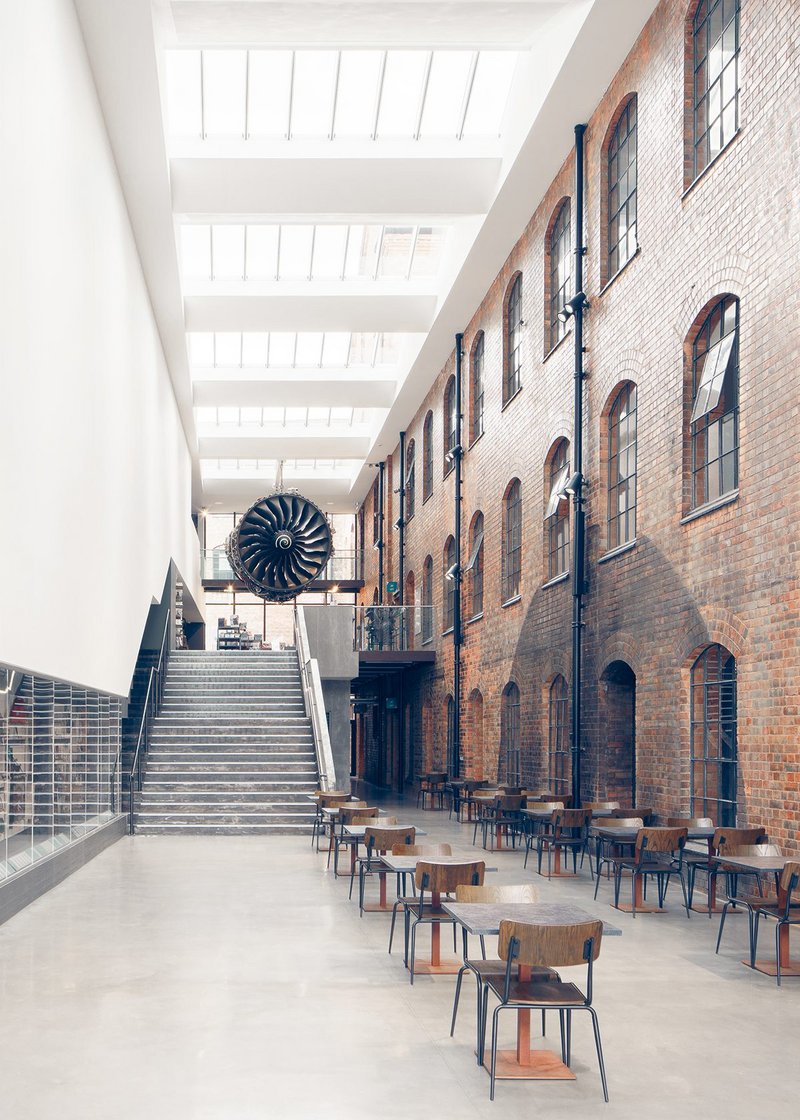 The Civic Hall or entrance atrium to the museum with a café and stairs rising to the museum shop and main exhibition galleries. A Rolls-Royce Trent jet engine dominates the space. Credit: Nick Dearden

The Industrial Revolution is said to have started here, in the early 18th century in what was originally Derby Silk Mill. Supposedly the first British water-powered factory organised on modern lines, it had a sequence of processes from raw material to finished product. The chain of Derwent Valley mills in Derbyshire that runs north from here has Unesco World Heritage status. As the southern gateway to this 15-mile linear site, following an earlier incarnation as an ad-hoc industrial museum and a long period of closure, the mill has been reborn as the expanded Museum of Making. The National Heritage Lottery Fund is the majority funder.

The red brick building you see today is mostly Edwardian and later, though from the riverside path you can still make out the shallow arches of the original silk mill foundations, designed to allow flood water to swill through when the building was on an island in the since-narrowed river. Floods are commonplace so the new museum had to be designed to shrug them off: you’ll never be able to keep the water out in extreme conditions, so the fit-out here makes it relatively straightforward to recover from. The ground floor level is slightly raised, impervious materials are used up to a certain height and sometimes beyond: it helps that the overall aesthetic is industrial anyway. This also explains why the main exhibition sequence of the museum starts on the first floor.

A triple height atrium grafted onto the side of the existing building serves as the ­arrival and circulation point. A grand ­raw-steel staircase (plus lift) takes you to the first floor, where you will also find the museum shop. That, combined with some judicious knocking-through of the spaces in the mill, makes for a reasonably clear route round this L-shaped museum. The entrance hall supplies an introduction to the collection, with objects arranged along the left hand wall as you enter and continuing up the stairs. And of course it also provides space for a decent café/restaurant.

It seems incredible now, but there used to be a coal-fired power station between Derby’s nearby cathedral (as a former parish church much rebuilt by James Gibbs around the time the Silk Mill was built) and the river. It was demolished in 1972 but power stations always leave a legacy and here it is, next door to the Silk Mill: a very large 1960s electricity sub-station surrounded by a tall brick zig-zag perimeter wall. There was enough space to slot the new atrium (‘civic hall’) between the two, but the power company needed room to access the cables running in and out. The casual visitor has no idea that there is a gap for this behind the atrium wall, though a section of blank panels to the left of the entrance facade is the giveaway.

As you enter the building through its glass-and-copper entrance, two big physical objects make it clear that manufacturing in Derby has moved on considerably since its textile days. A part-exploded Toyota car is suspended over the entrance (Toyota’s UK factory is within the city limits) while high up at the far end is a Rolls-Royce Trent fanjet, the kind that powers so many of the world’s airliners. Rolls-Royce is synonymous with Derby, but the city is also a historic train manufacturer and railway centre. So the collection has lots of railway ephemera including a huge model railway set-up in one room that dates back to the Festival of Britain and has been added to ever since. And let’s not forget ceramics, another big local industry.

Bauman Lyons’ director Guy Smith is keen to emphasise the collaborative nature of this project in which the architect and the exhibition designer Creative Core worked together in the same team as the engineers, contractor and client under an integrated project insurance (IPI) contract designed to be non-confrontational. The Museum of Making is only the second project in the country to be delivered in this way, the first having been the newbuild Dudley College of Technology. Smith applauds the model: it wasn’t always easy, he says, but it achieved its aim of everyone working together to overcome the inevitable problems (which here include sorting the electricity substation zone, dealing with asbestos, coping with flooding and the pandemic) and to achieve a common goal. His client Hannah Fox, director of projects and programmes for Derby Museums, is equally positive. She sees the process of ‘co-production’ as extending more widely to the people of the city and region to help define what the museum should be: there was a great deal of hands-on consultation. 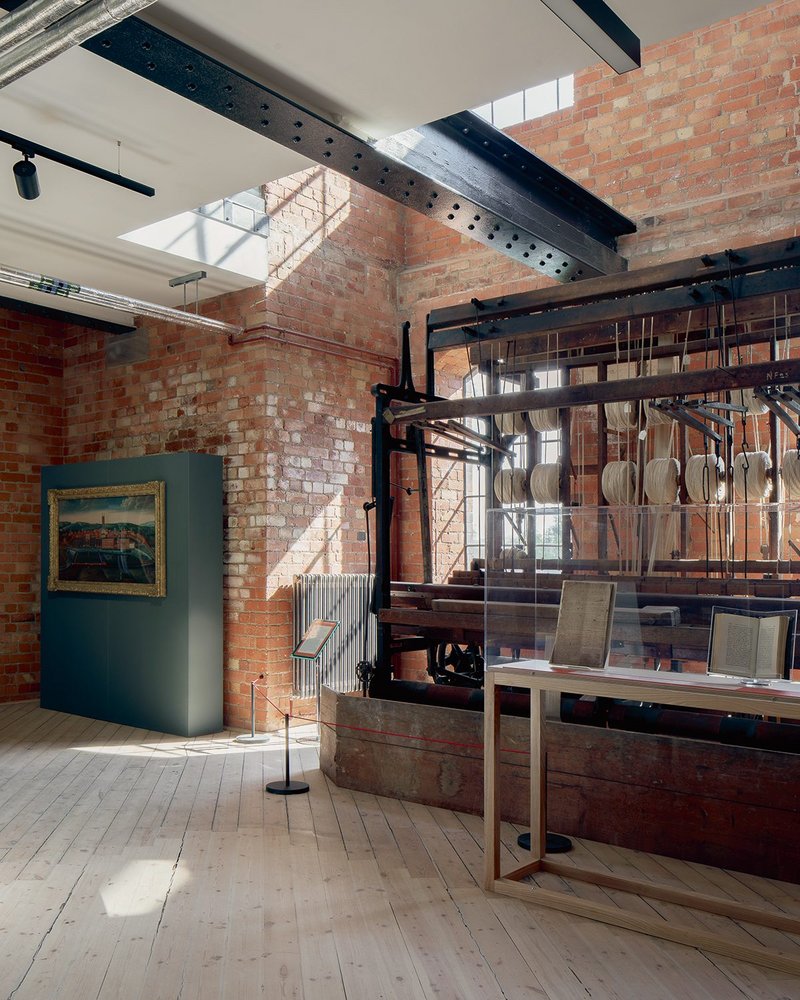 This museum has a lot of rentable space for events – especially the ground-floor ‘Italian Mill’ section, a large catered space which has its own entrance (originally the main entrance). But there is also design workspace up under the roof and, gloriously, some very well-equipped workshops at the back with machinery from ancient to modern, where you can make stuff whether it involves forging metal or using a CNC cutting machine.

Two relatively conventional galleries – one introducing you to the history of the whole World Heritage Site, the other taking you through the themes of manufacture in the area – are trumped by the controlled ­chaos of ‘The Assemblage’, essentially open-access storage of objects organised by material. From touchscreens you can find particular objects or groups of objects, and download or print out a path through the room, opening drawers, sliding racking or just peering at stuff on shelves.

One key decision made by the architect and exhibition designer was to embrace daylight and views out rather than excluding them. There are a lot of windows everywhere: light levels are mostly controlled by filtering film applied to the panes. So you always know where you are relative to the city and the river. There is even a new glazed belvedere at roof level, with comfy chairs, looking south across the square outside.

It’s commendable that everything remains very workmanlike. The new architecture keeps itself functional and discreet, the alterations are appropriate, the exhibition design mostly avoids tricksiness (though not the curse of slow-responding touchscreens). The story told here is a fascinating one for any­one interested in manufacturing and making. What’s so far unknown is whether the move to include workshops and workspace will take off, so reconnecting the history of the area with the present day.

All in all, it’s an audacious move by ­Derby Museums, and one with a genuine civic ­quality to it.