New Ground cohousing development is an inspiring example not only of how we might live as we get older, but of how to live in cities at all 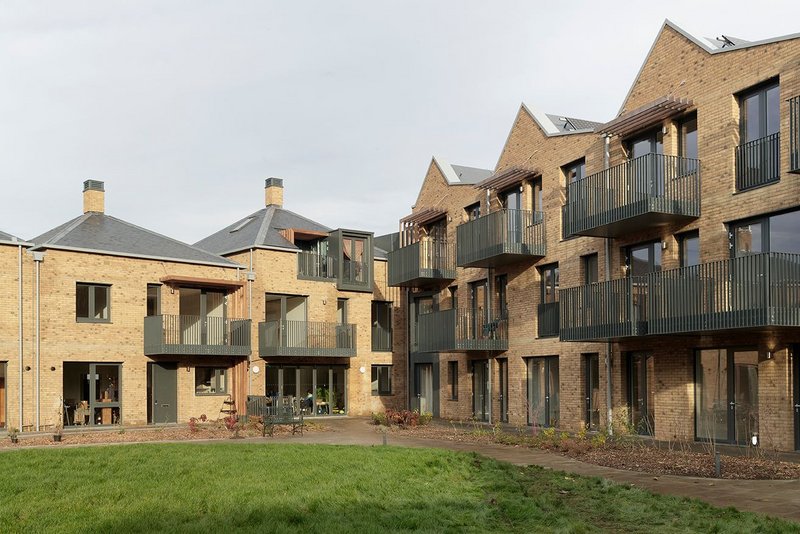 New Ground is conceived of as a mix of two and three storey houses. Balconies indicate the apartments. Credit: Tim Crocker

Some might describe High Barnet as a little down at heel. Its traditional village features – a green, a church and a high street – are mixed with scruffy looking take-away outlets, nail bars and charity shops.  But I love this urban condition, one that typifies much of the London periphery. On the high street, and what’s happening off and behind it, there is space – in the slack between buildings, the utilitarian aspects and soft ambiguities – for a little architectural imagination.

It is no surprise that London’s few realised experiments in ‘the way we live’ are all to be found in this periphery: Y-Cube, RUSS and BedZed to name a few. So it’s to High Barnet that I have come hunting on a blue, blue morning for New Ground, the UK’s first completed senior cohousing project.

New Ground is a cohousing scheme for older women dreamt up by Older Women’s Co-Housing (OWCH), and realised by architect Pollard Thomas Edwards (PTE) and contractor Quinn, with co-partner Housing for Women, developer Hanover Housing Association and funder the Tudor Trust. There are 25 flats at New Ground, eight socially rented and managed by Housing for Women, and 17 owner occupied, with a few shared facilities and a very large shared garden.

Given its radically different programme, the development is surprisingly difficult to spot, its form and materiality blending into the terraced street. There are clues though: the new brickwork (tumbled, mixed stock to try and disguise/ blend/ camouflage itself), the subtly different facade rhythm and the fact that there is only one, shared, front door.

And you enter not through a hall, or a porch, but into a cohouse. What seemed to be six plots from the outside has become one inside, stretching out and terminating in a fully glazed, retractable back wall that opens onto the large shared garden.

It is here that I meet two of the residents, Rachel Douglas and Hilary Vernon Smith, who are to show me round. For me, architecture is always defined as the relationship between people and space, but this is especially true at New Ground – the OWCH women I meet on our tour infuse the building. They have joined OWCH for many reasons. Some have become widowers or divorced, some never married or their children have flown the nest. They are a mixed bunch in age (50-85), wealth and ethnicity, but they are uniformly warm and colourful.

Cohousing is when a group of people comes together to create and manage a community, living in loosely knit proximity often with some element of shared living or facilities. Since the 1960s, it has been a common housing typology in Northern Europe, and has recently begun to gain traction in the UK. Though taking a longer view, Ilena E Strauss points out in an excellent article entitled The Hot New Millennial Trend is a Repeat of the Middle Ages that this is no new thing; it’s how humans have lived for most of our history.

As I am shown around, I am drawn to the way that the ideas behind cohousing are realised in spatial form. Broadly the scheme is organised around the idea of a collection of houses: a mix of two and three storey houses with differently pitched roofs. Internally they are divided into a complex web of apartments. Most have balconies large enough to accommodate a dining table and, facing out into the shared garden, are intrinsically sociable.

A cohouse is central to the masterplan and hosts a weekly meal. Other shared facilities are dispersed through the building – a launderette, large circulation spaces that become almost like rooms as they fill up with furniture, and a luxurious guest bedroom for when people come to stay. This approach generously scatters the moments of sociability. Sometimes these areas have a slight institutional feel – blue carpets, ultra-white walls, matching furniture – but time and hard wear will probably transform them into something more domestic.

One of the great achievements of New Ground is in its relationship to the street. Cohousing academic Lucy Sargisson has written about the tendency of more recent cohousing to be inward looking – middle class enclaves that turn their backs on their communities. These buildings resist this as much as their inhabitants seem too – brick walls come into the building through large streetside windows, and the cohouse kitchen sink is by a large window overlooking the street.

The apartments themselves are generous spaces filled with light, that have already acquired the feel of their occupants. In the careful balance between the individual and the collective, cohousing has typically done a good job of guarding privacy, and New Ground stands in this tradition. The apartments feel very sheltered and personal, and while balconies and other garden-facing spaces connect them to communal areas, retreats are provided by the kitchens, studies and bedrooms.

The architects of New Ground, Tom Reynolds and Patrick Devlin from PTE, who are visiting too, have a visibly good relationship with OWCH. Cohousing briefs are famously challenging because of the multiple clients, but their structured series of workshops were an exercise in collaborative design that enabled decisions to be taken consensually. Importantly for a scheme like this, the architects knew not only what to design, but also where to stop. The invasion of plant pots and other forms of personalisation were greeted by the architects with pleasure – as Devlin pointed out, ‘it’s good to see our design is robust enough to take cat flaps’.

Naturally, this way of living not for everyone. Cohousing rubs hard up against some of the core tenets of the British sensibility: our guarded privacy and our net curtains. But for many urbanites (using the term in the political-sociological sense that has become so pressingly urgent in Western countries of late) this would be a micro-utopia.

Cities, despite their bountiful pleasures, can be lonely places that lack a human scale and rob their inhabitants of control. Cohousing offers some tidy solutions, particularly for older people. As someone who has always ‘cohoused’ knows, daily contact with people you know, shared rituals of gardening or cooking, shared burdens and shared pleasures, is greatly enriching. I probe my hosts for the details of how this all came to pass, hoping that they’ll outline some replicable model that anyone who wants to live in this way might be able to emulate…

Deflatingly, it transpires that New Ground is the product of two remarkable forces that are particular rather than generalisable. The first is the immense energy and commitment of the OWCH women, who have worked for 20 years over tireless weekends and evenings and, for the past six and a half years, with the committed stewardship of PTE. A rigid planning system, a brutal free market for development sites and a conservative legal context makes the challenges for potential cohousers vast and plentiful. Tragically Madeleine Levius, one of the instigators of OWCH, never saw it completed. 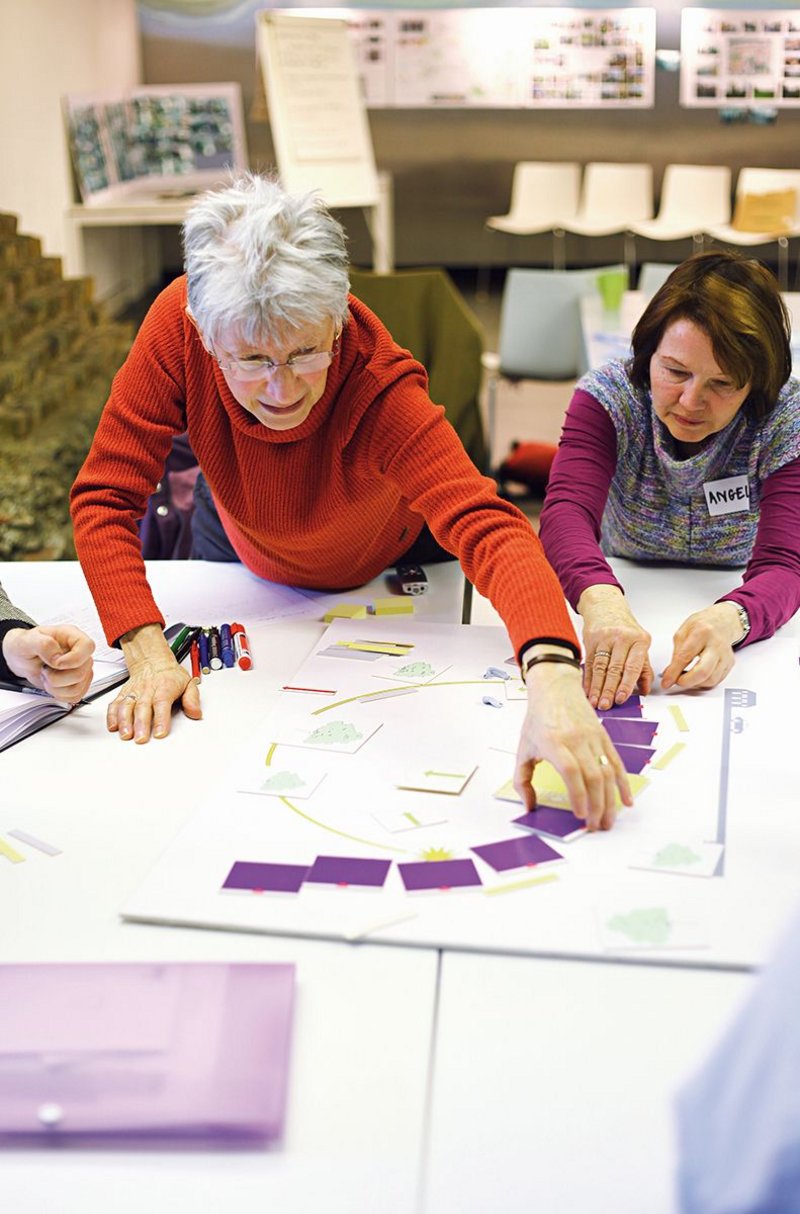 The second exceptional factor is the enabling hand of Hanover Housing Association. Hanover is a leading not for profit organisation providing affordable homes and related services exclusively for older people. It front-funded the entire development at New Ground, from buying the land on the open market through change of use and planning consent to the entirety of the construction contract, valued at about £4.6m. This served as a no-interest loan, which would be impossible to get from any commercial lender, and Hanover was repaid as the housing was sold on pre-agreed terms to OWCH via the individual purchases of the owner occupier apartments and the block purchase by Housing for Women. Not only are there not many NGOs as willing to experiment as Hanover has done, but the sting in the tail is that Hanover has no plans to do this again. In addition, OWCH received a sizeable research grant from the Tudor Trust, adding up to a financial formula that makes New Ground a bit of a one-off.

It’s such great shame that government and local councils aren’t doing more to create space for these kinds of project. What if local councils could take low-interest loans on behalf of cohousers? Or use the self-build and custom-build legislation to safeguard plots for cohousing schemes?

Then – imagine the experimentation! Though it’s impressive what PTE did with the brief, continental examples suggest the architectural playground that a co-housing brief might become in the future. At R-50 in Berlin, continuous balconies become an activated, social and inhabited facade for the whole building. At Sargfabrik in Vienna, avoiding rectilinear lines in plan means boundaries can be delineated more organically and less aggressively. At Silodam in Amsterdam, a playful facade demonstrates practically and metaphorically how individual needs can be harmonised within a collective whole.

I applaud OWCH and PTE for the positive sketch they have provided not only how we might get old(er) but also for how we might live in cities at all – if only more architects could put their pens to this task too.

Georgie Day is co-founder of the architectural practice facTOTUM and the housing cooperative Donkey Work.