UCL’s new student centre from Nicholas Hare Architects buzzes with life and new ways of learning, but outside it got conservative cold feet 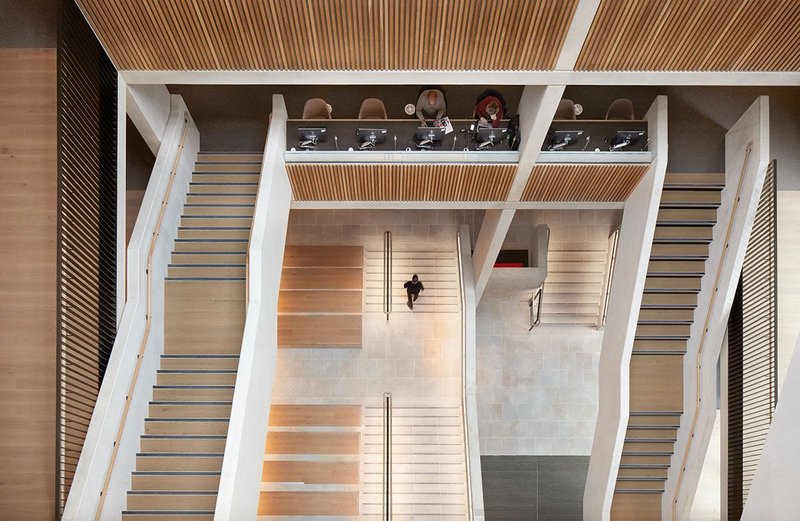 Looking down the atrium. Columns were precast while slabs were made in situ. The flawless connections make them look simple but in reality they were far from it. Credit: Alan Williams

You don’t have to be many years past university to incorrectly assume what is meant by the term ‘student centre’. For most people not involved in higher education or the construction of these buildings it simply sounds like a new name for the student union or, if you are a bit more up-to-date, one of the hubs – like Wilkinson Eyre’s University of Exeter Forum – that was developed in the mid noughties as a congregating place for students where they could fulfil their every administrative need from enrolling and paying fees to finding accommodation.

In fact, the phrase refers to a completely new genre of campus building – one that was quite unimaginable only 20 years ago and is most succinctly described as a hot desking office building for students. Versions of them, including The Diamond by Twelve Architects at the University of Sheffield, are being built across Britain in response to how universities perceive learning to be evolving, particularly as a result of technology. And technology is changing the way university buildings run too.

‘If you go back 15 years students might have had a laptop, they might have had a phone, they certainly didn’t have an iPad,’ he says. ‘There are different modes. Now all students have multiple electronic devices. The way they learn and connect with their faculty is different. Universities have extremely strong wifi systems that allow students to directly connect to the network drive of their department that enables much more flexible working.’

There has also been a shift in learning from solo to group work, which might come as a shock to those who still associate rigorous study with a semi-hermetic, ascetic existence. Whereas previously the rest of UCL’s Bloomsbury campus had a lot of desks dedicated to individual study, this new student centre was commissioned to address how students study now, with 24/7, 365-day a year access and spaces for group activities as well.

It’s clear on the day I visit that the current cohort of students has no trouble comprehending what and who the building is for, throwing out centuries of passed-down understanding of scholarly work as something carried out alone, in quiet and from books. The place is heaving, students are sprawled across every surface, occupying every cranny, and a productive chatter fills the atrium. The lifts are too packed, circulation space too busy, to go anywhere with speed – and the building only opened seven days ago.

Located on Gordon Street along the road that runs behind the university’s iconic Wilkins Quad, the new Student Centre occupies the last significant undeveloped piece of land on UCL’s original city centre campus (there is now UCL Stratford too). Squeezed between James Cubitt & Partners’ 1968 brutalist Bloomsbury Theatre and a terrace of stucco and brick Georgian buildings, the site had been largely vacant since World War II when a church hall there was destroyed. Temporary functions included a fire fighting reservoir for the rest of the war then physics huts, but more recently it was used as a back and service entrance to the interior campus. The unloved gap didn’t make much sense in such a prime location.

Nicholas Hare Architects came to the project five years ago via an open OJEU process. The site already had an approved scheme for a cultural heritage building called the Panopticon, an entirely black granite clad building. That fell through when the main benefactor pulled out because of the financial crisis in 2008, but by 2014 UCL’s objectives had shifted.

As part of its £1.2 billion Transforming UCL Programme, the site became purely for student use. Its brief was simple: fill the hole and create 1,000 learning spaces, as well as a new front door to the campus so that students and the public could walk all the way through to Gower Street on the other side of the Quad easily and unobstructed. It would have to navigate the preceding rabbit warren and three different levels across the 30x30m plot – from the street, 1.5m down to the courtyard to the back left and up 3m to the raised 1980s Japanese Garden to the back right, which was significantly underused. The building should also be designed to last 200 years.

However, it was not just UCL’s priorities that had changed since 2008, but also Camden Council’s. In contrast to the rather radical-sounding and potentially rousing scheme that had previously been granted permission, by 2014 conservatism had taken hold and sympathising with the surrounding heritage had become an obligatory part of the design process. Consultation and approval were required on scale, massing, verified views, materials and every detail.

Hence from the outside, although the building has evidently been carefully considered and well made, its architecture is modest and self-effacing. The three-width bays, proportions and use of brick relate to its Georgian neighbours, and the stepping of its facade, height and massing bridge the street line and scale between those and the theatre.

With the very similar redevelopment of the Bartlett up the road, as well as other schemes in the borough such as Mae and Matthew Lloyd’s infill of the Regent’s Park Estate on the other side of Euston, the building feels like it had an approved approach to designing that demonstrates personnel changes at the council. Added to the tick-box list of ingredients – light Petersen bricks, repetitive facades and anodised aluminium framed glazing and dressings – the method is forming a predictable type across the area, with the par­ticular planner’s buildings easy to spot. Here, the spiky battlements of the receded top floor’s sawtooth roof are the single feature that perhaps distinguishes it from others.

Likewise to the rear, the Student Centre continues the parapet level of the listed Wilkins building and warms the colour of the bricks to yellow to better blend with its neighbours on that side.

It is only when you step inside that you truly see the hand of its architect and the Student Centre starts to scintillate with excitement. The bashful brick drops away and you are faced with a suede-like smooth chalky white concrete and oak interior. The building opens out in front of you – a south-light-filled Escheresque tower of staircases, forest of penetrating columns, flying walkways and mezzanines enveloping up, down and around.

Visitors glide past the reception desk and security barriers to the right, giving the impression of a free-flowing, accessible space. Auditorium seating climbs alongside the principal stair for students to quickly throw down their things alone or in groups. Settees are tucked into the dog-legs of the stairs, as well as underneath. The materials are self-finished and were chosen for their longevity and robustness; solid timbers, very little plaster and paint. Seen from the base of the atrium, the fluidity of the elements and space disguise the essential plainness of the plan – two bars of accommodation either side of the floorplates with the core pushed to the blank wall of the theatre. Spaces that rupture back and forth above give an identity to each level, fitting in 5,750m2 in the process, two below ground, four above and a mezzanine.

The building exceeds its study target, achieving a total of 1,004 spaces to suit any possible need. There are quiet closed off zones of long tables with or without screens, banquettes abutting the stairs, desks and group tables open to the atrium and other sources of noise as well as bookable private rooms and nooks tucked into leftover spaces, plus a roof terrace with power points and café seating. Furniture, also specified by NHA, and acoustics dictate the modes of study and allow for personal preference. The first basement level, for example, is completely windowless and artificially lit, which might stifle some but help the concentration of others. The only functions that interrupt the hot-desk office programme are the contemplation rooms on basement level 2 and the Student Enquiry Office which has been relocated with Wellbeing from the union.

Nicholas Hare has clearly met its brief and created a well-used building that judging by its initial popularity could be justified at twice the size.During my visit only 54 of the 647 spaces were free, as monitored by the clever UCLGo app, which tracks desks like spots in a car park. Young tells me he has logged 400 people in the building at 10pm on a Saturday as well as 150 at 5:50am. Internally, the reason is self-explanatory. Externally, however, it is deftly handled but genteel. The reason seems to lie more with the changed character of the council and university than the architect – ‘What the building looks like is not a priority,’ says Young when questioned, as I think back to the intrigue that full black granite would have created.

This reply is dumbfounding. The university’s location, school of architecture and powerful position should make it a bolder, more ambitious patron of architecture, as it has been in the past with its School of Slavonic and East European Studies and Centre for Nanotechnology, both built in 2005. At this rate, the concrete structure and oak inside might be beautifully weathered in 200 years, but I would be surprised if its facade will still be there.