West Yorkshire Playhouse was built in the 1990s and underwent a transformation just before the upheaval of 2020 hove into view. Its significance for its home city, which has taken ownership of the theatre in its renaming as Leeds Playhouse, finds an echo in its importance to Glasgow-based Page\Park Architects, for which it was the first completed major cultural project beyond Scotland.

The playhouse sits in an odd position, on the fringe of the city centre, severed from the shops and markets by the traffic­scape of parking and A61 ring road and with its face turned away from them. The sloping site meant navigating between entrances and the two auditoria was a complex business.

Its refurbishment came at a particular moment in Leeds history. ACME’s Victoria Gate shopping centre had completed, Channel 4 had pledged to move its HQ to the city, and the college next to the playhouse had finished a £60m campus, setting things up for a cultural quarter. Here was a chance to sort out the theatre.

Page\Park won not only this job, but another for Leeds town hall, so it seemed like a chance to break into the English market and widen its client base. Although the  job was run from Glasgow, a Leeds team member and a Leeds office listed on the website make it look more settled in Yorkshire.

The practice’s approach was to drive a new route through the playhouse, adding a foyer and lift to rationalise the layout and giving access to the mid tiers of the main auditorium for a more inclusive experience. It dug into the foundations to find space for the romantically named Bramall Rock Void, which is given a rough ‘as found’ treatment as a studio for experimental performances.

But the most visible expression of this improved accessibility and reorientation is the new facade in bright terracotta with Playhouse spelt out above. This replaces a rather defensive roofscape of ‘vernacular’ low slung tiled roofs which formerly faced the city. In researching the local area Page/ Park found a strong tradition of faience here and at Burmantofts Pottery nearby. The bright panels enliven this section of the A61 and tell a tale – though you don’t have to know that to enjoy them. Architects Eamon McGarrigle and David Wyllie, who worked on the project, say that the encouragement of their storytelling end user contributed to the concept of the facade as a piece of stage set, with black tiles used to represent the figures of actors and uplighters taking the role of footlights. Set into concrete precast panels they are alternated with glass, giving passing motorists a view into the life of the theatre – or at least the restaurant and café.

And when the lockdown lifts and theatres reopen, this end of town will come into its own, full of character and energy once again.

Take a tour of the playhouse with the architects and Leeds Society of Architects. 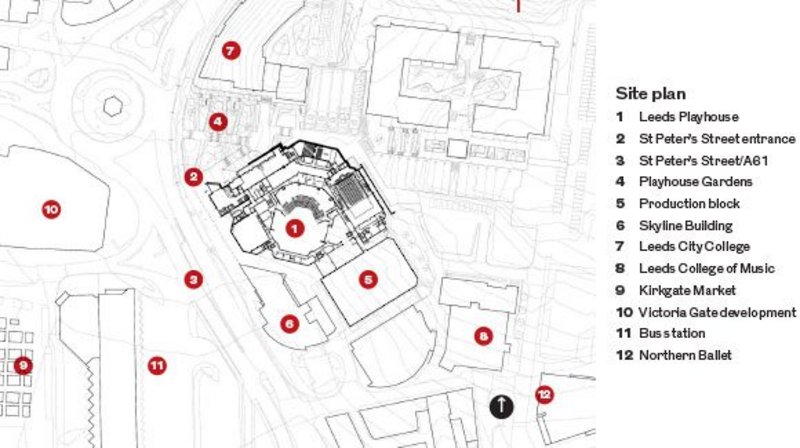