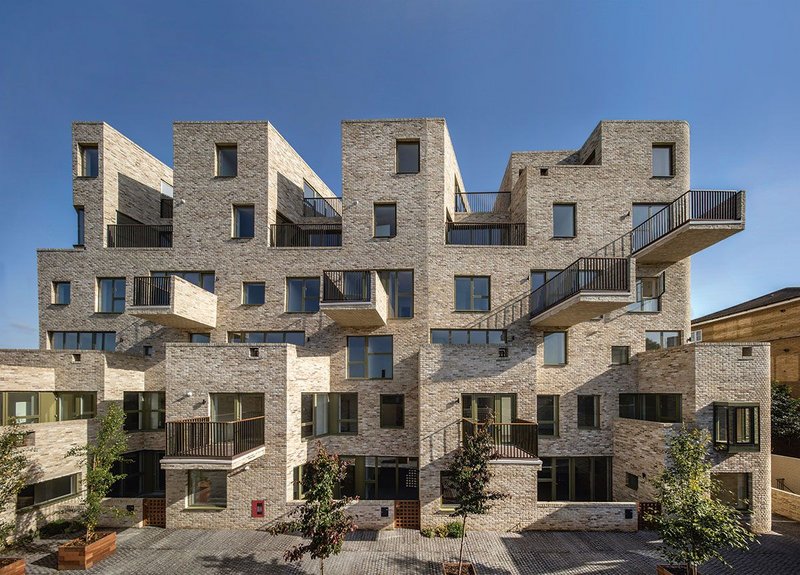 As deeply modelled as could be – terraces, balconies, setbacks and incisions all round. Rear courtyard view. Credit: Morley von Sternberg

It’s remarkable how much space a petrol station takes up with its forecourt and ancillary structures. Enough space, on a busy road in Peckham, to build a block of 33 homes in an interpretation of the mansion block typology – a relatively complex mix of apartment, maisonette and house types and tenures ranging from full market price through shared ownership and affordable-rent to social rented. The moment you see it, you know it’s a Peter Barber project. It’s unmistakable. Few other architects have such a distinctive style.

Barber’s projects, widely admired, may not be loved by everyone – they can sometimes be seen as over-complex or mannered, even whimsical. Having broken through to widespread acceptance he is starting to seem almost prolific, always a dangerous moment when people are inclined to start muttering about a repeated formula. But this is classy stuff, as anyone knows who gets to vet the often depressing standard of apartment-block design in the UK’s cities today.

The steadily-evolving Barber approach has a joie-de-vivre. It embraces everyday life, delights in setting up places for people to encounter each other, values a very old-fashioned tight urban grain, and is totally relaxed about the residents modifying their homes and shared spaces to their own tastes, which the practice sees as a form of enrichment.

Although Barber first became known for social housing and homeless hostels – as his appearances in our MacEwen Award testify – 95 Peckham Road, also known as Peckham Mansions, comes from the private-developer side of the practice’s work. They seem to strike a chord with the small developer-builders, often with awkward sites needing a higher level of design ingenuity than most, such as Moray Mews in Islington. His design approach is, therefore, market-tested.

Barber’s co-director Phil Hamilton shows me round with colleagues from the studio who are meeting the developer – they have another, much bigger redbrick mews project of 97 homes, 50 per cent ‘affordable’, to do up in Barnet, right on the North Circular Road, part of the GLA’s small sites programme. It’s their third project with the firm, Kuropatwa, which acts as contractor as well as developer and sets up a design-and-build arrangement with, er, itself. It seems to work, and the skilled trades it has on its payroll bring down the overall costs to something Hamilton calls ‘the low 2000s per square metre’.

Rather than turn its back on the main road, it addresses it directly with front doors to maisonettes behind little set-back front gardens: the main entrance to the other apartments is to the side. A gate guards the courtyard behind, and is overlooked especially by houses at each end, one freestanding and sunk half a floor to reduce its bulk.

The main block is a pragmatic affair of a four-floor walk-up section plus a six-floor section accessed by a lift and second stair. The various setbacks, cutouts and projecting balconies – some very deep – enliven the facades, making the intended theatrical framework for people’s lives. Inside the set-up is tenure-blind: I could see very little difference between the finishes and fittings while the fact that almost every plan is different anyway, given the many non-orthogonal spaces, helps remove any them-and-us distinctions.

There are familiar Barber touches: gridded timber gates, projecting-box oriel windows, flourishing sedum roofs, cream brick and brick slips, granite setts which run into the entrances. Stairways are tight and industrial-concrete in feel. There’s a little look-out gazebo built into the tall existing back wall of the yard, which is secure and tough enough for children to play in.

Residents are moving in steadily. Balconies and terraces are just starting to be ­personalised. There will be clutter and chatter and chance meetings. Another Barber building is coming to life.