The much-crossed River Hull gets its 12th opening bridge, and you can use it as it moves 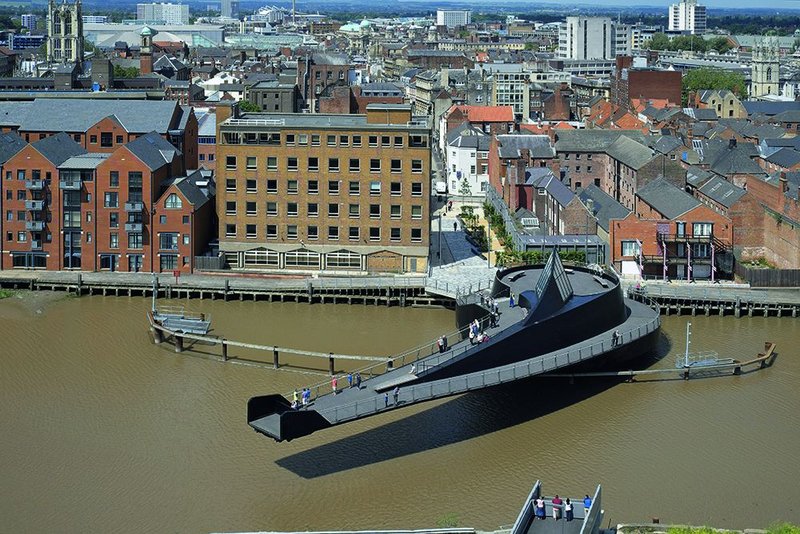 It’s been ten years in the making, but the City of Kingston upon Hull has at last got its 12th moving bridge over the River Hull, while the world has got the first one that can be occupied as it moves. The £7 million Scale Lane Bridge, designed by architect McDowell+Benedetti with Alan Baxter Associates as engineer and M&E engineer Qualter Hall, forms a key part of the regeneration of the city’s urban core. It links Hull’s Old Town Conservation Area with the former industrial and now brownfield eastern urban centre, where Terry Farrell’s decade-old aquarium ‘The Deep’, began the renewal of the River Hull’s eastern bank. The bridge cantilevers 35m over the river, pivoting on the west bank, to allow river traffic through. The drum it revolves around is earmarked as a restaurant unit, intended to draw over punters from the city’s museums quarter. However, the ambitious and technically complex design, was conceived in brighter economic times, before many of the city’s eastern area development projects were shelved due to the recession. The restaurant unit currently stands empty. But finally opened, illuminated nightly and with a sonic installation by artist Nayan Kulkarni, the new bridge is arousing the curiosity of Hull’s residents. Already taking on the moniker of the ‘pinball flipper’ by locals, it also seems to be earning their affection; bringing a playful sense of ‘tilt’ to a maritime city more accustomed to the tiller.