Marwan Lockman was a rank outsider to design a concert venue in Bahrain’s virgin desert, but the sunken result fits in as naturally as the mountains that back it

Not many building projects start with an Eric Clapton concert, but the new Al Dana Amphitheatre in Bahrain did. Eight years ago, an outdoor concert for 2000 people there sold out within minutes and sparked the idea among the authorities that there was a potential market for a more permanent concert venue that would attract a local and international crowd.

A site was found where the second straight of the Bahrain International Circuit (home of the Grand Prix) turns into the corner of the third, and a semi-informal invited competition was launched to find an architect by the Office of the First Deputy Prime Minister.

Marwan Lockman, born and raised on the archipelago, was working at the time as an architect for his father’s firm, mainly on luxury villas. He was 38 and had never worked on a public project of scale, but he was itching to take on something new, and was a huge musical enthusiast. He asked to submit a proposal – and to his amazement, the organisers humoured him. 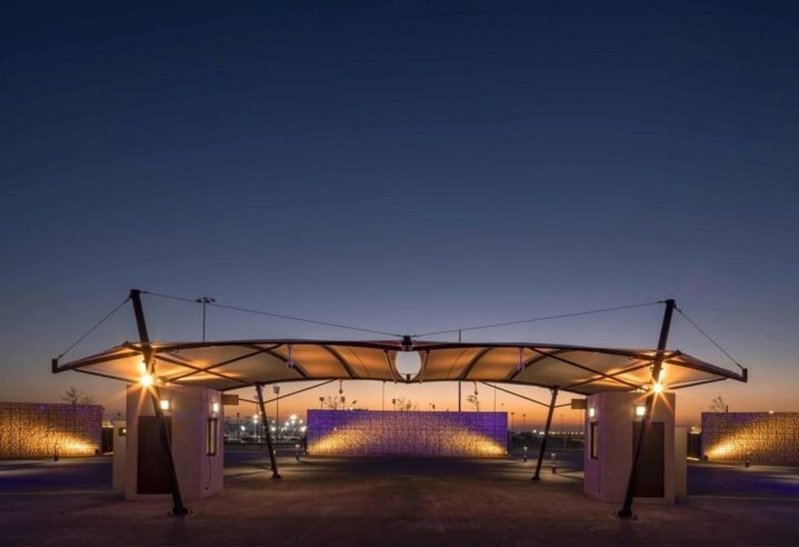 One of the three entrance canopies with turnstiles on wheels. Credit: Al Dana Amphitheatre

The brief was to design an outdoor concert venue for 5000-10,000 visitors that would also serve as an attraction on the racetrack, as the casino does for Montreal’s or the lagoon at Abu Dhabi’s. Built on virgin desert land, it would be part of a wider development push around the track that would include a new sports stadium and exhibition centre.

Lockman knows the area well and had been going to the F1 track for 10 years. ‘I had one of those thunderclap moments,’ he explains ‘where you hear about a project, close your eyes and the design is clear almost immediately. I sketched it out before going to bed and it hasn’t changed much since.’

While the other entries built upwards, Lockman’s idea was to build down to create a huge open-air desert rock venue in the spirit of the greats: Red Rocks in Colorado, The Gorge in Washington and, of course, the amphitheatres of ancient Greece and Rome. He wanted it low in the existing topography to accentuate the desert atmosphere. The prevailing winds positioned the stage to the west, so everything fell into place with it positioned against the setting sun and Jabal al Dukhan (Mountain of Smoke), Bahrain’s highest point at 134m above sea level, behind.

The concept was favourable, but funding issues saw the project go quiet for a year. When Lockman got the call that it would go ahead he quit his father’s practice and started his own, launching S/L Architects. The project opened less than four weeks ago on 5 November 2021, having being kept secret during Covid. For Lockman it has been a once in a lifetime opportunity to carry a logic through from concept to tiny detail, and design a building truly of its site where artists would enjoy the thrill of performing in the middle of a spectacular desert in the open air. Lockman believes it will draw out performers’ best shows; even the backstage showers, for example, have views onto the landscape and mountain range.

The key to his confidence is materials. The amphitheatre itself is sunk into the natural limestone foundation and the other materials fit naturally on the site too – stone reused from the excavation process, rammed earth walls and rusted steel. These are hardwearing materials that weather well in this tough climate of frequent sandstorms and high humidity.

The ambition was also to make the building fully accessible to wheelchair users and to give it unparalleled sound quality. Lockman studied the plans and a report of the precedents from technical writers. At Al Dana, the plan is directed by the amphitheatre’s 90m length, which is almost identical to Red Rocks and is optimised into a fan shape that accommodates 9,841 outdoor spectators on bench seating without requiring repeater speakers. The stage is 15m tall with an up-lit limestone backdrop and a roof topography that was designed in Grasshopper to mimic the profile of the mountain range behind. Limestone and stone-filled gabion retaining walls all around help with the scattering of sound, reducing echo. The whole venue has been designed to the US disabled standard with wheelchair access almost everywhere, including to all balconies and corporate boxes. A late addition to the project, these are converted shipping containers placed on top of retaining walls that flank the auditorium. Discreet, low-level 3000 kelvin warm lighting has been used across the amphitheatre to focus concentration on the stage and help the building melt into the surrounding landscape, allowing visitors to forget they are in something man-made.

Spatially, visitors enter conventionally from behind the amphitheatre and pass through turnstiles on wheels that can be moved for exit. The design manages to reduce entry times for 10,000 people to 3 minutes 40 seconds, and exit to as little as 1 minute 50 seconds – something Lockman is particularly pleased with. From here three leaf-shaped seating structures gently guide circulation across an open-air plaza towards the entry points to the auditorium. Concessions and retail are tucked underneath the auditorium’s raked seating, with a rooftop terrace that corresponds to the top of the auditorium. Everything has been designed to create the most seamless visitor experience possible, including 248 WCs also located beneath the raked seating. To the right of the plaza is the administration building. This is cloaked in champagne-coloured powder-coated aluminium screening with a matching canopy covering an outdoor restaurant, which links the racetrack with the amphitheatre and offers views over both.

Running between the office building and the stage are the back of house area and an indoor 1700m2 bar/lounge that can hold 800 people for small performances. As a result, the venue can function all year round, even when the outdoor theatre is closed over the summer during the hottest months. Above is a playful desert garden with a bonfire pit where VIPs can continue partying the night away, or which can be let out as a revenue generating space. A 1970s Bluebird bus has been converted into four WCs as part of the landscaping for the garden. The VIP dressing rooms each have their own terrace and garden looking over the desert.

‘We worked with Garreth Thomas on the interior design,’ says Lockman. ‘We wanted to bring the external experience inside. The bar is topped with a vinyl material and clad with cloth from Fender. In the bar, there are velvet curtains, an epoxy resin floor and aged leather sofas for a “rocked forever” look… WCs have a raw concrete finish, more epoxy resin floors, the sinks are made from chunks of rock and the taps are simple exposed copper piping.’ In the offices ceilings are exposed, recycled pallets act as wall dividers and flooring is made from recycled car tyres. 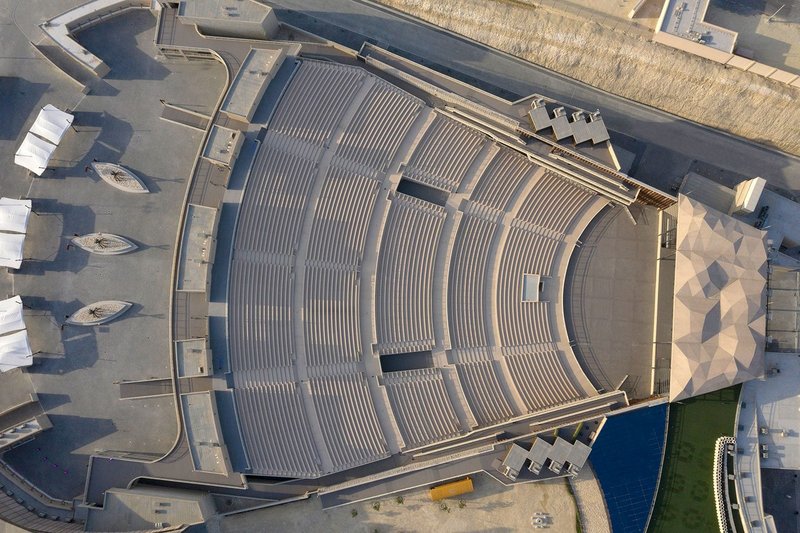 Indeed, this is the crucial aspect of the project: Lockman was involved in every detail of the design right down to the fittings, and also in the graphical scheme, typeface and wayfinding signage (designed in raw steel with backlighting). The materials palette has given the project has a lower energy footprint than usual for a project in the Middle East. While the structure has much precast concrete in it (which he says is basically a local material here), other materials come from the site, are local or are recycled as much as possible. Another big concern was rain and storm water so there are two buried tanks to withstand a once-in-300-years rainfall, from which some water is reused elsewhere. The aluminium screens aid natural solar shading, which gives the project an unexpected character for its location. The earthiness of the building contrasts with its edgy, lived-in interior design in ways that will be blood tingling as the sound of a live performance blasts out from all around.