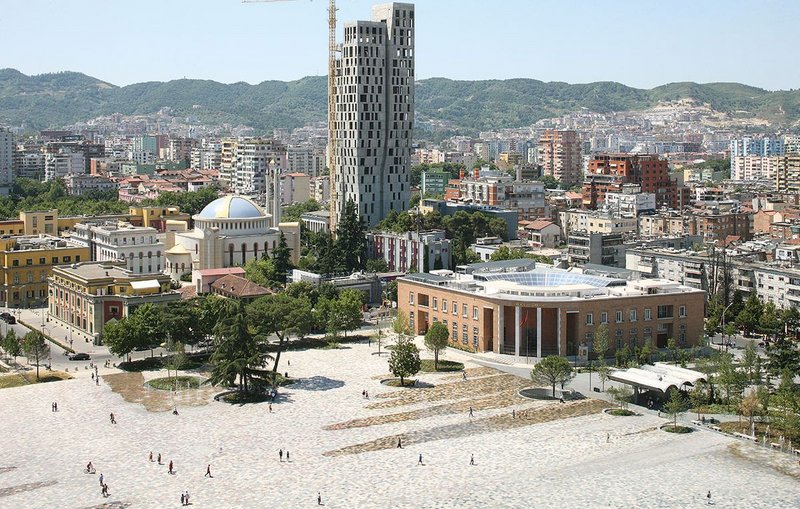 Skanderbeg Square looking south east. Unifying various ministries and public buildings around it, the reinvented square is more monumental yet more humane than in its former iteration. Credit: 51N4E/Filip Dujardin

There is a reason why Belgian architect 51N4E’s Skanderbeg Square landscape project in the Albanian capital of Tirana was one of the five projects on the 2019 shortlist for the Mies van der Rohe Prize for the best building in Europe. In the call for submissions to redevelop its main public space in 2008, then socialist city mayor Edi Rama’s scoping letter of invitation was so visionary and erudite, connecting his spatial intentions for the city centre square to the wider cultural aspirations of the nation, that nothing less than a design whose scope embodied his ambition was ever going to be worthy of winning. Though the project was cancelled a year into construction in 2011 by a more conservative administration, that bold thinking saw it relaunched in 2015, when the deposed Rama returned as prime minister. During the hiatus 51N4E developed its ideas to produce a nuanced civic scheme of exceptional aesthetic and symbolic finesse, rightfully earning a place on the shortlist.

Formed as a country only a few years before WW1, Albania has lived under six regimes; three of which helped form modern Tirana. The Austro-Hungarians created Skanderbeg Square in 1917 but it was the Italian invasion under Mussolini in 1939 that generated the massive-scaled boulevards and neo-Renaissance facades. Post-war, the USSR made Skanderbeg its parade ground – accentuating the square’s curious monumentality in this small city.

The 2008 competition aimed to arrest what the square had become in the post-Soviet years. Surrendering, in its new-found democracy, to the hegemony of the car, Skanderbeg had become a glorified round-about at the heart of the city – albeit surrounded by key civic buildings from the intervening period, including the central mosque, National Library, state museum and opera house, and City Hall. Just before the competition a French masterplan had been partly carried out with a new outer ring road linking the radiating routes from the square. This released the traffic’s stranglehold on the main public area but the bigger plan had been to build into the square itself in order to densify it.

51N4E’s winning proposal ran counter to all this, mindful of the unregulated density of development exhibited everywhere else in the city, and making the political decision not to play down the historical imprint of past regimes. ‘We decided instead to celebrate the largeness of the square as well as acknowledge the different eras that are represented here,’ says 51N4E project director Sotiria Kornaropoulou. ‘We saw Skanderbeg Square as the focus of a pantheon of buildings showing what Albania had been and we thought it better to express that truth than to mask it.’ Their re-imagining of the 168m by 146m square, constructed using indigenous stone, is screened by a curated landscape of existing and new trees and shrubs; 12 gardens simultaneously framing and connecting all the civic buildings that form the square’s perimeter. With this ‘fuzzy edge’ of verdure adding 50,000m2 to the square’s 40,000m2, in total the project has created the single largest public space in the Balkans.

As Kornaropoulou explains, the proposal rested on three main ideas. As well as recognising the ‘palimpsest condition’ of historic and Soviet structures around, the soft landscaping was not merely to be infill between the old road and new outer ring road, but to have meaning and value in its own right; and lastly, stakeholder engagement in both square and garden spaces would give the civic institutions and citizens themselves a sense of ownership of the space.

The poetry of that democratic appropriation plays out in the design in many and subtle ways. 51N4E wanted this politically charged space to suggest ‘soft power’ and its design moves were nuanced. For a start, the square is not flat, but a low pyramid that inclines to the centre at 3%. Kornaropoulou says this serves a dual purpose. Not only does it break down the visual scale of the square in one simple move, ‘hiding’ one half from view, but as citizens move towards the apex, the spatial power of the plinths on which the former Soviet edifices sit is negated. ‘We saw it as a means of countering, de-monumentalising and discharging its totalitarian nature, allowing citizens to stand eye to eye with the public buildings around – to symbolically reclaim it as theirs,’ she says. And the pragmatics of rationalising decades of ad-hoc utility runs under the square aside, the firm justified the expense of shifting thousands of tonnes of earth by squeezing in another level to the underground car park.

The low angle did more than facilitate the drainage strategy of the square – a narrow slot drain running around the perimeter. Across it 100 trickle fountains slowly pump water over its surface. ‘This too is a means of breaking up its monolithic surface through revealing the colour of the various stones as well as creating a cooling micro-climate for those traversing it,’ explains Kornaropoulou. More than 30 stone types, sourced from small and redundant quarries all over the country were cut into 450 by 400 by 90mm tiles (a module of the square itself) in white, red, grey and green hues. As well as referencing the regional geology of Albania, it immediately positions people in the space, says the architect, with a colour shift in the stone palette apparent if you go from one corner to another. It is more noticeable when wet, what the firm calls ‘an intimate moment with the stones’

With the urban wilderness of the Paris Fondation Cartier as a guiding principle, 51N4E developed the perimeter landscaping to connect the existing civic functions and disparate paved areas with a belt of green of varying density; a ‘spatial crescendo’ of nature gradually experienced on approaching before the reveal of the vastness of the square beyond it. A ‘buffer’ and liminal point between the square and the city, the planting both renders the traffic invisible and absorbs  its sound.

Kornaropoulou explains that the illusion of depth was almost baroque. ‘We wanted to create the sense of an urban forest and the trick to that was structuring the planting in multiple layers, with low and high perennial shrubs followed by trees.’ The strategy, developed with Flemish ecological consultancy Plant en Houtgoed, was more akin to installing an ecosystem then mere planting. Biodiversity was addressed by treating each of the 12 gardens in front of the various institutions in a different way, according to their ‘planting matrix’, which varied the percentages of shrubs according to their specific position. The aim has been to create a garden that is low-maintenance, irrigated with a ‘wadi’ system and would naturally evolve over time. ‘There was the intention that some species would deteriorate or even disappear while others will thrive and take over,’ the architect adds. ‘Much effort went into creating dynamic planting biodiversity that would be noticed as such as you moved around the perimeter.’ Existing mature trees were left untouched within a circumference of stone planters ranging from 8-20m in diameter, some with bench seating installed within them, allowing them to be sat in as the angle surface of the square sails past them.

Each garden addresses a different civic building, adjusting to their specific needs, and required much stakeholder involvement. So the Tirana International Hotel created a terrace it could extend into for weddings and events, the National Library pushed for more seating areas for open-air readings and outside the National Museum jet fountains cater for families. Small pavilions, also designed by the architect, provide points for citizens to linger and engage. And connecting them all is a formal network of pedestrian and cycle routes.

Nightfall reveals other strategies. Mostly low level lighting illuminates shrubs and trees in the green belt, with indirect dappled light only on the winding paths. Main routes approaching it are lit more intentionally, drawing pedestrians into the greenery: ‘There are high flow sections and quieter areas and the lighting reflects this’. But the square itself is unlit. This is a deliberate act of ‘not doing’, and required the authorities to allay their fears and buy into the architect’s vision of a caesura at the heart of the city. ‘We tried to impress this idea on the city from the very outset; that the square should be seen almost as a lake in the centre of a park. That you could stand at its edge and look out in the dark to a kind of open horizon,’ says Kornaropoulou. ‘It is an area of rest at the scheme’s centre, the surface water reflecting the illuminated buildings on the other side. It’s quite beautiful actually.’

And by day, people drag the 250 cheap, green metal mesh chairs that the firm designed from sun to shade and back. In a final gesture of anti-monumentality, 51N4E argued against fixed seating and allow users to sit where they want. Locally fabricated, the sophistication is in their dimensions: ‘At 80cm wide, they are large enough for two people to sit together if you are familiar with them but too small for a stranger.’ Appropriated by the city dwellers, they float daily like flotsam between the edges of the square and the shade of the trees; loose furniture in this poetic new living room for the city.