Stonehenge finally has a visitor centre that gives the monument the isolation it deserves. Its new architecture is another story

There’s a particular type of very superior French motorway service station, quite unlike the workaday British equivalent. With good architecture and landscaping, these travellers’ oases are conceived as portals to their region, encouraging motorists to leave the motorway and explore. In them you generally find a mini-museum of the Département in question, plus a shop stocked with regional gastronomic specialities and – of course – a good café/restaurant. The new visitor centre for Stonehenge on Salisbury Plain, by Denton Corker Marshall, is exactly like one of these. That is no disgrace.

Set in a hollow 2.5km west of the Stones and hidden from them by a wooded ridge, the new centre at Airman’s Corner (memorial to a pre-First World War plane crash) is, like those French examples, designed to slow people right down from trunk-road speed so that they pause and start to appreciate and learn about their surroundings rather more intensely. The centre consists of two square boxes – one glass, one timber – beneath an oversailing roof. The timber box contains the museum and toilets, the glass one has café, shop and education space. Between them the space houses the ticketing booth and acts as a gateway through to the visitor shuttles (five sets of little carriages pulled by Land Rover) that take you over the ridge to the Stones – unless you’d rather walk. The slightly kinked roof, supported on a forest of slender steel columns, shelters these facilities and acts as a generous shelter around them. Its form echoes the copses of trees you find on the plain, but given its location might also be seen as referring to the wing and struts of an early biplane. Its delicacy, culminating in very thin, perforated edges, contrasts with the more lumpen nature of the two blocks beneath it, which are set slightly off-grid relative to each other in an act of defiance against the purely symmetrical. The columns are a veil to these.

If it was just a matter of another visitor centre – surely a key typology of the postindustrial era – there would not be much more to say. These buildings have a particular task to perform, we know what functions to expect, and duly find them here, present, correct and acceptably packaged. But this one is for the greatest Neolithic monument of them all, coming right at the end of the Stone Age: the monument that shows the conscious beginnings of architecture and engineering in its partly dressed stone, carefully radiused lintels and interlocking construction. That’s before you get to its astronomical exactitude and symbolic importance. Small wonder that Inigo Jones (see p76) could not resist ascribing it to the Romans.

The problem of how to handle visitors to Stonehenge has rumbled on for at least 30 years, since the newly-formed English Heritage took it over from the former Department of Environment. The closure of one of the two roads that rush past it was first proposed in 1927. Its previous cramped visitor gateway building, next to a large coach and car park very close to the Stones, linked to them by a pedestrian underpass beneath the A344, opened in 1968 and by 1992 was described as a ‘national disgrace’ by the Public Accounts Committee. These days Stonehenge is a designated World Heritage Site, which made it even more disgraceful.

There have been successive competitions to resolve the problem. The first, won by Ted Cullinan in 1992, envisaged an earth-sheltered building on military land at Larkhill to the north. The army was unhappy about this. Cullinan later produced a masterplan for EH for the whole World Heritage Site and identified other locations. A second competition in 1999 for a PFI project to be operated with the Tussauds Group was abandoned by EH at shortlist stage. A third competition in 2001 was won by Denton Corker Marshall but funding depended on sinking the A303 main road – busier than the A344 but a little further away to the south – in a cut-and-cover tunnel. Although approved, the tunnel was abandoned on cost grounds and the design went down with it. Finally the Airman’s Corner site was selected, a new design by DCM won planning in 2010, and it is this that has finally been completed.

It’s fair to say that the general solution offered by Cullinan in 1992 – drop-off and bilaterally-split visitor centre at some distance from the Stones, with shuttle transport from there – is what has finally been built more than 20 years later, albeit on a different site and with a very different architectural expression. The A303 remains stubbornly on the surface of the Plain on grounds of cost – EH head Simon Thurley has vowed to continue the battle to put it underground – but at least the A344, which ran so close it virtually grazed the Heel Stone, has at last been closed at this point and returned to chalk downland. This also reconnects the processional routeway known as the Avenue from the River Avon to the Stones, aligned with the midsummer sun. The effect of this is enormous, even in the not-quite-finished state in which I saw it shortly before Christmas. The Stones have heel room at last. Having got so used to the subway under the road by the Stones, temporarily going through a subway under a field instead felt odd indeed. The subway will go but a minimal ticketing presence will remain on the old site.

There is more: since much of the land round here is owned by the National Trust, the plantation on the ridge between DCM’s new centre and Stonehenge is itself being turned into an interpretative viewpoint for the many earthworks in the vicinity. So the overall presentation and setting of the World Heritage site has taken a great leap forward, with English Heritage, the Heritage Lottery Fund and the National Trust working together on what is in total a £27m project.

Of this, the visitor and exhibition centre accounts for some £6.9m, an ancillary building for back-of house activities £1.1m (expressed as a single-storey timber-clad beam, this sits behind a row of trees near the centre and allows the architect to keep the bulk of the main building down) and road alterations £1.2m. The visitor centre, while plainly a very conscious piece of architecture, steers clear of ‘icon’ status – very wisely, in view of the real icon nearby. Equally wisely, it avoids any referential massive-stone or circular trickery, except inside. It sits lightly, with minimal foundations, on this archaeologically-rich ground. The forest of 211 slender square-section columns, distributing the weight of the roof, lean at various angles and look a little strange at the corners where they support almost nothing: there is no overhang. Some columns rise full height but above the two pods they are mostly in two parts to reduce penetrations, stub columns above the pods continuing the line of the columns inside.

The glass box benefits from costly low-iron glass which pays dividends: you get no green hue when looking out at an angle. The museum box is clad in pre-weathered sweet chestnut, untreated except for a clear fire coating where it is used internally. The planking is not sawn neatly round the various openings, but left ragged, a conceit that is irritating rather than satisfying.

Around the building, paving is of local limestone while inside, floors are of polished concrete. Acoustic ceilings look rather cheap, with square holes crudely punched through for the columns. The layout of shop and café is unexceptional: the interiors get rather more interesting in the timber museum box. There, you enter through a circular changing diorama of the stones through history and through the seasons (the solstices being rather important here). Then you are into the permanent exhibition which gives a potted history of the monument and how it was built. A secure conservation-grade gallery in one corner houses temporary exhibitions, entered through a huge radiused, centre-pintle revolving door. The opening show is ‘How our ancestors saw Stonehenge’: a history of histories, if you like, including that of Inigo Jones.

Outside, things will get a bit more theme-park. A replica bluestone on a sled will be joined by replica Neolithic huts, since we now know that there was a lot of habitation here. Archaeologically as accurate as possible I’m sure, but this does once again recall those French service stations with their hints of Asterix. As I left, I bought a couple of bottles of Stonehenge ‘Heel Stone’ beer from the shop. English Heritage may prize authenticity but it has no problem with souvenirs.

The big planning moves here look promising – we’ll have to see if those five shuttles can handle the high-season crowds. The new building is – let’s be honest – a bit of a let-down. You can’t help thinking, 30 years’ wait for this relatively low-key, perfectly adequate if not wholly successful piece of architecture? But I guess, in the context of the life of Stonehenge, this is just another temporary blip on the symbolic landscape. It doesn’t show off too much and it does the job. 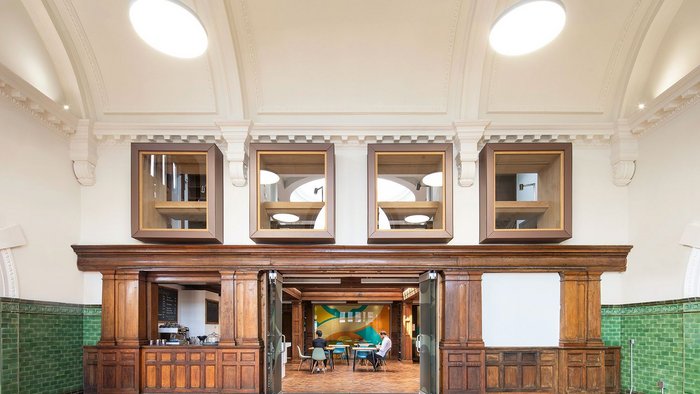 Waterproofing and profile products are backbone of Kent washroom refit

Nothing beats a wraparound glazed facade for modern building projects