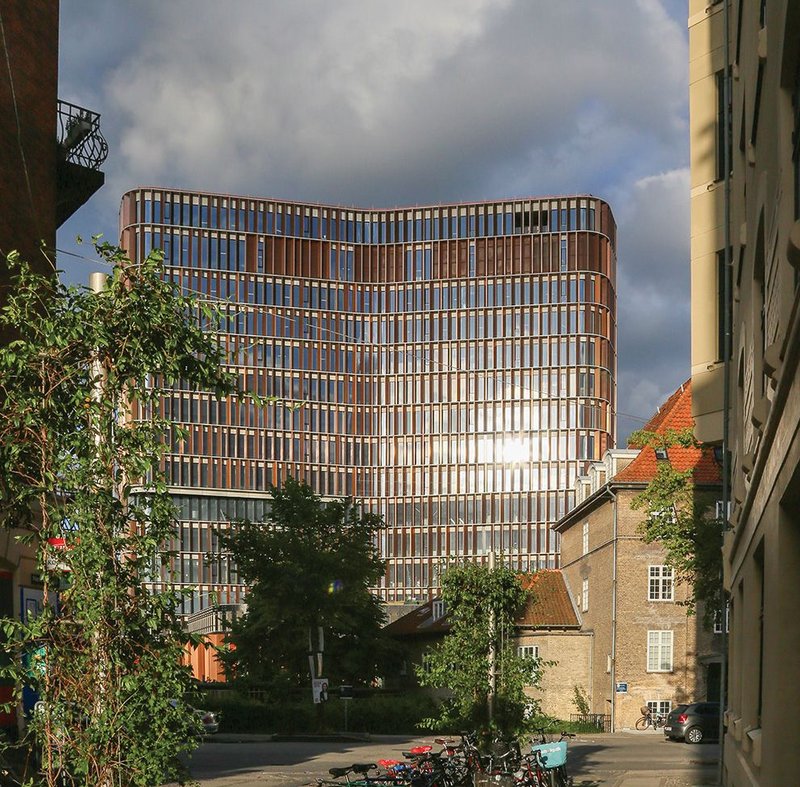 For a city predominantly characterised by six or seven storey buildings, Copenhagen’s 15-storey Panum Institute sticks out like a sore thumb. The result of a 2010 international design competition, the DKr1.5 billion (£142 million) Maersk building, a new medical research facility for Copenhagen University, sits on its campus in Nørrebro, a stone’s throw from the city’s Rigshospitalet teaching hospital. Here it is fully on display to the city, sat on the shores of the Søerne, the city’s 19th century man-made lakes. But the residents’ usual knee-jerk sensitivity to high-rise has been mitigated here by the designer of the 74m high project, CF Møller, whose ingenious and beautiful secondary cladding panels of copper mesh not only move across the glazed facade to prevent solar heat gain, but reflect in their materiality the traditional spires and domes crowning this low-rise city.

The plan form of the 42,700m2 building was developed through detailed analysis of user needs. At lower levels this meant considering not only the building’s connection to the adjacent medical campus and hospital, but also ingrained patterns of public movement across the site, which connects the Søerne to the public housing to the north. Set out in a star plan, the lower levels endeavour to create permeability for the public while devoting the space between access routes to communal academic activities, with lecture halls clearly visible from the public lobbies. The form of the ‘science tower’ above, meanwhile, was informed by the needs of academic staff, with three teams of 25 researchers on each level, resulting in the triangular plan with a central laboratory space connected by a ‘research plaza’ – a communal space promoting interaction between scientific disciplines.

Being a research facility, the dynamic cladding design needed not only to prevent solar gain to the building, but to do so while maintaining the highest possible daylight colour rendering index – which influenced the glass specification behind the panels. As project architect Jan Besiakov explains, 2010 saw the design development of triangular copper panel ‘Toblerones’ based on the section of a wing flap, ranging from 4.5-5.5m in height. The 1.3m set-out of the facade came from the sum of the 0.8m glass width combined with the 0.5m Toblerone.

Each triangular copper-coloured exterior aluminium mullion is paired with a movable aluminium frame coated with a 0.3mm copper mesh veneer and separated from the frame by neoprene gaskets. Initially perforated with small holes, this changed to a fine mesh to allow a more diffuse light to permeate the spaces rather than one characterised by light and shade. In the neutral position this mesh panel sits next to the mullion until heat sensors on the glass register direct sunlight for more than two consecutive minutes, at which point mechanical actuators set at low and high level within the facade deploy the mesh panels to mitigate heat gain. With a free area of 30%, sun and heat transmission are reduced proportionally.

While the central BMS system registers the sensors independently and raises the tantalising prospect of a ‘Mexican Wave’ facade, Besiakov thinks the effect will be more understated than that, given that there are 30 incremental positions the panels can move into, meaning shifts will be almost invisible. Both the actuator and its water resistant motor are housed externally within the triangular mullion for ease of access and maintenance. Moving panels underwent rigorous testing to ensure that the system was up to coping with the climatic extremes that it’s likely to endure over its design life. Continued exposure to temperatures of up to -30°C to freezing sleet or snow gathering on the cills is automatically registered by BMS sensors in the mechanism, disabling the actuators until the snow has melted enough to allow free movement. Panel positions were exposed at all possible angles to 34m/s wind loads at a specialist facility in Vienna – not only to check their structural integrity but to analyse possible reverberant impulses that might transfer through the unitised cladding elements and brackets and back into the concrete slab: the designers were aware that any vibration could affect readings in the sensitive lab equipment being used. Analysis put consequential vibrational load on the concrete and steel structure at 9Hz, far short of the 70Hz needed to become significant. CF Møller patented its modification of the Schueco profile, in which vertical radiators were placed in the internal mullions to counter ‘cold spots’ on the face of the glass surface.

Aware of the experiments being carried out, the firm specified the highest transparency low iron glass it could find, without resort to the prohibitively expensive iron-free versions from high temperature specialist kilns. Besiakov says CF Møller wanted to avoid performance coatings that give a green or blue ‘Moscow’ hue, aiming for a colour rendering index in excess of 95 – as good as or better than museum grade glass. Being a triple-glazed panel, any divergence from clear would effectively be trebled; the Guardian glass specified results in an overall facade U-value of 0.5.

Besiakov is unsure whether the copper facade will patinate. Other modern copper clad buildings in the city, perhaps due to reduced urban pollution, seem to have resisted accelerated oxidation and stayed brown. But the eventuality has been considered, with a large drain dug all the way around the tower’s footprint at ground level to allow possible contaminated run-off to be naturally filtered before entering the groundwater system. The additional electrical demand of the dynamic facade has also been considered, with solar PVs on the roof feeding into the grid and offsetting the building’s energy use.

Facing the city, it is only the multi-storey communal gathering areas connected by bold spiral staircases, that break the convention of the wraparound copper facade. Here a double skin ventilated facade provides the requisite external insulation levels with full height glazing, allowing daylight to enter as far back as the central concrete cores and offering amazing views over the lakes and the old city. For the 50-75 regular users of the facility on each floor such views are only bettered by the double height faculty club on the top floor. It’s a large building, but this social heart connecting the three working prongs of the scheme does lend an intimacy to the space – one reflected by the sizeable public lobbies and auditoria downstairs.

In a sense that intimacy comes out in the detailing of the copper cladding and moving screens that define the exterior aesthetic of this dramatic addition to the Copenhagen skyline. The seductive, curved, glinting copper form catches the redness of the evening light beautifully, its subtle moving facade both warm and sophisticated. ‘We always wanted it to be of a materiality that complemented the existing, significant civic buildings of the city but still pushed the boundaries’, says CF Møller partner Mads Hansen. ’That said, we didn’t want it to be like Nouvel’s Arab Institute whose demands proved too much for the technology of the time; so it’s an old fashioned, analogue facade that we’ve simply given a 21st century twist.’