Shedkm has introduced a super-versatile, factory-made modular home to New Islington, which points to the future Urban Splash was always driving towards 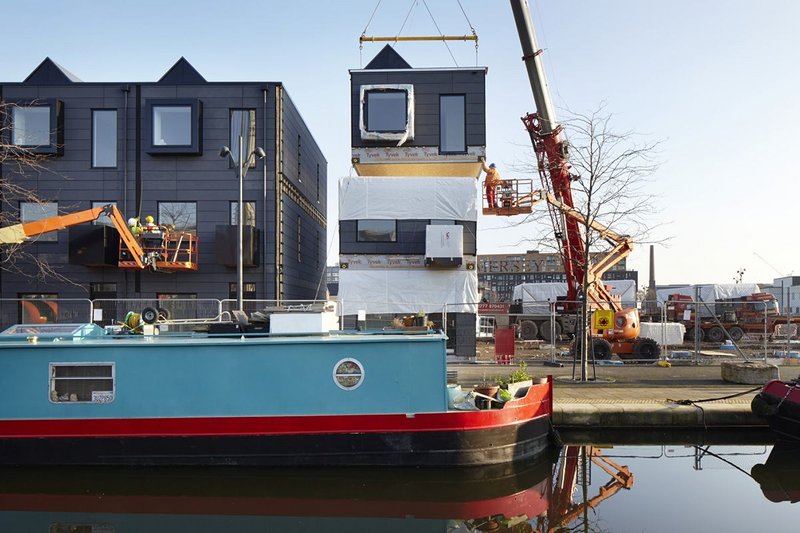 Craning the volume of each floor into place. Credit: Jack Hobhouse

Housing exhibitions have never really taken off in England, even the Europan winning designs never got built. But over in Manchester’s New Islington, Urban Splash has been experimenting for years and through economic cycles with different housing and modes of development. Here is where all the talk about custom building is finally finding a form, and it’s one that is also efficiently radical in its use of modern methods of construction. The product, for that is what it is becoming, is hoUSe.

The trademark ‘hoUSe’ tells you where Urban Splash thinks it fits: a new brand for consumers. And a new sustainable way of working for the company, that doesn’t rely on huge upfront investment with grants and cash all tied up until the front door and lobby to tens of units is complete. The sort of arrangement that led the developer into a major debt renegotiation. This is a different model with sites lined up in Newcastle and Irwell Riverside, Salford. Speaking to the RIBA Journal last year Urban Splash’s Tom Bloxham set out the scale of ambition: ‘I want to be building hundreds, if not thousands, of these homes in a few years’ time.’

Ambition is to be expected from Bloxham. New Islington, separated from central Manchester by just Great Ancoats Street and Toys R Us, has become a de facto housing exhibition over its slow build out. Compared to 1927’s modernist collection of the Weissenhofsiedlung, the innovative oddities of Hamburg’s International Building Exhibition or the vernacular reinterpretations of Scottish Housing Expo, this is a piecemeal and showy melange, that doesn’t yet hold together. But the supergraphics and cantilevers of Will Alsop’s Chips proved pioneering for city centre apartments. And Fat’s social housing, Woodward Square, with its cardboard cut out approximations of ‘home’ in a Dutch style, is still unexpected alongside the existing estate – while Mae Architects’ The Guts disguises reinvention behind very housy exteriors. Mae in fact has been at the forefront of working out ways to deliver custom build, you can see it laid out at the RIBA’s current exhibition, At Home in Britain: Designing the House of Tomorrow.

But the initial manifestations of hoUSe are designed by shedkm. There are just 43 of them so far. They sit alongside the canal, very plainly. Urban Splash co-founder and shedkm director Jonathan Falkingham draws a picture of the Splash apartment buyer growing up and having to move out of the city centre to the suburbs for their family home, perhaps to a terrace with five years work on reconfiguring it, or to a modern house without personality and low ‘Wimpey’ ceilings. Splash wanted terraces and family houses.

What shedkm brought was its plan for how to design a house to offer choice to those buying it. Living space can be at different levels (‘loft living’ or ‘garden living’), it can be cellular or open plan and at the centre is the serviced zone for bathrooms and kitchens, on whichever layer they are added. Add in cupboards, finishes and colour and the team calculated there were 10,000 different house types. It has now honed them down to 72 and a clear decision making tree.

To make these homes stack up for the Manchester market they have to be £100/ft2. But how? HoUSe is factory made, part driven by cost, part by trying to offer the customer customisation. ‘The way to build is not an end in itself,’ explains Falkingham. Projects driven by modern methods of construction, from Caspar in Leeds through Peabody’s Murray Grove to RSHP’s Oxley Woods in Milton Keynes, may have proved a boost for MMC in the housing industry – recently released research by NHBC Foundation shows that 98% of housebuilders have used or considered using these methods in the form of small scale assembly. But only 37% of housebuilders are even considering volumetric designs. And Falkingham would argue that even with these they are producing very similar end products. HoUSe is different for its consumers.

It did, however, take five years of active development. During this time shedkm drew down only minimal fees, part of the payback is a stake in the rewards from the development, as well as the risks. The result is an insulated timber cassette structure from SIG, all put together in volumetric form. Wet trades were minimised in favour of joinery, which makes for a nice interior feel. Even bathrooms are installed at the factory. The volumes of each floor are then transported by lorry to the site and stacked up on the concrete foundations of this scaffold-free site. Inside the spaces are airy, especially the top floor which has been gifted the lofty underside of the dinky pitched roof. The benefit of custom build goes to its first owners and Urban Splash, which can differentiate itself in the market – although the buildings’ structure means they will be reconfigurable internally.

External materiality took a little while to resolve. But eventually the design followed the logic of the construction. The original designs had a brick cladding. ‘We didn’t want to challenge the traditional look of a house,’ says Ian Killick of Shedkm. ‘We wanted it to be familiar.’ But with most other work shifted to prefabrication brick and mortar didn’t seem to make sense. ‘It seemed crazy doing a brick wall on site,’ esplains Killick. So this batch of hoUSe is clad in fibre cement board.

The result is rather monolithic, the terrace rather like a shoe box landed alongside the canal with a few holes cut out and a triangle of card glued on top. There is articulation in the bay windows and the projecting balconies but the flush neatness still seems a little suspect to an eye trained on traditional constructions. But the whole of New Islington takes a little adjusting to, and that seems entirely worthwhile for the experimental nature of the site and, possibly, the housing progress it demonstrates.