Amid Oxfordshire’s rolling fields and ancient trees stands Ripon Theological College, an Anglican seminary and its collegiate buildings, built of warm Cotswold stone by GE Street in the 1850s. They have now been joined by the new Bishop Edward King Chapel, designed by Niall McLaughlin Architects.

The Clipsham stone chapel is elliptical, a shape McLaughlin says was inspired by churches designed by Rudolf Schwarz and Peter Zumthor. The walls are of smooth ashlar stone at lower levels, a mid level of alternating smooth and rough coursed stone and a deep and delicate clerestory of glass with fine stone mullions between at the top. A timber door links the chapel to a separate single-storey sacristy, toilets and storage.

Also elliptical in plan is the internal volume, a serene and light-filled place of worship with the altar and a solid oak lectern semi-enclosed in an inner ellipse created by lofty glulam arches which rise and curve to create an open diagrid above it. The use of an ellipse, a geometrical figure with two centres, allows worship to focus on either the rituals of the Eucharist or on the spoken word: the altar is placed at one curved end, the lectern at the other. The seating plan is ‘antiphonal’ with two banks of congregation facing each other on fixed benches made of ash.

An ambulatory is created by the space between the arched enclosure and the external wall. ‘The movement inherent in the geometry is expressed in the chapel through the perimeter ambulatory,’ explains McLaughlin. ‘It is possible to walk around the chapel, looking into the brighter space in the centre. The sense of looking into an illuminated clearing goes back to the earliest churches. We made a clearing to gather in the light.’

Around the ambulatory are single-storey niches which extend beyond the walls. One houses a wedge-shaped oriel window, another the space for the tabernacle, and the largest is a prayer room for the sisters to recite their offices, a top-lit space with a carefully framed view towards the altar.

The structure can be divided into two independent and self-supporting parts; first the external wall, secondly the roof structure – glulam columns and lattice diagrid.

Inherently a very strong shape, the ellipse of the external wall relieves the 10m high wall of any need for restraint at the top. Using concrete for the wall structure worked well, in terms of movement, with the outer stone leaf and internal lime plaster finish. Plans for an in-situ concrete wall were discarded due to the prohibitive costs of elliptical formwork; instead it was constructed of hollow concrete blocks with reinforced concrete infill.

The apexes of the inverted trusses rest on a 150mm by 80mm rectangular hollow section (RHS) which runs along the tops of the curved diagrid of glulam beams and columns. At the curved ends of the ellipse the trusses fan out, supported at the ends of the RHS. With this support only lateral restraint was required where the roof trusses meet the glulam columns at the top of the clerestory mullions.

Glulam was chosen for the internal timber structure for its ability to create elegant curved columns and beams. A series of portalised columns, set in an ellipse on plan, curve inwards into the elegant open diagrid which arches over the centre of the chapel. Single 60mm thick glulam columns (tapering from 300mm to 430mm) run at the curved ends of the ellipse. Other columns are each formed of three separate glulam members; two 60mm thick outer members tapering from 300 to 560mm and a central 60mm thick member tapering from 200 to 440mm, all screwed together by timber fillets, filled and plugged. As they rise, the outer members curve inwards in different directions, connecting to adjacent glulam members to form the diagrid, while the central member curves upwards in the opposite direction to meet the clerestory mullions.

The spruce glulam components, produced by Cowley Timberwork, were CNC machined to profile and to create their concealed connections, then cut and finger-jointed to produce the curved haunches of the portalised columns. A channel was cut into the top of the glulam rafter section to house and conceal cables and lights. The glulam structure was fabricated off-site with individual elements then craned and bolted into place. This allowed for the very precise machining required to achieve the sweeping curves and concealed connections and fabricating components, to +0/-1mm tolerance.

The materials of the chapel interior – stone, lime plaster, ash furniture, oak doors and spruce glulam columns – share similar natural colours; the glulam was treated with a two-part stain, giving it a light, white-washed appearance. The restrained palette allows the play of light from the glass clerestory to dominate the interior.

The 13.5m high bell tower is a free-standing timber structure consisting of two diamond-shaped, glulam oak columns, each profiled from 250mm by 800mm sections. These cantilever from the concrete foundations. Stainless steel rods were resin-fixed into the base of the oak and bolted to a stainless steel plate cast into the foundations. The columns are reasonably deep and slender in section. They cantilever in their deep direction but work together as a cantilever Vierendeel truss in their narrow direction. 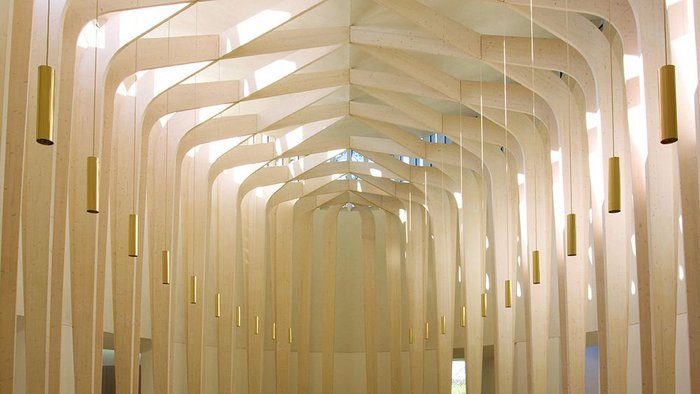 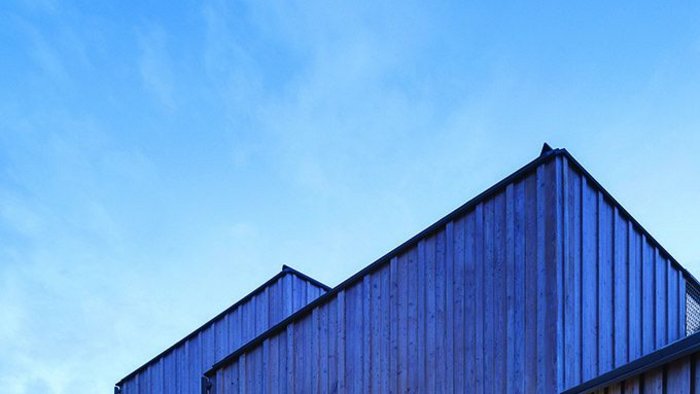 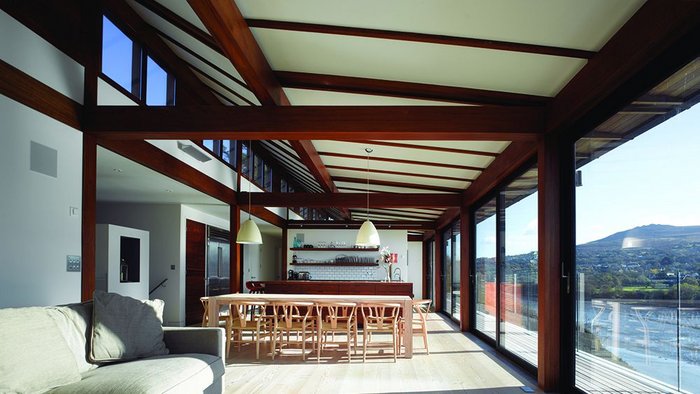