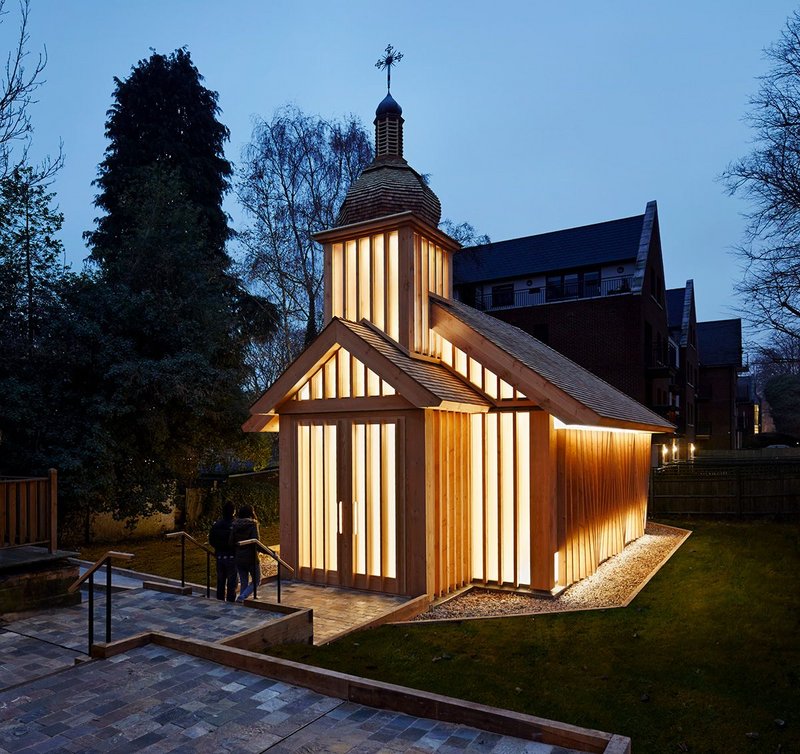 Inspired by the historic wooden chapels of rural Belarus, the diminutive Memorial Chapel in Woodside Park, north London, was designed by Spheron Architects as a focal point for the Belarusian diaspora community in the UK.

At first sight it appears to be a simple and traditional design, but this is rather deceptive. Although all-wood like its Belarusian predecessors, this exquisite, 69m2 church was made using contemporary prefabrication methods. Nor is it a faithful reproduction – Spheron was determined to avoid replica or pastiche while still creating a chapel with a recognisably Belarusian heritage. The result is a building potent with bittersweet memory and emotional charge; it’s no wonder that some were moved to tears at its consecration last December.

For this tranquil chapel is a memorial to the victims of the 1986 Chernobyl nuclear disaster which had such a disastrous impact on Belarus. While the accident itself happened in Ukraine, 70% of the fallout was in Belarus, leading to the abandonment and razing of many villages and the displacement of thousands of people. The chapel commemorates not only the loss of life after Chernobyl but also the loss of homeland and cultural identity for those who subsequently left their homes and country. Before Chernobyl, Belarus had suffered other terrible losses such as the Second World War atrocities committed by the Nazi occupation – which included torching churches full of people seeking sanctuary. Further back still, the gradual Russification of the area led to a steady erosion of Belarus culture.

Spheron’s uplifting design in London touches on several of these aspects – sometimes overtly in the references to a pre-Russian, Belarusian architectural style, and sometimes more subtly while at the same time striving to create a contemporary building that evokes a memory of the homeland.

‘Instead of designing a copy of wooden churches of Belarus, it was important to build a British building inspired by those churches,’ says Tszwai So of Spheron Architects.

It’s been a labour of love for the small south London practice. So initially met members of the community in 2007, but it wasn’t until 2012 shortly after Spheron was set up that the practice was officially commissioned after carrying out a feasibility study. So went on a field trip to Belarus to find out about the design of traditional churches and later even learnt to read Cyrillic lettering to aid his research. It was several more years before the £364,000 funding was secured to build the chapel in the garden of Marian House, the Belarusian community building where worship had previously taken place. The first wooden church to be built in London since the Great Fire of 1666, it is intended as a ‘visible spiritual token’ of the presence of people of Belarusian descent in the UK, according to Mikalaj Packajeu, chairman of the Association of Belarusians in Great Britain.

The building was planned along broadly traditional lines with a bell tower at the entrance leading to the nave and a raised altar in the apse. According to religious tradition, there are three doors in the altar screen to allow a circular procession through side doors to and from the altar. And like traditional Belarusian country churches, the predominant material is wood – used here for floor, walls, roof and frame, even the tactile door handles, decorative vents and external door stop. The result is both visual harmony and, on the inside, a distinctive timber aroma.

This chapel could easily have ended up as a quaint wooden oddity marooned out of time and habitat in London suburbia. But Spheron has avoided this by introducing non-traditional twists that give the design a contemporary rather than purely historical resonance.

Rather than following the traditional wooden build, Spheron has used CNC cutting and prefabricated building methods to create a truly international construction – Douglas fir from England for the frame; a Spanish-made cross laminated timber (CLT) infill wall instead of hand built, log-piled walls; and cedar shingles from Canada for the roof and the determinedly Belarusian -style cupola. Built by Timberwright, the post and beam system is actually very English, according to the architect. Its comparatively light weight also allows the building to touch the site as lightly as possible in response to the need to protect the roots of protected lime trees nearby.

Inside, the most distinctive part of the design is Spheron’s treatment of light.

‘Traditional Belarusian churches are quite dark. In the design process, one of the main things we worked on was bringing in as much light as possible,’ says Sam Bentil-Mensah of Spheron.

This had to be balanced with privacy. The solution was three fold. At the entrance of the chapel, vertical ribs are interspersed with frosted, glazed panels rising the full height of the bell tower to admit light. A clerestory window above the long flank walls brings in light at an upper level, supplemented at the base of the walls by bands of further frosted glazing. This gives ample light in daytime, giving the wooden walls the impression of hovering between the two bands of light. The same effect is achieved at night with carefully concealed lighting.

Although the interior walls are designed to one day accommodate religious imagery, the relatively unadorned state of the interior at the time of consecration creates a harmonious and calm effect that would be hard to beat.

When internally lit at night, the glowing chapel resembles a lantern, subconsciously referencing the burning of churches during the Second World War. 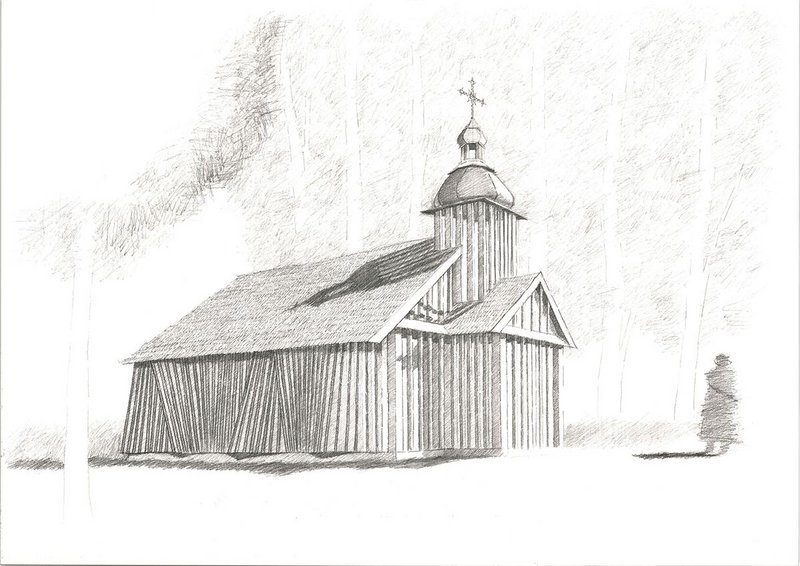 Conceptual design for the chapel by Tszwai So of Spheron Architects.

Externally, Spheron breaks with the traditional church form through the use of timber vertical ribs designed with varying depths to give a gentle flounce that animates the long elevations. This pleasing touch – apparently a reference to Baroque stone churches – is achieved with minimum expense since only five different depths of rib are required to create the undulating effect.

‘Everything is very low cost, which is good because that’s how a village church would be,’ says So, adding that it’s been a ‘dream come true’ for the practice finally to realise such a special building.

The endeavour may well be rewarded by further such projects – Spheron is already talking to a community of monks in Belgium about designing another small wooden chapel. Meanwhile, the Belarusian community in London can at long last begin to enjoy a dedicated place of worship after some 70 years of makeshift arrangements and unrealised plans. Finally, they have a little piece of home.