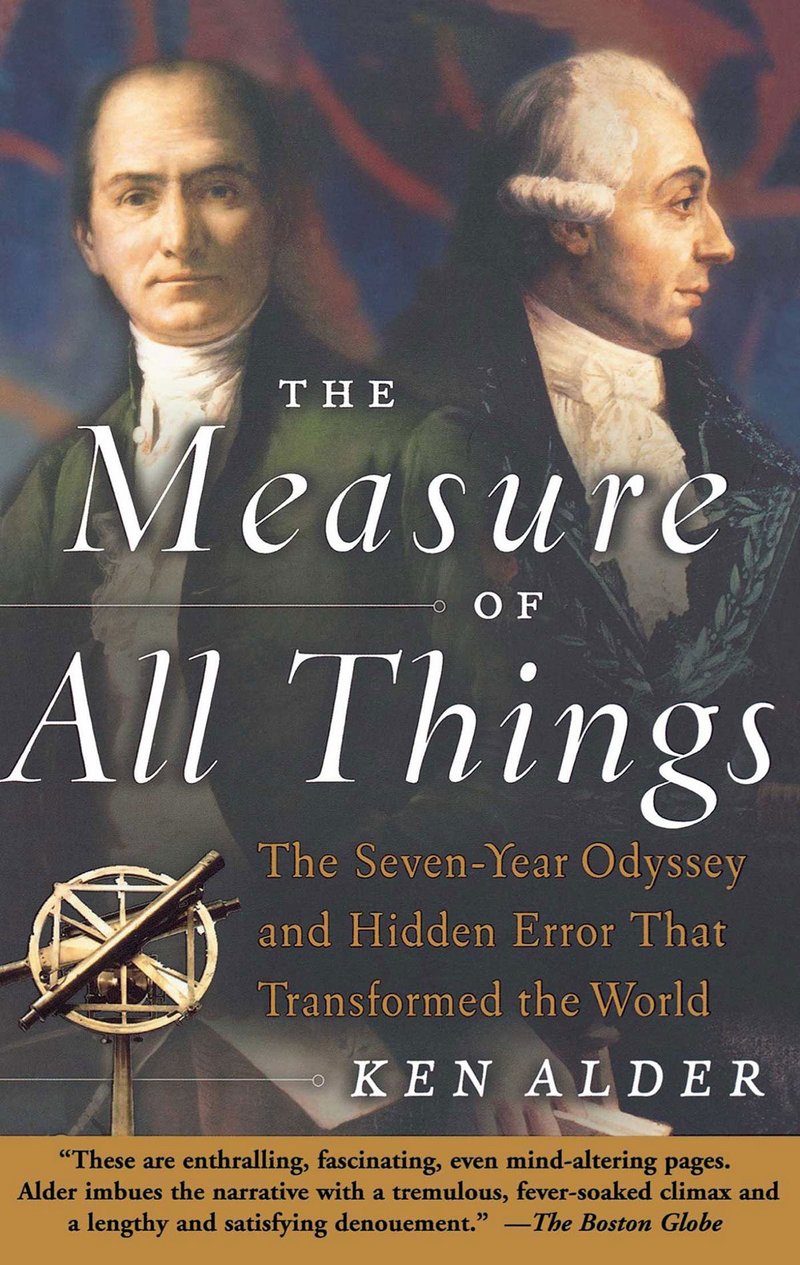 The Measure of All Things – The Seven-Year Odyssey and Hidden Error That Transformed the World, by Ken Alder, Free Press, 2003

The Measure of All Things is a factual account which reads like a rip-roaring scientific yarn with subtle twists serving as a gateway to relativism – and more usefully defining post-modernism. It illustrates that post-modernism and its necessary ethical framework are a 2,500 year old condition.

I first read this when it was first published, a decade or so after the lectures I heard at university on post-modernity concluded without resolution. I picked it up again recently after re-reading Richard Sennett’s The Craftsman, prompted in particular by its discussion of skill controlled by ethics.

The bookraises the question of why relativism, intrinsic to the scientific method for more than 200 years, has struggled to migrate its ancient message to architecture.

It is the true story of two scientists at the time of the French Revolution who were asked to survey the land from Dunkirk to Barcelona to extrapolate the full circumference of the earth. This would then be equally subdivided to determine a universal unit for the metre. At the time, all measurements, whether liquid or length, were subject to regional variation which pre and post-revolutionary French governments were determined to unify for ease of internal and ultimately external trade.

The younger Jean-Baptiste-Joseph Delambre headed north to Dunkirk and finished his work early, while the older, establishment-figure Pierre-François-André Méchain worked his way south to Barcelona. There he remained, convinced his survey was flawed as it did not extrapolate a perfect Newtonian sphere. By contrast Delambre, closer to a scientist as we understand them today, allowed observation to inform his conclusion. The earth was evidently not a perfect sphere, its subdivision into equal parts to define the metre was not possible; some degree of approximation – a factor of error – had to be accepted. In the end, Delambre suppressed Méchain’s conclusion not because he believed him to have mismeasured but so that his political audience would accept the universal measurement, without needing to know that it was in essence somewhat approximated.

This negotiated/accepted factor of error, common in all parts of science today is this philosophical and ethical position that gives Alder the title of the book. The phrase is attributed to the ancient Greek Sophist Protagoras (450BC): ‘Of all things the measure is mankind / Of the things that are, that they are / Of things that are not, that they are not’.

This is interpreted as meaning that there is no objective truth. We are free to perceive and understand the world as we wish, there is no ethical position to enforce one viewpoint on another, yet when collaboration is required, we must negotiate values for our common purpose.

Alder’s book is a good introduction to Protagoras and the disciplines of ethics and law that he left to the sciences to establish. He is considered the first recorded relativist and today would be thought of as a postmodernist. My introduction to post-modernism was through simultaneous lectures at Edinburgh University’s departments for art history and of architecture. The first began with 1970’s post-structuralists, the latter presented it as yet another style in the taxonomy in the history of architecture.

Putting noun before verb, product before process is in many respects an error in art and architectural education dating back to the mid-18th century publications of Johann Winckelmann and instituted by predecessors of the RIBA, who firmly removed the need to work with and understand materials as had been standard before them.

During the 16th century, Giorgio Vasari argued against the umbrella taxonomy of ‘style’ but for ‘manner’, the idiosyncratic craft and biography of the artist and architect. In his first publication, Vasari emphasised the cultural strength in allowing individuals to learn their craft through apprenticed labour (animal laborans) excelling in the ‘how?’ before improvising and innovating to become ‘most excellent’ and contributing to society (homo faber), the ‘why?’ A freedom for all, not an orthodoxy, and while this relativism did not concern Vasari, it did Protagoras as it does us today.

Let’s add architects to the list of surgeons, scientists, musicians, software writers et al to illustrate skill that may come after 10,000 hours of rote labour but agreed values (homo faber) will give it ethical purpose, reinform and direct that creativity.

To define this perhaps more prosaically for architecture, we can agree that structures ought to remain standing without inspection for so many years, that they don’t catch fire or remain safe for so many hours during it, that they require low energy use, have a low if not negative embodied carbon, and so on. All this is without needing to stipulate ‘style’, leaving idiosyncratic ‘manner’, the craft and skill to the architect and its client. As Protagoras illustrates ‘The way I and you dress is our business alone, I have no more ethical position to tell you to put a coat on because I feel cold than telling you to wear one colour instead of another’.

We are free to perceive and understand the world as we wish, there is no ethical position to enforce one viewpoint on another, yet when collaboration is required, we must negotiate values for our common purpose

I’d recommend The Measure of All Things as a well-written, scientific documentary, and a gateway read into relativism, and the responsibility that comes with the liberation from orthodoxy. Observation, testing and negotiation may be the vertiginous path of relativity and the unknown outcome that defines the postmodern condition, but it does come with freedom for and inclusion of all.

Amin Taha is director of Groupwork

The Measure of All Things – The Seven-Year Odyssey and Hidden Error That Transformed the World by Ken Alder, Free Press, 2003, £12.99