1928 rolled round, and in the pages of the RIBA Journal it at first seemed business as usual: learned articles about the Parthenon, correspondence about the structural and aesthetic rationale of Chinese pagodas, and a member proudly describing how he had made a bamboo rod in five sections stretching to 25ft 9in with a hook at the top ‘to which one may attach the ring of a measuring tape. This I find is the easiest way of measuring buildings without the bother of ladders, etc.’

But outside this cosy world, something momentous was happening: modernism. It was affecting Europe, Scandinavia, and even, transitionally, England: Peter Behrens had recently completed ‘New Ways’, a house in Northamptonshire for the toy-making Bassett-Lowke family. The RIBA could ignore the phenomenon no longer: in May 1928 it called a debate. Speaking in favour of modernism: the free-thinking, witty Arthur Beresford Pite. Speaking against: stuffed shirt Sir Reginald Blomfield, RA (‘a close student of the Greeks and their work’). In the audience: at least some younger people, as noted by President Walter Tapper.

Pite, well into his sixties, was evangelical about the coming change. Goading Tapper, a noted old-school church architect, he said: ‘When St Paul’s burned down, it was rebuilt in the modern style, though I suppose you, sir, would have urged the Institute and every member of it to petition the government that it should have been rebuilt as it was before.’

Then he laid into the whole profession. ‘Our difficulty is that we have been entirely submerged since that date by an effete and feeble striving after antiquity. Our eyes are in the back of our heads, instead of in the front; we can see nothing straight… We want waking up; we want stirring out of this absurd reactionary want of courage, this inability to design, which has tied us down to the past for many generations’.

The Continent, averred Pite, was ‘striving with violence to get rid of the classical tradition and to create a style which is indescribable. The Germans have invented a word for it – ‘Sachlichkeit’.’ For Pite, this had all started in England with Morris, Crane and Burne-Jones. ‘It is for us to develop it; resolutely turning our faces forward, instead of backward.’

Blomfield, in his early seventies, lapsed into French, Greek and Latin quotes and rhapsodised over the Eclogues of Virgil. ‘I would urge our ‘modernists’ to think again. They have plenty of energy and ability, and we older men take a genuine interest in what they are doing, but to us it seems a pity that they should waste their labours on experiments which our wider experience leads us to think may end in smoke.’ Shudderingly, he added that modernism was like the ‘atonal’ music of ‘Herr Schoenberg’.

And what did the young ‘uns in the audience think? One JW Mackail remarked: ‘Only the other day I saw, not a hundred miles from London, a building – if I may so call it – which had proportion and had a strange beauty. It was a gasometer.’

But the atmosphere was thick with compromise. Le Corbusier? Nobody had a good word for him, least of all the youngish Harry Goodhart-Rendel. ‘I think he is one of those men who are born old-fashioned. I think he has the worst Victorian ethical view of architecture, and he only manages to be heard because he talks a great deal and is very noisy.’

Everyone ignored Behrens, then 60, as a forerunner of the modernist tide. But some of his drawings for New Ways found their way eventually into the RIBA collections, so for context we reproduce two of them here. 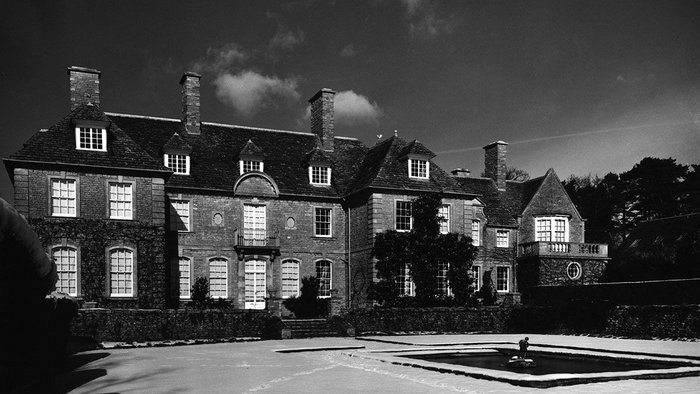