Ordinary Architecture explores and develops the origin myths of architecture 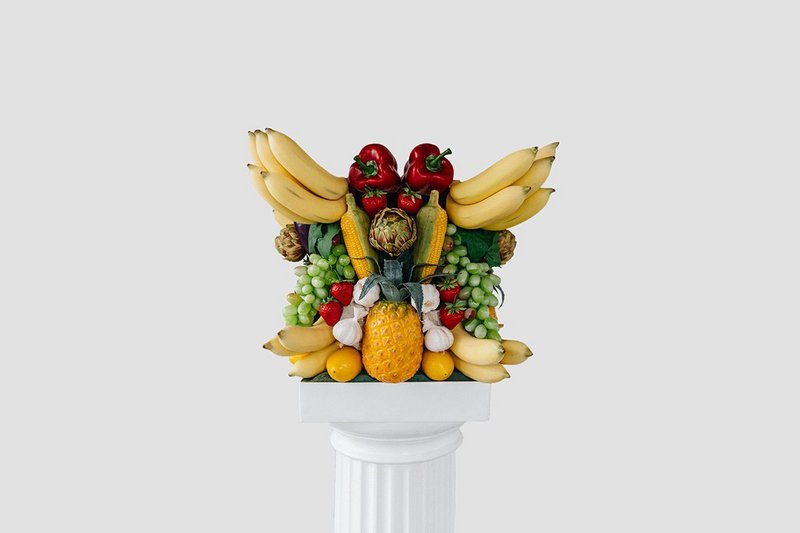 A recreation of the Greengrocer’s Order in its original state when saturated in rich, polychromatic colour. Credit: Dunja Opalko

We may well be familiar with the Vitruvian theory of the primitive hut as the origin of architecture, the felled tree becoming a column and fixings evolving into capitals. But how about the idea of bound prisoners and dripping blood as the beginnings of an architectural order? Or a reworking of classical cornices with extrusions of the coastlines of British counties, or with capitals inspired by a bunch of fruit and veg from a greengrocers as an alternative to the traditional acanthus leaves of the Corinthian style?

All this, and a lot more, is packed into Origins, a series of episodic interventions by Charles Holland and Elly Ward of Ordinary Architecture at the Royal Academy opening on October 15. The ongoing 250th anniversary refurbishment of Burlington House gave the opportunity to stage these in the very fabric of the building, itself loaded with the RA’s pedagogic role promoting art and architecture over the centuries. Ceiling roundels, wall niches, capitals, staircases are all dramatically appropriated as well as the Architecture Room, which crystallises the practice’s own treatise on the origin myths embodied in contemporary architecture.

The cultural and narrative meanings of architectural language is a subject very close to the heart of Ordinary Architecture, and it’s clear that the pair has had a lot of fun tackling varying responses to this most fundamental of questions – the origin myths of architecture – in their customary pop-influenced visual style.

‘The veracity of myths is less important to us than the fact they exist. A building become architecture through its capacity to contain meaning and stories,’ says Holland. 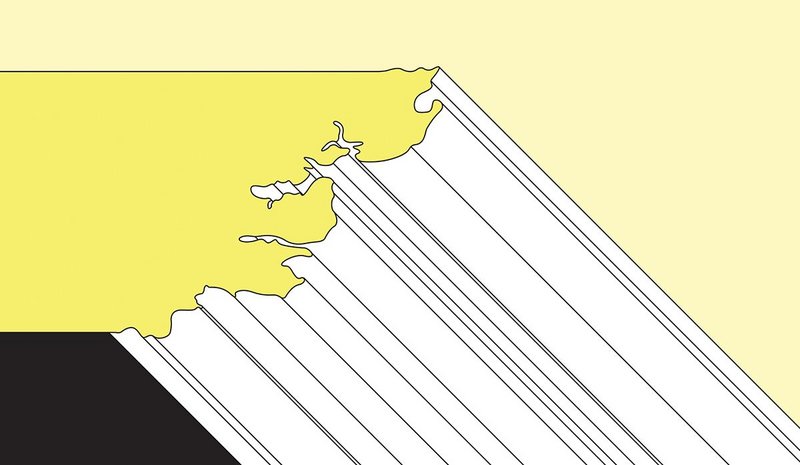 Ordinary researched a variety of great origin theories ranging from Vitruvius and Palladio through to modern architecture theorists such as Sigfried Giedion and Colin Rowe, and considered how these have been appropriated by others over the years. They were particularly interested in Gottfried Semper’s theory of cladding. Derived from animal skins and textiles stitched together and hung to form rooms, this represents a pattern rather than a tectonic approach to architecture.

Texts on the origins of architecture from the RA library are exhibited in the Print Room, along with drawings by Academicians including Piranesi and James Stirling. Here Ordinary also shows a fluted column topped with its own fruit and veg-laden Greengrocer’s Order, a reinterpretation of the Corinthian order – as seen in the practice’s first contribution to ribaj.com. This is arranged opposite, and in dialogue with, a drawing by Royal Academy co-founder William Chambers of the conventional Corinthian order.

Ordinary’s own interventions are grouped into themes of construction, space, shelter and decoration. At the entrance – Ordinary temporarily replaces nine paintings including Benjamin West’s The Graces Unveiling Nature with a pop-style celestial scene looking up to heaven.

‘Conceptually and stylistically, it's the polar opposite of the paintings,’ says Ward.

Two wall panels alongside the main staircase explore contrasting ideas of modern and classical space, representing bonded and infinite spatial concepts. These lead to an installation of a classical column and steel I-beam, both slightly distorted in an axonometric way, in niches on either side.

At the Norman Shaw-designed stairs, Ordinary is installing stitched-together hides with a painted graphic by Ordinary, inspired by Semper’s theory of cladding. The Sackler Wing has two more new interventions – cornices extruded in the coastline of Cornwall and Essex, the latter apparently the most successful because of its plentiful inlets and estuaries.

In the Architecture Room, Ordinary presents its own origin theory which seeks to understand the cultural meanings of the most humble and ordinary aspects of contemporary architecture, from chimney pots to damp proof membranes through its own take on the four classical elements of fire, water, earth and air.

‘There are cultural yearnings in even the most pragmatic piece of architecture,’ says Holland.

Ward hopes its dramatic and playful interventions will appeal beyond architectural audiences.

‘I hope visitors enjoy the thought process we’ve been through, taking origin myths and translating them into our own thinking. I hope people come with us on that journey,’ she says, adding that it’s also fine if the interventions just raise a smile for those passing by on their way to Abstract Expressionism.