Entering the age of Eden: ‘I asked them for the eighth wonder of the world, and I got it’ 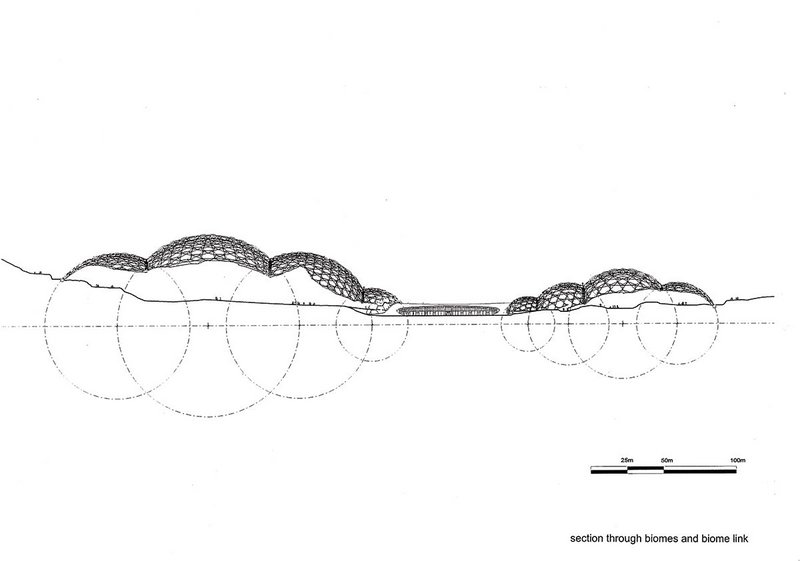 To say the 2000s would be an eventful decade for Grimshaw seems like something of an understatement. Despite the financial crash in 2008, the practice would almost triple in size, open offices in the United States and Australia and completely change the way it was organised, not to mention its name. The eponymous Nicholas Grimshaw would be knighted in 2002, then take on the role of president of London’s Royal Academy of Arts in 2004 (until 2011) as part of a process of very gradual secession to the new generation of partners coming up through the ranks.

And then there are the buildings. This period would start with the opening of perhaps the most iconic – in a good sense – of structures by the practice to date, the Eden Project Biomes (2001). These were part of a scheme that also included masterplanning (2001) the old quarry site and other buildings including the Visitor’s Centre (2000), with its tensile roof, the Foundation Building (2002) and the pine-cone-like Core building (2005). A testament to the power of this architecture is that the Eden Project is a client to this day, with six more international examples being planned.

Eden was one of four millennium projects that the then Nicholas Grimshaw & Partners won at the end of the 1990s. The practice opted to be a big fish in a small pond – and only go for projects outside of London. As well as Eden, the decade also saw the completion of the National Space Centre in Leicester (2001) and the Thermae Bath Spa, which finally completed in 2006 after protracted court battles with contractors.

But it was Eden, and in particular the Biomes, that would prove pivotal, changing the very perception of the practice and helping it to move into new areas in the coming 10 years embracing the arts, education and science. In a way, it also gave the practice a new sense of freedom to experiment with form – while still making sure it adhered strictly to function.

The Biomes, headed up by Nicholas Grimshaw and partner Andrew Whalley, were not simple – it’s not often you have a plot where large parts are prone to disappear, as some of the cliff in the sunken Cornwall site did.

This was the practice’s first project to be modelled entirely in 3D, which allowed a greater freedom. Continuing the component-led approach of the International Terminal at Waterloo (with ETFE replacing glass), computer modelling meant each piece could be different, and they were delivered to the site as a numbered kit-of-parts, even if they weren’t packed in order. But it was the original idea that was the flash of brilliance. The Frei Otto-esque soap bubbles – lightweight structures spanning huge volumes (something the practice had proven skills at), while also hugging the contours of a site with wildly differing levels – were not only hugely practical but uniquely enchanting, and captured the world’s imagination.

The nature of Nicholas Grimshaw & Partners was changing. There were now more partners as well as directors looking to make their mark. In 2002 the name changed to simply Grimshaw, in a no-nonsense Arup sort of a way. Then later, in 2007, it became a limited liability partnership (LLP) with 13 partners. Sale of the long-term office in London’s Fitzroy Square allowed Grimshaw and the existing partners to release their equity, thereby making it easier to create new partners who no longer had literally to ‘buy in’ to the practice. This is the ‘naked in – naked out’ approach, as Grimshaw puts it.

This was now a more agile structure that also spread responsibility around and in so doing also changed the nature of the architecture coming out of the practice. It became more diverse, the product of a series of partners – all sharing that Grimshaw DNA (legibility, adaptability and sustainability, along with listening and networks) – but not now all the singular vision of Nick Grimshaw. Witness such projects as 2008’s London School of Economics’ New Academic Building, a Tardis of a hugely dramatic, massive space opening up behind a retained Edwardian neoclassical facade (through definitely not a piece of facadism). Or the Experimental Media and Performing Arts Center (EMPAC) at Troy in New York state, where a world-class concert hall sits like a golden egg within a huge glass museum vitrine. Would anyone have pegged these two as Grimshaw at the start of the decade?

These two buildings also represent new areas that opened up in the decade: education and the arts. Another notable arts building is the Caixa Galicia Foundation in La Coruña, Spain (2006). Initially won in competition, like the majority of Grimshaw’s work during this period, a whole new auditorium was later added to the scheme. Since this was a sensitive city-centre site with a fixed roof line, the only way was… down, through some 35m of solid granite. A parabolic form sloping inwards at the front helps bring light into the lower areas. In the daytime the building looks like it’s made of solid stone, but at night, the stone – thin marble – glows when lit from within.

This new materiality was something that marked out this period for Grimshaw. Lloyds Banking Group Headquarters (2002) in the City of London also reacts to its context by using stone as a curtain wall, while Thermae Bath Spa uses solid stone tectonically in what one partner describes as ‘the practice’s first modernist building’.

Back in London, the practice’s University College London Cancer Institute: Paul O’Gorman Building (2007) experimented with terracotta fins on its facade, picking up on the rhythm of the street, fronting a high-tech (in the non-architectural sense) and highly sustainable building within.

But, while the practice was moving into new materials and new areas, certain mainstays continued – in particular the large-span ‘sheds’ and the transport work.The decade began with the opening of the new Frankfurt Messehalle (2001) providing what is still today one of the largest column-free spaces in Europe. Buried into the ground, the Rolls-Royce Manufacturing Plant and Headquarters (2003), in beautiful countryside in West Sussex, provided an elegant, adaptable factory structure in keeping with the Grimshaw tradition. Zurich Airport came on line in 2004 – Landside Centre sitting above and connecting into the public transport system, with 30 extra check-in desks, and the dynamic Airside Centre, the airport’s main hub, connecting two older terminals.

To complete Southern Cross, Grimshaw set up its second office abroad, in Melbourne. The first office outside the UK had opened in 2001 in post 9/11 New York, prompted by the successful opening of the Donald Danforth Plant Science Center in St Louis (2001) and a feeling that there was work to be won in the US. There was – the Fulton Center transportation hub in the heart of the city (which completed in 2014) was an early practice win. Soon after, the New York office made it on to Mayor Bloomberg’s Construction and Design Excellence Initiative list of eight architects allowed to bid for public projects over $5 million. It was then able to compete for (and win) a raft of public work during the 2000s.

So, by 2010, Grimshaw was a very different beast from that which had existed a decade before. It was bigger, more global, more diversified and more agile, with a series of projects in the pipeline, including the Fulton Center, the Queens Museum and Via Verde, all New York; the Ecorium in Seochan, South Korea; and, back in London, the Cutty Sark and Heathrow Airport Terminal Two Concourse B, that would see it transition smoothly into the next decade.

Grimshaw in the 2000s: a visual timeline

Grimshaw in the 1980s: A new kind of functionalism