Hugh Pearman looks back over the achievements of Sir Nicholas Grimshaw, 2019 recipient of the RIBA Royal Gold Medal 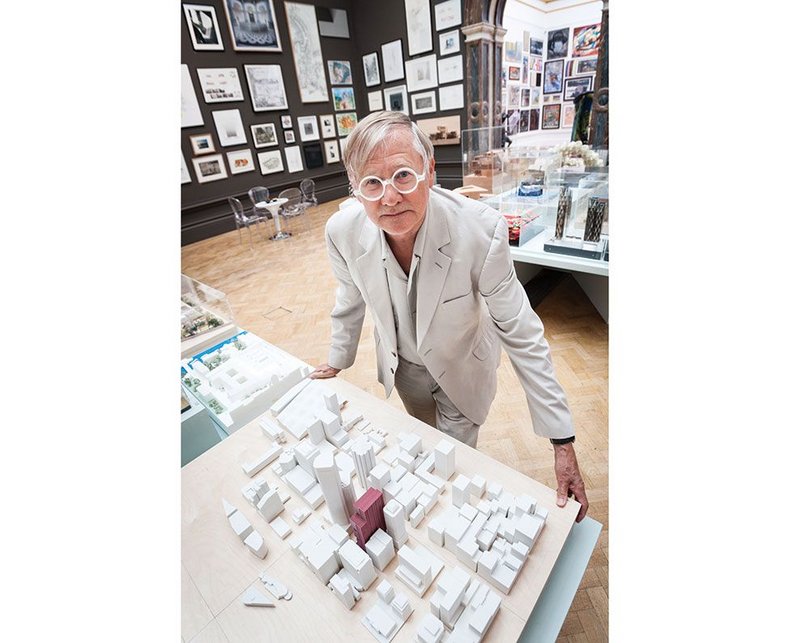 Sir Nicholas Grimshaw has always demonstrated three things – beyond a highly developed aesthetic sense – that are necessary to make good architecture. First, you need to understand your materials, your components, how they are made, how they behave. Second, don’t close down options for a building’s future: allow maximum flexibility and clear space. Finally, you need to take time. Not in the sense of ‘slow architecture’ – his buildings have often if not always been designed for rapid construction – but in the sense of the practitioner needing to gain experience. ‘It’s difficult, architecture,’ he once told me. ‘It takes a long time to really feel confident about it. I think I’m beginning to understand it now.’ That was at the start of the 1990s, which was to prove a breakthrough decade for him and his firm.

Not that his buildings of the previous decade, and going right back to his first built work in 1967, appeared to display the remotest lack of confidence. Founding a practice in 1980 (as he did after his early career as one half of Farrell/Grimshaw Partnership) was, seen retrospectively, a tricky moment for a determinedly forward-thinking kind of architect. The 1980s were to be the Retro Decade in the UK, the decade of Thatcherite politics, social unrest, and in architecture the lures of post-modernism and traditionalism.

Grimshaw appeared to float above all that. Beyond the fact that his architecture became less functionalist and more expressive during that decade, the style wars happened elsewhere. Of course this was not a phenomenon confined to him: the architectural movement then known as high tech continued to evolve as an approach very distinct from either those Retro Decade-isms, or for that matter from conventional old-school modernism. But what set Grimshaw apart was his sense of craftsmanship.

This was immediately spotted by the fashion designer Jean Muir. In the late 1980s I was on an architectural awards judging trip of Britain, with Muir as one of the judges. We found ourselves debating the merits of one good building that was leaning strongly towards post-modernism, and another that appeared to be doing the opposite. This second building was Grimshaw’s Financial Times Printworks in Blackwall, east London of 1987‑8, opened by Margaret Thatcher. Just a large factory, really, but a special one, with glazed flanks so you could see the presses of the pink ’un whirring from outside. Muir, however, saw something else. ‘It’s an inlaid jewel box,’ she declared.

What set Grimshaw apart was his sense of craftmanship

This was the best shorthand for what the building was – and is, for it survives as East India Dock House, a grade II* listed server farm. It went way beyond its ostensible function, finding a glory in the structural expression of external steel outriggers to hold and brace the glass walls. Half-close your eyes as you look at it and this section of facade becomes something else: an abstracted neoclassical portico with the outriggers playing the role of columns, appropriately proportioned and scaled. There is a cornice of perforated steel tie-beams. This can all be seen as useful ornament but the way it is deployed indicates an underlying architectural operating system.

This, I contend, was the building where Grimshaw achieved that full understanding of architecture that necessarily takes time and effort to acquire. One can’t push the temple-of-industry analogy too far but it demonstrates one other thing: like all of his earlier buildings, or for that matter a Victorian pumping station, it’s an example of architecture exalting the everyday. ‘I don’t think there should be a distinction between how much trouble you go to for one type of person rather than another,’ he remarked at the time – his version of Lubetkin’s ‘Nothing is too good for ordinary people’.

The Historic England listing description for the FT Printworks succinctly states where some of this was coming from: ‘Grimshaw’s father was an aircraft engineer and his great-grandfather a pioneering civil engineer; these influences are apparent in his architectural oeuvre: his buildings express the characteristics of the British high tech movement of architecture, where engineering, construction and the expression of function shape buildings’ aesthetics and form.’

Grimshaw’s father was an aircraft engineer and his great-grandfather a pioneering civil engineer; these influences are apparent in his architectural oeuvre: his buildings express the characteristics of the British high tech movement of architecture, where engineering, construction and the expression of function shape buildings aesthetics and form

Indeed, this side of things has always been a fascination for Grimshaw. His first built project of 1965-1967 was the now-demolished spiral Service Tower for Student Housing near Paddington in west London. ‘By experimenting at the steelwork factory we found it was possible to feed a strip of steel through rollers at an angle and thus form a helix,’ Grimshaw later recalled. In search of the desired end result, he has always been one to involve and challenge people who make things. A standard solution can be fine; but there are plenty of times when off-the-peg won’t do.

The brief was to convert six big run-down terraced houses into 35 homes for students. There was little in the way of plumbing or sanitation. Grimshaw, fresh out of the AA, designed a mini-Guggenheim of bathrooms, arranged on a spiral ramp in a freestanding steel building plugged into the back of the terrace. The students strolled up and down the ramp to find a free bathroom.

The central steel core of the tower was used as a crane to hoist the prefabricated GRP bathroom pods into place. Designed in 1965, this was pioneering stuff, decades before the arrival of the CAD programmes that such a complex structure looks like it needs. There was Archigram in it of course – Peter Cook had been a tutor. Grimshaw had also learned from Cedric Price and John Winter at the AA, and prior to that had had a thoroughly orthodox architectural grounding at the Edinburgh College of Art. Always fascinated by engineering, he knew how to design practically, not just conceptually.

The Service Tower got a lot of publicity. Bucky Fuller went to visit it. As the late critic Colin Amery (who both on the Financial Times and as a consultant to Sainsbury’s was a significant supporter of the practice) wrote in 1995: ‘Grimshaw shows in this early Paddington scheme that he absorbs and thinks about radical ideas and then, quietly and in his own way, makes innovation practical. He removed any trace of megalomania from the ideas of Archigram and humanized them.’ Archigram’s Cook recently remarked in a public discussion that this little building represented the architectural radicalism of the time rather better than the later Pompidou Centre in Paris which shared many of the same influences but (in the view of the Archigram boys) maybe didn’t quite deliver on its initial kinetic visual promise. More prosaically this was also, as Grimshaw later recalled, his first experience of co‑ordinating 35 specialist sub-contractors.

It set the tone for Grimshaw’s subsequent career, with early projects such as the 125 Park Road apartment tower of 1967-70 (now another listed building) near Regent’s Park. This was an example of lateral thinking. Exploiting new legislation which allowed people to club together to form self-build housing co-operatives, it used the space planning and construction techniques of curtain-wall office blocks, providing a shell and core with uncluttered open spaces in which to construct apartments according to taste. It then wrapped this package up in a sleek radiused-corner skin of corrugated aluminium and horizontal strip-windows. 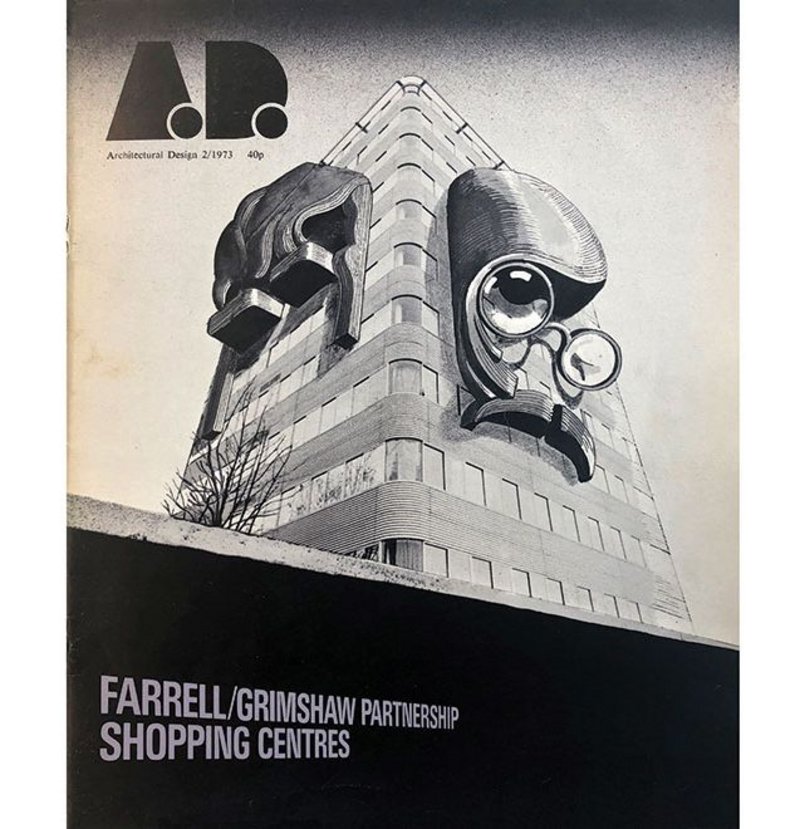 This was a remarkably large and confident building for a young architect and it was personal: the Grimshaw family made one of the apartments their home for six years. From that point on, the story you will read is one of steady development of ideas, materials and techniques interspersed with significant moments: buildings or events which served to swing the Grimshaw enterprise into a new direction.

Having put a succession plan and Employee Benefit Trust in place relatively early, Grimshaw’s spell as president of the Royal Academy from 2004 to 2011 hardly affected the growth of his practice internationally: following early projects in France and Germany, it now has offices around the globe and is especially rooted in the USA and Australia as well as London. Grimshaw shows that to succeed, architecture must provide not just fertile and relevant ideas but also thought-through business planning.

In the end it all comes back to craft and clarity. In a Radio 3 interview we made in April 1992, Grimshaw pondered the Englishness of his architecture. ‘In England there is this tradition amongst a whole group of architects (I don’t necessarily call them modernists; I call them, in some ways, traditionalists who have emerged from the engineering tradition of Paxton and Brunel) who are really interested in the way things go together and in the way they’re detailed. I think that is getting more and more appreciated. People are getting fed up with wallpaper architecture and they want to see real details in the way they’ve appreciated them in the past. It’s ageless in a way… putting things together beautifully and doing things beautifully was as much a part of the arts and crafts movement as it was a part of Victorian engineering.’

Grimshaw in the 1980s: A new kind of functionalism

Grimshaw in the 2000s: Changing the century