From the Hagia Sophia to the Global Viprassana Pagoda in Mumbai, the dome covers a multitude of purposes

The dome – a feat of enclosing as much volume of space as possible under a perfectly centralised, symmetrical structure – has fascinated architects, engineers, patrons and public since the Renaissance. The Pantheon and Hagia Sophia are the almost perfectly preserved ancient prototypes from which two traditions of dome construction, eastern and western, emerged and spread throughout the Islamic and Christian worlds as symbols of the unification of multiplicity in the singularity of shared belief. With their power to astonish undiminished, domes have grown in the modern period, changed material and evolved to host a range of uses that are compatible with their centralising focus, from the old British Library to conference centres, sports halls, stadiums, baths and debating chambers. It has even recently found new life in its purely masonry form with the world’s largest unsupported stone dome having been built over a meditation hall in the Global Vipassana Pagoda near Mumbai (2009). 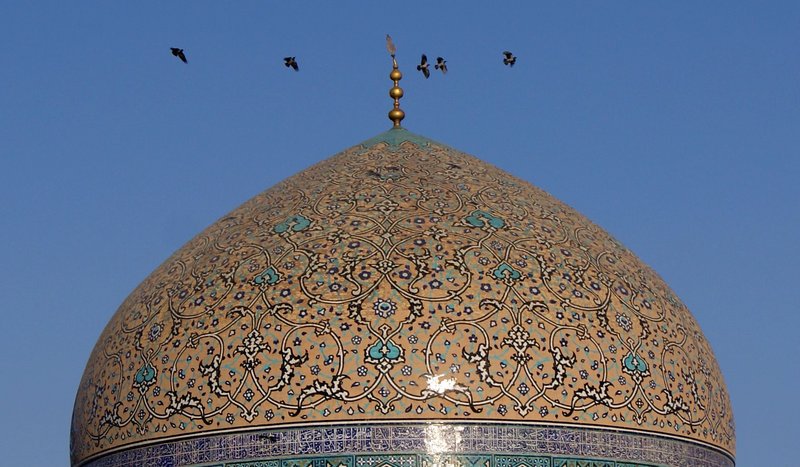 Not large – in fact, only 13m in diameter – Shah Abbas’s private mosque on the monumental Naqsh-e Jahan Square in Isfahan is a paragon of geometric elegance and the celebration of religious themes in purely spatial and abstract form. It is the culmination of a lineage of shrines and mosques in which the purity of platonic forms – the dome sitting on a cube – is given an other-worldly depth, luminance and significance by the application of ceramic tiles covered in complex patterns. This is a form of decoration that manages simultaneously to emphasise the primary forms on which it sits while also dissolving them into pure sensual celebration, in a Magic Eye-like game of simultaneity. 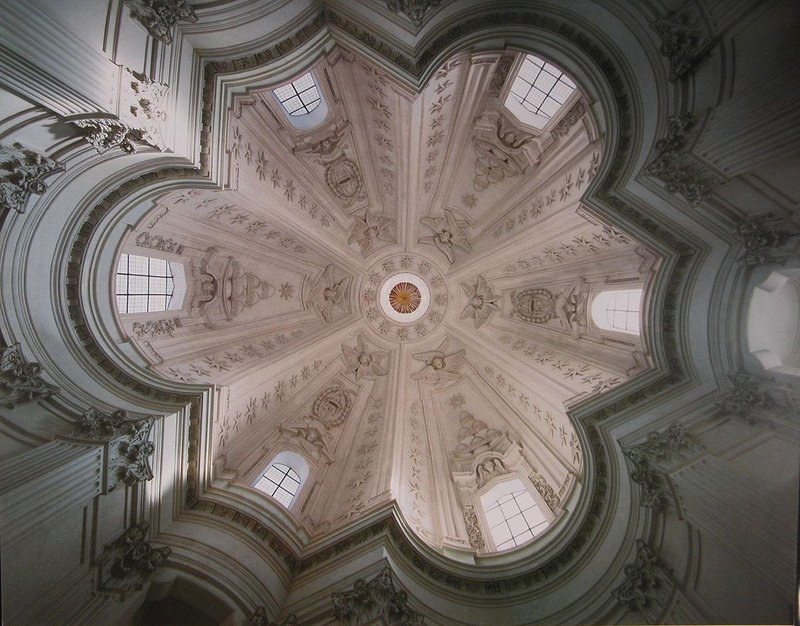 Like the Sheikh Lotfollah Mosque, St Ivo is a small but spectacular building. It embodies a particular and highly sophisticated approach to the design of a centralised church where surface ornament is subordinate to the modulation of form and structure. The very shape of the dome is radically different, springing not from a pure circle, octagon or oval but from a complex, undulating and variously sharp and smooth geometric form, based on interlocking equilateral triangles. The structure is thus symbolic of the union of the Trinity under one God, as the dome transitions from the multi-faceted triangular geometry at its base into a perfect, eternal circle at the oculus. 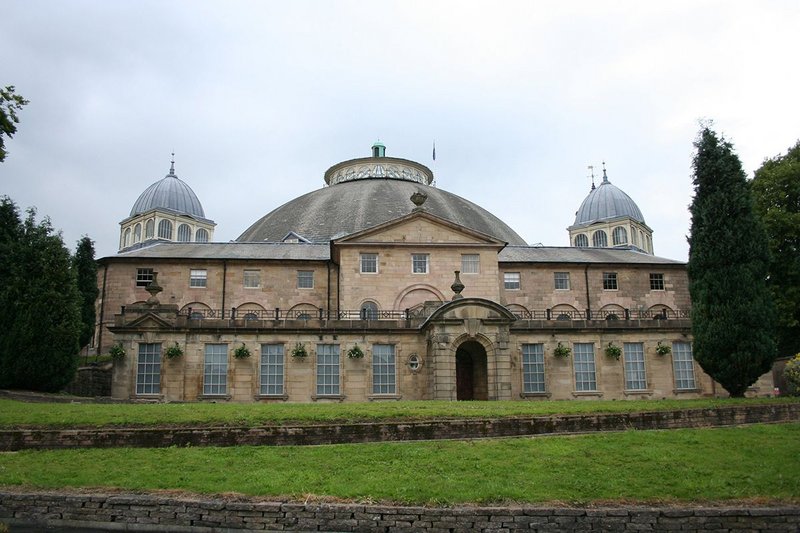 Still the largest unsupported dome in the UK, the Devonshire Dome was added to the stables built by John Carr from 1785, which originally served the Duke of Devonshire’s neighbouring development of the Crescent. The stables were transformed in the 1850s into a 300-bed hospital offering charitable medical provision, with the dome added in the 1880s to provide a covered central circulation space. For a time, it was the largest dome in the world thanks to its pioneering use of steel ribs, although its exterior is traditionally clad with slate in an attempt to harmonize with the earlier parts of the hospital. Looming at a wildly disproportionate scale behind Carr’s Palladian frontage, the hospital complex appears to embody quite eloquently both the difficulties in reconciling past architectural tradition with the scale that came with industrial capability, as well as the thrill of their incompatible juxtaposition. It is now used by the University of Derby. 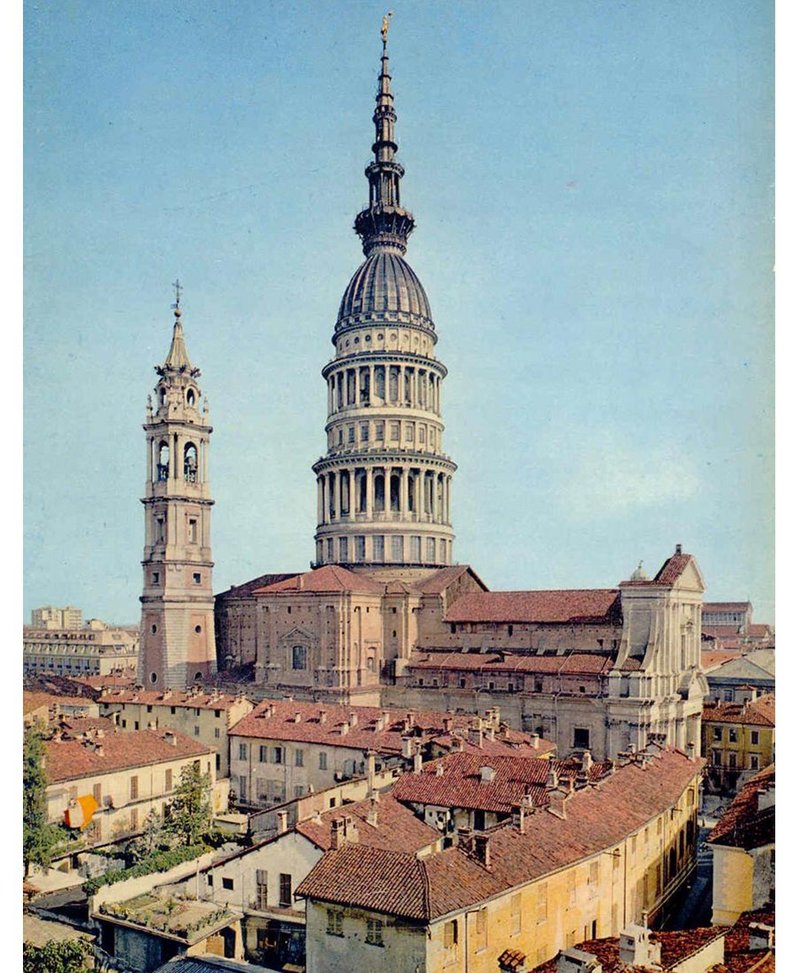 Added to complete an older church, Antonelli’s dome is a singular fusion of the desire to reach inordinately high (121m), the 19th century tendency towards evocative architectural profusion, and a traditional cupola over the crossing of a basilica. His solution strongly recalls Wren’s great three-domed crossing of St Paul’s Cathedral – cone dome and all – though greatly stretched and multi-colonnaded as it stretches for the sky. Dominating the skyline of Novara much as his Mole dominates Turin, the extruded cylinder of the tower/dome has a fairy tale-like appeal in its almost unbelievably exaggerated sense of proportion. 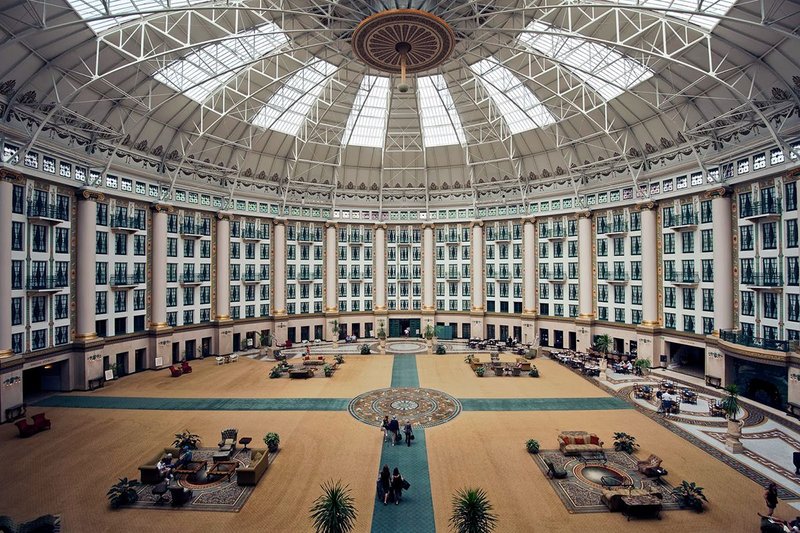 The West Baden Hotel dome is so large that within it, birds were given free rein to fly as they would – and palm trees grew to full height; rooms on the inner ring of the hotel’s circle faced exclusively into the interior world created by the dome’s 61m span. The internal facade is a re-imagining of Bath’s Royal Crescent for a new era of climate-controlled, amenity-rich diversion; its giant order of gilded, four-storey Ionic columns supports an entablature of square windows and mullions, frames rows of bedroom windows, and provides the podium from which the steel dome rises. 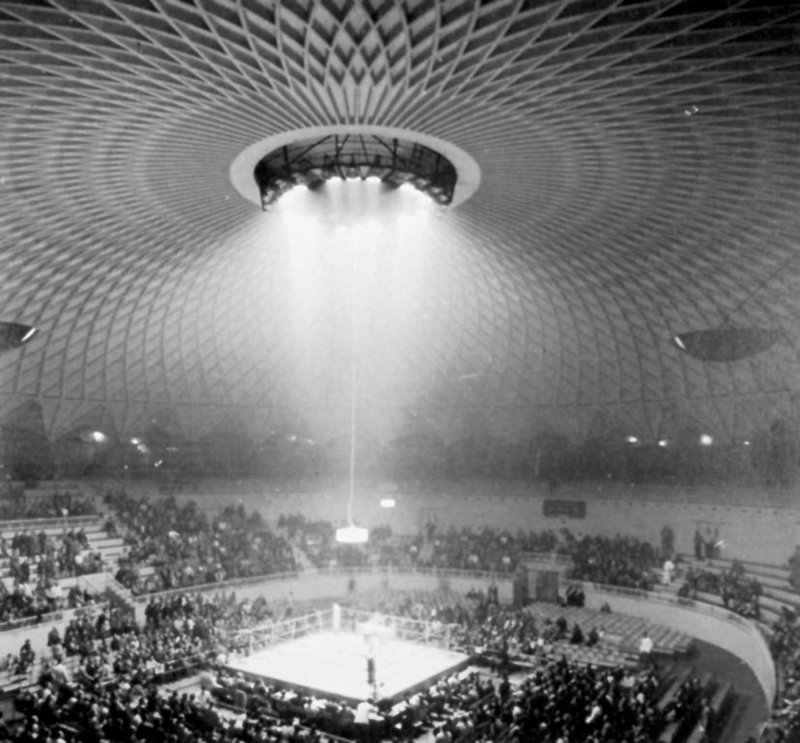 The master of reinforced concrete, Nervi said that ‘the form of steel reinforcement should always be aesthetic and give the impression of being a nervous system that brings to life the lethargic mass of concrete’: his Palazetto is a superb illustration of his approach. The ribs, in an effortless union of the spirit of Islamic geometry and the structural logic of Roman coffering, trace filigree patterns across the span of the dome, intertwining in increasing density as they spiral towards the centre of the space. This network of ribs floats on a ring of concrete buttresses and glazing. The palazzetto heralded an increasingly common use of domes in the covering of sporting venues, which reached its height in scale, if not quality, with the vast Louisiana Superdome (1971-5), famed both as the largest fixed-structure dome in the world as well as having been the shelter of last resort for 9,000 people during Hurricane Katrina in 2005.

In March 1983, President Félix Houphouët-Boigny relocated the country’s capital from Abidjan to the village in which he was born, and aside from the paraphernalia of state, he commissioned a church modelled closely on the Vatican basilica. The dome of St Peter’s, however, would fit neatly inside the dome of his church. In its vast scale, rapid construction, cultural and geographic distance from the model on which it was based, and intentional appropriation of a specific architectural lineage with all of its weighty associations, the basilica highlights how historically associative forms can be – and are – remarkably suited to a globalised world in which clients, institutions and countries may freely choose the histories with which they desire to be affiliated. 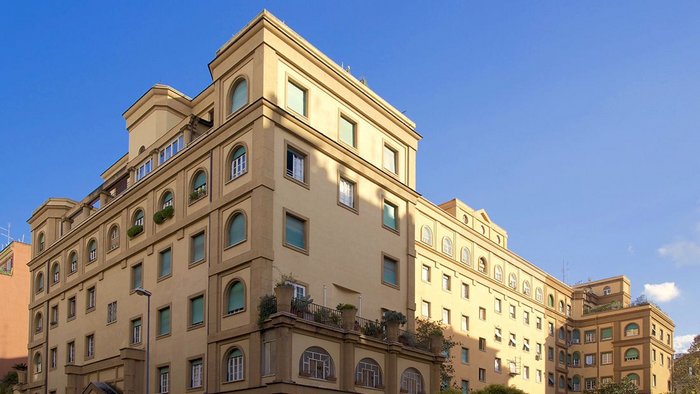