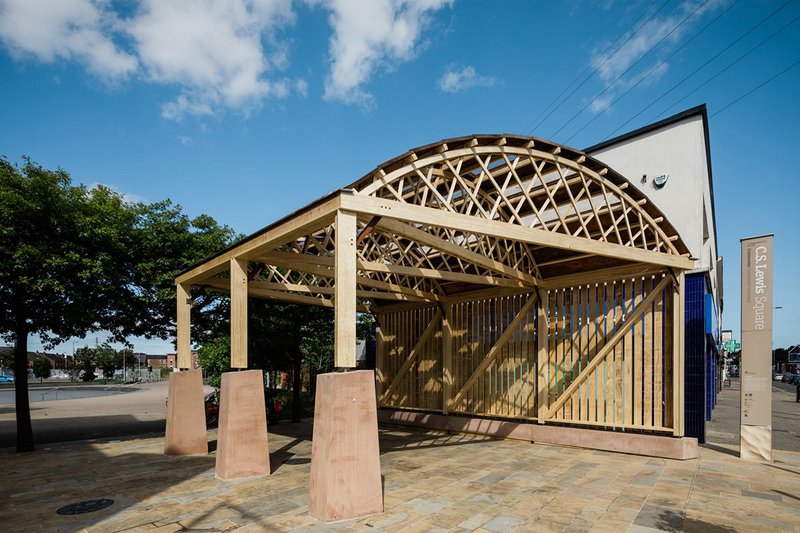 The building of summer pavilions as examples of outré temporary architecture has become a familiar thing, to the extent that in London the Serpentine Gallery’s original international series is in danger of eclipse from younger homegrown pretenders such as the biennial version at Dulwich Picture Gallery or the Architecture Foundation’s east London canalside Antepavilion. But there is original thinking to be found much further afield. An example in Belfast, Built:East, succeeds differently by being unostentatiously rooted in the history of its post-industrial  location.

It was designed by three friends otherwise working in various places – OGU Architects (Rachel O’Grady and Chris Upson) in Belfast with London-based Donald McCrory. It won an early-career competition organised by the Royal Society of Ulster Architects with backing from building materials company JP Corry in 2017. After much to-ing and fro-ing and design development it was finally built this summer, with Maurice Kinkead, chief executive of EastSide Partnership, acting as client. Eastside is an area of regeneration down the Newtonards Road, the centrepiece of which is the recently-established C S Lewis Square (the writer of the Narnia allegories having been born and raised nearby).

The square sits athwart the Connswater Community Greenway, a £40 million new linear park for pedestrians and cyclists following the local rivers. It is anchored by a community centre and café designed by Hall Black Douglas (the practice where Upson works outside of OGU). I take the bus out there from the centre to meet O’Grady in the café; she’s sitting at a table with a view straight across to the pavilion, set against (but not touching) the end of a row of shops.

The pavilion is a freestanding barn-like structure with no foundations (the client didn’t want its expensive existing paving disturbed). Instead it is ballasted with tall concrete boots at the feet of its three timber columns at the front, with the equivalent weight provided by a concrete ground beam running along the back. These are both pinkish, the result of experimenting in using calcined local clay as part of the mix. Similarly, the zig-zag roof trusses and the curving Corten roof with its skylights were made locally.

O’Grady calls it the ‘Belfast Truss Pavilion’ after the hybrid bowspring/lattice timber structural member first developed in the city in the 1860s to create wider column-free spans and familiar to us from early 20th century aircraft hangars and factories, some of them now restored like the Bristol Aerospace Museum.  They were originally made nearby, and a large ropeworks with Belfast Truss roof structure used to stand opposite the pavilion site. Her version – structurally true to the originals – is made of Accoya wood.

Unlike those factories and hangars, the Belfast Truss Pavilion is a small, almost delicate, affair. The appeal of the six trusses in their concertina arrangement is of pattern and texture, and the shadows cast through them by the skylights. The plan is chamfered at one end so as to pick up the people-movement pattern and avoid obstruction. It is this angle that sets up the zigzag truss pattern. At the rear more diagonals appear in the bracing members across the widely-spaced boarding – effectively a screen to the shop behind and to the roof-drainage outlet.

It is perhaps a little less structurally pure than it might be – O’Grady points out the little fillets of minimal steel bracing between columns and trusses that had to be added to stiffen the whole structure– but you’d hardly notice. Much more important is the way that the space is used: given its position on the Greenway pedestrians saunter through it, cyclists equally whizz through, without giving the place much of a glance: its existence there seems natural, taken for granted. It thus becomes a gateway structure but viewed from the side, it reminds you of something else: a medieval market hall, perhaps a quayside fishmarket building.

Things have changed since the early days when, recounts O’Grady, ‘A lot of people referred to it as “the bandstand”. But then it was going to be positioned more in the centre of the space. As the design evolved – it had to be made less climbable, for instance – so did the design team’s determination. ‘We had to get this right so that people would sponsor the next one,’ she says.

O’Grady, Upson and McCory have all previously worked for (different) practices in London where McCrory is now architecture team manager at Tower Hamlets: their joint tally of experience includes architects Wright and Wright, Penoyre and Prasad, Tim Ronalds, Karakusevic Carson, Michaelis Boyd, AHMM, RHWL Arts Team – blue-chip names all.  So for a tiny early-career project the Belfast Truss Pavilion has quite a bit of professional experience in it. All three also teach – O’Grady and Upson at Queen’s University Belfast, McCrory at Central St Martins in London.

This is no exercise in nostalgia – the three point out that it references the past but is all about construction innovation using local firms for the three main prefabricated elements – trusses, roof (surprisingly complex with its skylights) and clay-mix precast concrete.  Each firm had to make something they had not previously attempted. The all-in cost was £64,000, of which £20,000 came in the form of materials provided by sponsor J P Corry.

All this concentrated design, engineering and manufacturing effort is well worth it. The Belfast Truss Pavilion feels comfortably embedded in its locale. It would be good to see it stay there quite a while,