It's all about championing heritage, not owning it, says the conservation body as it teams up with local groups for major preservation in city, alongside its latest Moseley Road Baths project 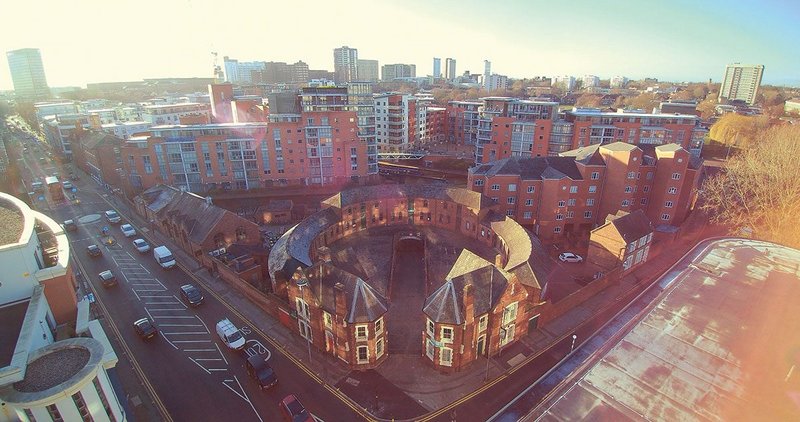 The shape of the Roundhouse probably referred to its primary use for stabling horses. Credit: James Leader

When it comes to heritage, Birmingham is more widely known for demolishing than preserving. We wrote in November 2018 about the neglect of the Aston Webb law courts on Corporation Street, left to go to seed. Then in April 2019 about how St Luke’s Church was knocked down for housing. And that’s just the Edwardian and Victorian stuff. There have been progressive rounds of redevelopment where much of public worth has been lost. The Victorian Society is campaigning to save a historic police station in Summerfield, apparently a necessary victim of road widening. The frequency of these losses would have you think no one is interested or cares.

The grade II*- listed Roundhouse, however, is a brief glimmer of hope. Built as part of Joseph Chamberlain’s Improvement Schemes that aimed to modernise the city to a health and hygiene agenda, it was one of several depots intended to speed up, improve and clean up logistics in Birmingham. Located on the side of the Old Line Canal next to the Arena, it forms a horseshoe shape, with gatehouses either side of the entrance and a tunnel connecting the courtyard and canalside. It was designed by WH Ward in 1874 for the Corporation of Birmingham and is now being restored and transformed into a discovery hub from which to explore the city by foot, bike or boat – an idea dreamt up around 2013 that is surprisingly well suited to the post-Covid era into which it will open.

The scheme is one of two major building works the National Trust has in the city. This one is in partnership with the Canal & River Trust, which bought the Roundhouse 12 years before the project started. The other is Moseley Road Baths, for which the trust is partnering the community organisation that took over it from the council in 2018. Initiated as part of its Urban Places strategic pillar, both projects are aimed at widening the National Trust’s reputation from a preserver of country houses and landscapes to an organisation that supports the built environment and populations of cities as well. A host of architects have been commissioned to work alongside the trust at different phases too. 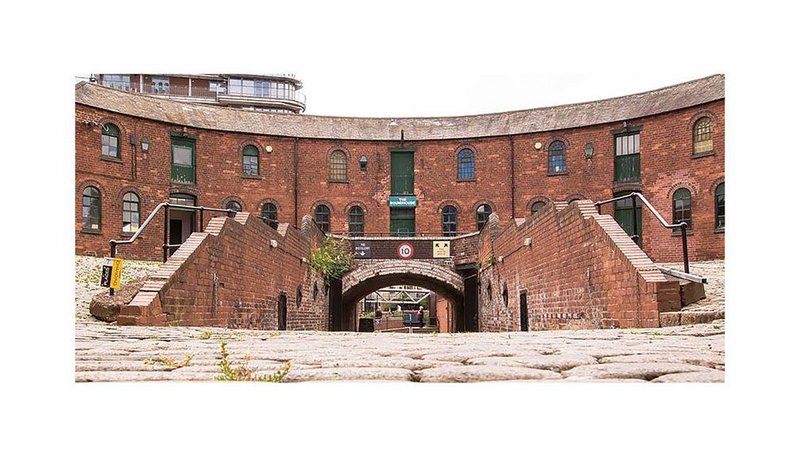 The horseshoe shape was also practical, with a loop system for entry and exit and cobbles for traction. Credit: Jana Eastwood

‘Eighty-three percent of England’s population lives in towns and cities, and it’s rising all the time,’ explains Jo Dimitri, the project manager at the National Trust who has been working on both schemes and is usually based in its small regional office at the Custard Factory, one of four hubs in the Midlands for the consultancy structure that sits behind its properties. ‘The built environment and green spaces in our cities are always under threat from development and increasingly from lack of funding, yet they are important to the lives and identities of the people who use them.

‘Our core purpose is to champion heritage,’ Dimitri continues, ‘not necessarily focus on ownership. How to deliver that and be relevant to what people need in cities is slightly different.’ The organisation owns the Clent Hills on the outskirts of the city and it opened the Back-to-Backs in 2004, but its work is also is about creative programmes with different groups like the Green Academies project, which began in Birmingham and enables young volunteers to look after green spaces where they live.

The Roundhouse project came about through a chance encounter between the organisations now involved in its revival. The building had been part of the Canal & River Trust’s commercial portfolio but was largely empty. You couldn’t walk through, and it was mostly obscured from public view by its tall blank walls, which probably helped it to survive substantially intact into the 21st century once the horses that once were central to its purpose were no longer needed.

‘In urban spaces, the complexity of projects means we can’t deliver them on our own,’ says Dimitri. ‘Instead, we have been developing collaborative approaches with custo­dians and an external partnership scheme to bring in the right skills on revenue/funding models, developers and community operators.’

At the Roundhouse, the National Trust helped explore options to make the building self-sustaining. It brought in external stakeholders, including commercial advice, on what was special and how to use the building to celebrate the diversity of the city and its heritage. At the time the council had announced a cycle revolution, and the Canal & River Trust had done a lot of improvement works to its towpaths for bikes.

Our core purpose is to champion heritage, not focus on ownership

But the business model is different. Capital investment from the parent organisations is getting it off the ground then 80% of floorspace will be let to organisations that help deliver the visitor offer. There will be exhibition space, pre-bookable tours, bike hire, kayaking, paddle-boarding, a café and offices. The building and its sloping circular courtyard will be free to enter, but much of the activities and tours will be organised as separate company and charity. Tours will encourage people to explore nearby places like Ladywood and the Coffin Works, and it is aiming for 30,000-50,000 visitors a year.

‘We now see a lot of public-private ways of working but this a first for two big charities,’ Dimitri explains.

The conversion design was drawn up by Cowper Griffith Architects, who arrived on the project from a competitive tender early on. The building had been in arrested decline yet was structurally good and externally largely unchanged. Inside, however, unsympathetic conversion meant the ability to make out the original stables was gone.

Cowper Griffith’s design aims to restore the original fabric, removing non-original interventions, and improve its structural performance by adding six new steel portal frames. The one-depth brick walls and slate roof are being insulated from the inside. Two new contemporary oriel window openings create visual connections from the reception and exhibition space to the canal. The central section of the building is a two-storey element housing the reception, exhibition area and a multi-purpose ground space. In the single-storey parts either side are the café, retail units and cycle hire spaces. The first floor and gatehouses will be let as offices to like-minded enterprises. At canal level there will be a meeting point for booked activities on the water or by bike. The project is designed to be flexible and adaptable as part of its commercial futureproofing.

However, as so often happens, because of the project’s high receipts of public funding from the HLF and Historic England, it had to be retendered through OJEU at RIBA Stage 4. It got eight responses to a very precise brief that called for a conservation architect with technical expertise and experience of working with many stakeholders, and of working under a National Engineering Contract. Cowper Griffith did submit, but lost out to Burrell Foley Fischer, which is now seeing the project through to completion.

‘We were very impressed at the response of Burrell Foley Fischer, and surprised the team could come to the project with fresh eyes. But it was obviously disappointing for Cowper Griffith,’ says Dimitri. Yet the original design remains intact. Before Covid-19 struck, the team had hoped to open for the summer season but social distancing slowed down construction and the main works are now due to finish this month.

Dimitri, however, is taking the lessons of the Roundhouse to Moseley Road Baths, which is also grade II*-listed. There, the National Trust became part of the coalition of partners around the community operator by asking to be involved. It had recognised a building in desperate need on World Monument Fund’s watchlist, that is also incredibly ‘complete’ with 46 private slipper baths, the last steam-heated drying rooms in the UK and two architecturally impressive pools. The partnership has already restored the gala pool roof with Donald Insall Associates and now is looking at long-term business options in consultation with the community. Tim Ronalds Architects, whose Ironmonger Row Baths was already an example for the Roundhouse, has carried out a feasibility study to test financial viability and a masterplan is currently with the Heritage Lottery Fund. The plan is to keep one of the pools open and create a venue for weddings, fitness studios, a gym and safe spaces for women in response to the cultural values of the community that lives around it.

‘Our work in Birmingham is more about collaboration and public benefit,’ adds Dimitri. ‘There’s much more recognition now about the catalytic impact heritage projects can have, and a shift in focus on it being part of the economy, that they can bring financial value.’ The sooner that happens the better.