Working across international timelines in BIM can be problematic. But the technology and globalisation needn’t be incompatible, as one company has found out

Few in the architectural profession would claim to lead a nine-to-five existence – nor would we want to. But managing an 86,000m2 project in BIM as part of a delivery team that spans 14 time zones is pushing the working day to the limits.

Working collaboratively with colleagues in 12 different offices around the world is just one of the hurdles we’ve had to overcome on a current Stantec project to build a major hospital in the Middle East. If you think working collaboratively in Revit can be complicated, try adding in colleagues who are both several hours behind and several hours ahead of you: the ways in which model typology, task assignments, documentation and workflows are managed all have to adapt, along with the approach of every individual in the team.

But why have a project team that’s scattered across the world? As an international firm, we select the right individuals for each job, combining our pool of specialist expertise and experience regardless of where it might be based. Moreover, on a project of this size, diverse experience and a large team are vital.

On this scheme we typically have anywhere between five and 10 users working on any of the models (and there are over 40 of them) at any one time. We use worksets and Revit Server so that several people can access the same model at once without being in the same place, which allows individuals in the team to progress their allocated tasks around the clock. It’s not without its pitfalls, however: whether for peace of mind or in the spirit of collaboration, many in the team want to share what they’ve done with others on a task by task basis by synchronising with central (SWC) as often as possible. This could be problematic if there are several users attempting to SWC at the same time – they could experience errors that prevent them from saving their work, have linked models unloaded from their local sessions or be held up by long wait times.

There is a solution

So how have we overcome these hazards? By creating SWC schedules for each model, which are clearly communicated across the team, providing them with an appointed SWC slot every hour alongside the ability to save locally as often as they like. In this way we can protect the integrity of the central file on Revit Server, while allowing data from each local session to be received and propagated back to each office before another user attempts to save.  The end result reduces risk of lost work and errors.

Collaborative working across so many time zones and locations also requires a high level of cultural change and co-operation.  At peak times such as the start of the day, lunch times and close of play, colleagues have to understand that it’s not possible for everyone to open, save or close a file at once.  After all, there’s nothing worse than hanging around waiting for a SWC to finish, only to discover that someone has rearranged the walls in an area where you’ve just placed some furniture.

As already mentioned, the sheer amount of models required also presents issues. While the model geometry and drawing sheets can be hosted in a single model for a smaller project, the size of our particular scheme has made it impractical and technologically impossible to maintain a single model.  To simplify the model typology, we created three categories: ‘Source Models’ for placing geometry (mainly doors, walls and ceilings) and rooms; ‘FFE Models’ for furniture, fittings and equipment and ‘Sheet Models’ to host the drawing sheets.  This has successfully enabled us to keep model sizes down while pairing distinct tasks to individual models or groups of models.

This model management system has alleviated some of the team issues identified above. For example, a user that wants to place chairs in a waiting room can do so without affecting any work that a colleague may be doing on the other side of the world to reposition the walls or doors. Meanwhile, a third colleague can work in the sheet model without even having to load any of the linked model worksets, speeding up the process. And, of course, the more we use segregated model types, the number of users that need to access each model is reduced, simplifying the process of opening, closing and saving files.

Every project involves a learning curve and, even for a practice like Stantec with considerable experience of delivering schemes in BIM across an international project team, large scale design tasks such as the Middle Eastern hospital involve very specific challenges. The reason the project team is working across so many locations and time zones is that we followed our own three-step model for international BIM projects. This is: first, to identify factors that need to be considered during the project proposal phase as part of assembling a successful team; secondly to understand how the split scope between consultants, their location and required project deliverables should inform the model typology and documentation strategy; and thirdly to implement workflows that decrease the risk of low productivity due to multiple models, large teams and limited live communication across time zones 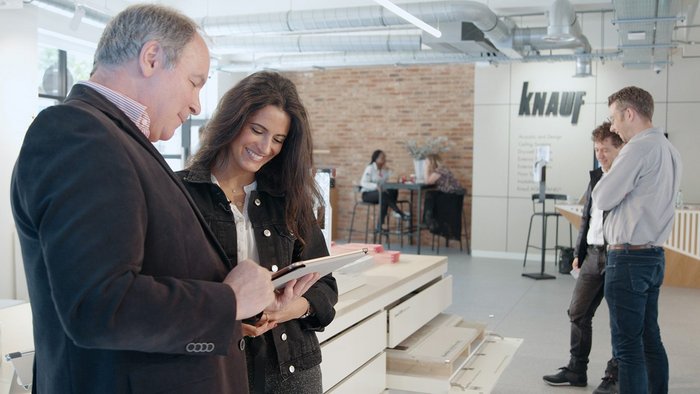 In association with Knauf

The easy way to specify walls, ceilings and floors