Shortages in skills and materials thanks to Brexit and the pandemic have been exacerbated by the widespread retirement of the ‘Loadsamoney’ generation who entered the building trade in the 1980s. Can a new generation be trained to make up the shortfall? 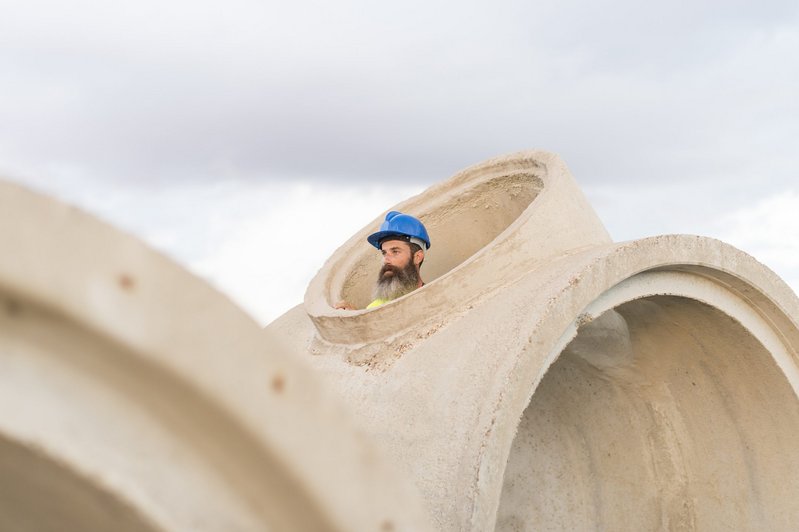 Talk to construction industry forecasters and they will likely tell you how the whole forecasting process has become topsy-turvy in the wake of the pandemic. But one thing is becoming increasing clear – UK construction is on the brink of a major skills crisis.

Normally, the focus of forecasters falls heavily on the demand side. Supply side constraints such as skills gaps, or shortages and spikes in the price of materials, are also considered, but tend to take a back seat. Normally, the debate is about the demand in the various markets with occasional references to constraints which might shade the forecast.

Today this normality has been flipped. With multiple links in the various supply chains stretched or broken, attention has shifted dramatically to supply-side issues. From brick, timber, steel and cement shortages to delays in critical products, materials supply has become the big talking point in boardrooms and forecasting panels.

The latest ONS Business Insights and Conditions Survey data (Wave 42) suggests that 10% of construction firms have been unable to get all the materials they need. This is down from the near 20% in the summer. But a further quarter have only been able to source all their materials they need through changing supplier. The data also shows that most of those unable to source materials within the UK have suffered some disruption, although just a small proportion of firms have suffered ‘severe disruption’.

These challenges have led not only to concerns over whether materials shortages might delay current or future projects, but also to fears that inflation in materials prices created by shortages will topple the viability of projects in the pipeline. Materials account for about 40% of construction work and prices, according to the industry department BEIS, have risen by more than 20% in the 12 months to September. In truth, it is hard to predict the likely damage as there is little by way of precedent.

But while the focus of industry leaders is understandably material supply chain issues, given the immediacy and scale, less attention is being paid to the growing crisis in labour supply. This poses an even more profound threat.

Even after the shortages and rising costs of materials have eased, over the next 12 months or so, the problem of labour shortages looks set to linger and grow. This comes at a time when the industry is looking to crank up activity to meet the huge tasks of revamping the built environment to meet net-zero targets and to ‘level up’. Much of this will be retrofitting and repurposing, which tends to be much more labour intensive than new-build work.

Data assembled recently in collaboration with the Construction Products Association to examine the issue in more detail suggest any hope of a quick fix is optimistic. The problem is long-standing and deep-rooted, as discussed in RIBA Journal in June.

The labour force data has for many years revealed an impending age crisis within the construction workforce, with a high wave of the workforce heading towards retirement in the 2020s. This bulge in the workforce in their late 40s and 50s represents the surge in numbers joining the industry in the ‘Loadsamoney’ late 1980s. In more recent years recruitment of UK-born workers into construction has been relatively low and to fill the gaps firms have looked to workers from abroad.

The share of non-UK born workers in the construction sector had grown to around 14% when the pandemic struck. The largest share was from the EU. These non-UK born workers tended to be younger, with the bulge of older workers closing on retirement tending to be born in the UK. It was clear the industry faced real questions over how recruitment with growing numbers of retirees and constraints on recruiting from the EU.

The extent of the challenge facing the construction sector over its workforce will not be clear in the data until the effects of furlough fully unwind. But with each data release comes growing concern that the day of reckoning for the industry’s workforce has been brought forward. Second quarter 2021 ONS Labour Force Survey data for construction paints a picture of deep scarring, caused not just by the pandemic, but by Brexit.

It’s important to note that the construction sector data covers those working for contractors, building firms and their subcontractors labour statistics. Professionals, materials suppliers, plant hire firms, and a host of other related business are classified elsewhere. Also, the official labour force figures are for various reasons far from perfect, especially now with the pandemic disrupting both collection and interpretation of the survey data.

But the scale of change is unmistakeable. They point to a 10% fall, roughly 240,000, in those employed within construction between the second quarters of 2019 and 2021. And the impact of Brexit appears to shine through in the numbers.

A disproportionate loss came from those born in the EU. They are estimated to have accounted for 8% of the construction workforce in June 2019, but 23% of the fall, with a loss of 55,500. The blow appears to have been softened by significant compensation in the numbers from an increase of about 40,000 in those born in other nations outside the UK.

Perhaps more worrying is the drop in the number of UK-born working in the sector. 223,000 were lost, half of which were aged 50 or older. Given that there tends to be a big drop-out rate among those older than 50, it is unlikely that significant numbers will return as the effects of the pandemic fade. 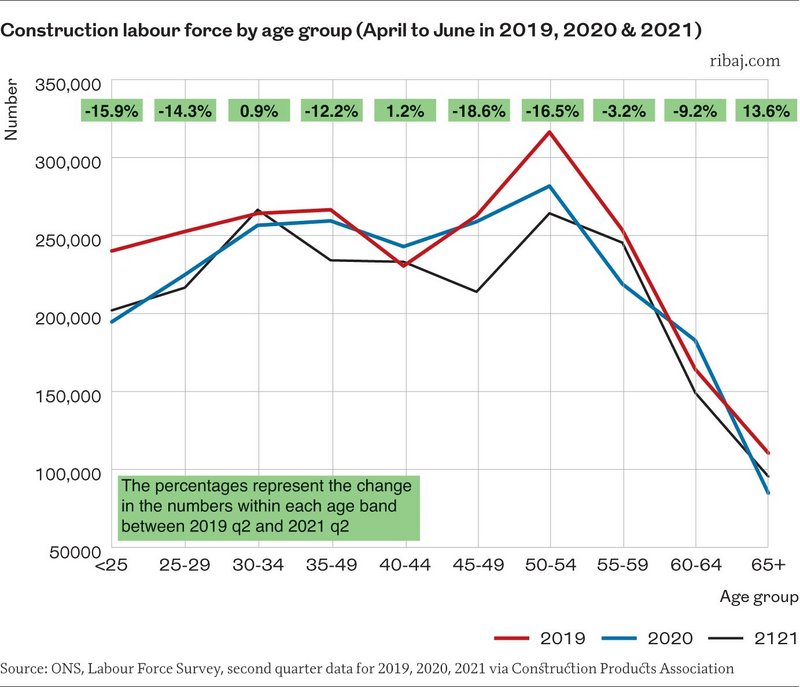 Chart 1 illustrates how this has impacted on the age profile of the industry. has been flattened by the travails of the past 18 months. The loss of this cohort of workers has been a concern for many years, but its decline appears to have been accelerated making the challenge it posed far more immediate. 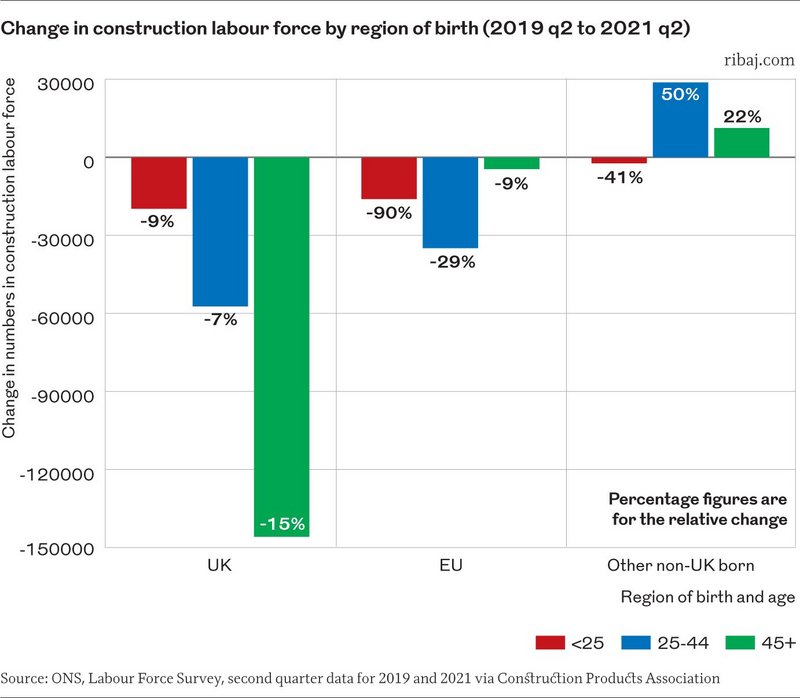 Chart 2 paints a more detailed picture with the data looking at broad age bands and region of birth. It shows in pure numbers there has been a major loss from the cohort of UK-born workers older than 45. But in percentage terms there has been a big drop in EU workforce in the 25-44 age group that will represent much of the younger and more skilled workforce. As we see, some of this has been balanced out by a rise in those not born in either the UK or EU.

This points to a double blow to the construction labour supply – a big drop in younger skilled workers from the EU and a faster than expected loss of older and presumably more experienced workers born in the UK. Consistent across all groups has been a reduction of new blood into the sector, with falls across the board in those younger than 25. 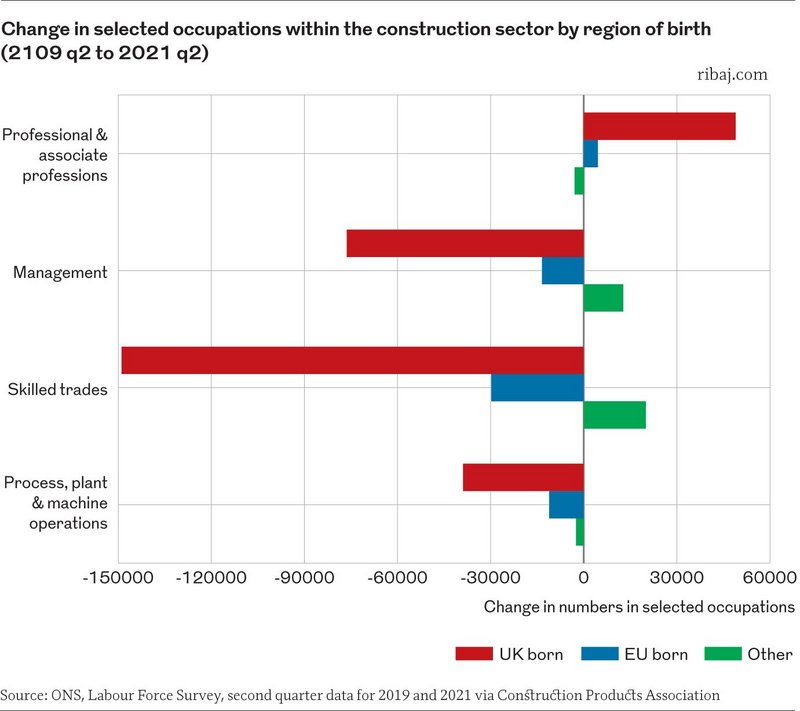 One perhaps unexpectedly positive twist within the figures is the increase in the number of professionals and associated professionals working within the construction sector, as Chart 3 illustrates. Comparing June 2019 with June 2021 the figures suggest a rise of about 12%. This does not appear to have come at the expense of those working within engineering or architectural practices, where the numbers of professionals and associate professionals in June 2019 and June 2021 appear broadly equivalent, despite the apparent significant fall in numbers born in the EU.

The drop in the numbers of the workforce in management jobs should be viewed in the context of the multiple micro-companies within the construction sector, many in effect work as self-employed subcontractors. So, the fall should be seen alongside the fall in skilled trades. What is clear is that huge numbers have been lost. Proportionately, the losses within both management and the skills trade are highest among the EU-born cohort.

Across management, skilled trades, plant operatives and elementary occupations, which make up most of the on-site skills, the drop in the EU-born workforce was almost 40%. The halving of EU workers in those categorised in the ‘Process, Plant & Machine Operatives’ occupational category is particularly worrying.

Regionally, the pain appears to be most heavily weighted towards Scotland. How much this reflects workloads within the country and how much reflects restrictions on movement around the country is hard to assess. The figures represent where the workforce lives, not where it works. The is significant movement of workers across regional boundaries from where they live to where they work.

An important consideration when looking at the loss of EU workers within construction is the very high numbers in London. About 30% of the construction workforce living there in 2019 were born in the EU with almost 20% more also born outside the UK. The figures show a 40,000 fall in EU-born and other European-born construction workers in the capital between June 2019 and 2021. But by way of partial compensation there was a rise of more than 17,000 non-UK-born from elsewhere. The UK-born workforce dropped by less than 4,000. 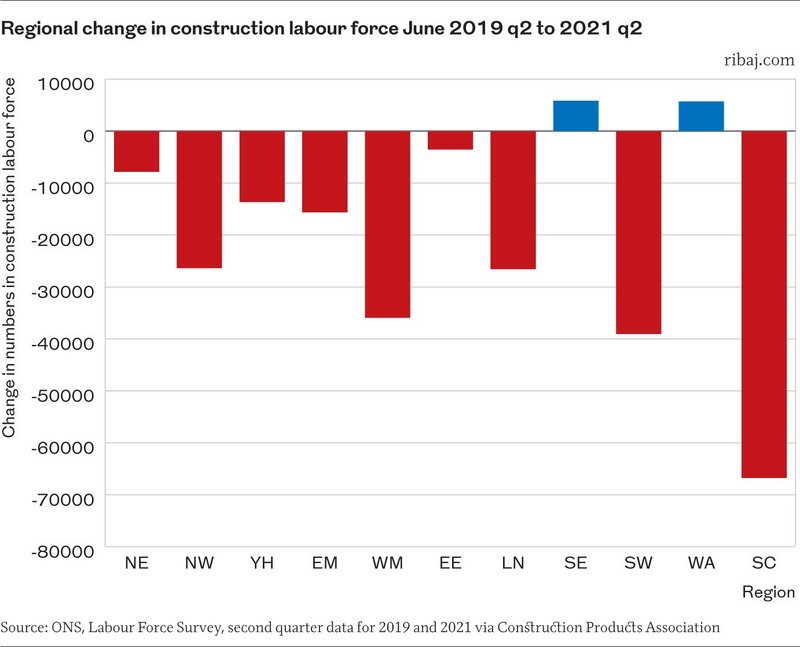 The picture is one of a massive reshaping of the construction workforce, with worrying consequences. It is important to recognise that much of the work ahead will centre on reinvigorating and retrofitting the existing stock to make it fit to meet zero-carbon targets. This work tends to be far more labour-intensive than new build. So, without unprecedented increases in productivity the construction labour force may need to expand beyond it 2019 size.

Making up the 250,000 gap and adding more represents a phenomenal challenge. Historically, the UK has looked abroad to fill the gaps in its construction workforce, such as in the post-war era when a huge cohort of Irish workers fuelled growth in construction. More recently EU have workers made up for deficits in training and recruitment the UK-born workforce.

That supply has been, at least appears to have been, blocked with most construction trades not on the government’s Shortage Occupation List. The vast majority of workers are employed by very small firms, who may be unwilling or able to invest in training and who are less likely to be able to sponsor overseas workers eligible to work in the UK. Industry estimates put the cost of sponsorship at £10,000.

This suggests that, from the figures we see and those that we should expect to see, the gap in the workforce will widen rapidly unless the industry can attract UK-born youngsters. Decades of failure suggest that may prove a vain struggle, unless it is underpinned by major changes to wages, conditions, or opportunities for advancement.

The policy moves needed to address this growing crisis may seem distant from those working at the sharp end. This points to constraints on the workflow across the whole construction sector, particularly where projects are labour intensive. The flip side is that there may well be a greater demand for architects who can create designs that minimise the labour content, especially where specialist skills are needed that are hard to source.