Sumayya Vally’s Serpentine Pavilion, which opens today, investigates migration and the creation of places of belonging. She spoke to Dingle Price about communities and cultures, and the building’s legacy for London 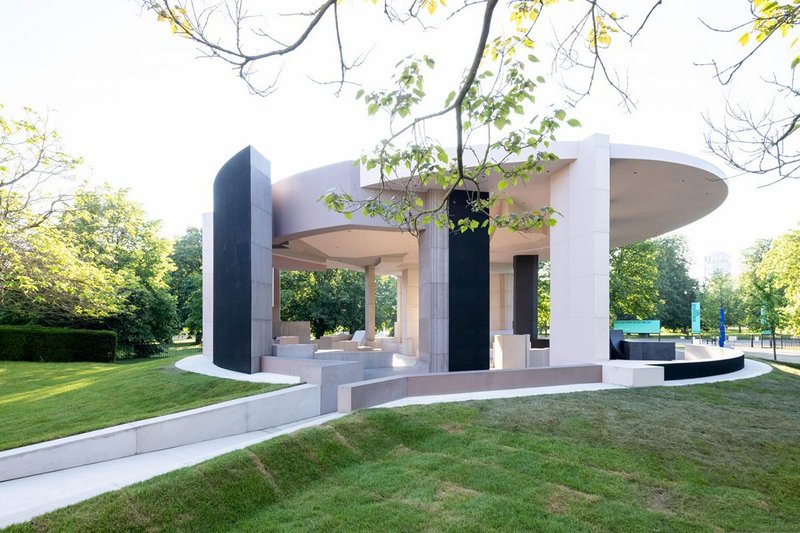 The 20th annual Serpentine Gallery Pavilion, designed by Sumayya Vally of South African practice Counterspace, explores themes of migration, translation and communion. She talked about the process and the programme with Dingle Price, whose practice Price Gore collaborated with artist Yinka Ilori to make the Colour Palace pavilion in Dulwich for the 2019 London Festival of Architecture.

Dingle Price: You mostly work in Johannesburg, and have a deep connection to it through both personal experience and the intense research of your practice. Did you have to change your way of working for a project on a different continent?

Sumayya Vally: My practice has been rooted in Johannesburg, and much of our research has been about finding ways to express tensions around history and territory. So much of the way that Jo’burg functions is rogue or ‘otherwise’, because it has to happen in spite of the architecture that the city has inherited. Jo’burg has given me a way to read place that is about digging underneath what we take for granted as architecture. I approached London in that way, too, wanting to read something under its surface, and also to reflect London to London.

There are also resonances between places. I am from a city that functions in a particular way because it was planned to be segregated. But in many cities certain groups have more access to opportunity, or to the centre as it were, and others who move there for work and have to find ways to construct belonging. People come to Johannesburg from the rest of the continent and beyond, and London is also synonymous with migration: everyone from London is also from somewhere else.

DP: How did you begin to research London?

SV: When we were asked to make a submission, I became interested in histories of migration, and started to look at places that had particular relevance to it. In the Bishopsgate Library archives I found posters for events taking place in particular neighbourhoods – the Four Aces club in Dalston, for example, which was one of the first places to play black music. I was also interested in everyday spaces of belonging and resistance – churches, shops or hair salons – spaces that sustain communities and cultural traditions. I became interested in how those spaces came to function as places where people could gather in forms that were resonant with their cultures, their rituals and their identities.

The form of the pavilion is an abstraction and amalgamation of lots of different gathering spaces, and lots of architectural gestures around gathering – for example the way young people in Brixton met on porch steps, which became significant places for organising. It creates a continuous gathering structure with lots of little places set at different heights where people can meet and converse. Some engender people sitting across from each other in a one-to-one conversation, while others are about holding larger groups.

DP: Did the pavilion evolve in a precise way from surveys or drawings of those places, or is it less literal than that?

SV: I did have drawings to work off, but it was not a literal recreation. I also worked a lot with photos and was interested in how spaces like the Mangrove restaurant in Notting Hill became important cultural institutions because they were able to create atmospheres that allowed people to feel safe enough to organise and to be creative.

Importantly, the pavilion is conceptually made up of five parts. As well as the structure at Kensington Gardens, there are four additional structures located around the city, at the Tabernacle cultural venue in Notting Hill, at New Beacon bookshop at the George Padmore Institute in Finsbury Park, at the Albany arts centre in Deptford, and at Valence Library in Barking & Dagenham. They are seeds for collaboration between the Serpentine and those other locations.

We can also think about architecture beyond the realms of the built. The pavilion programme includes publishing and the structure at Valence Library houses a radio station – another very important form of public space and a forum for discussion – which launches in September.

I’ve also worked with the Serpentine’s civic and education team and artists from different neighbourhoods on sound commissions that will be played in the pavilion. The intention is to bring in some of the people from across London who inspired the pavilion in a very human and direct way, which is through the voice. It has been important to me that those initiatives are part of the architectural project, not just an afterthought to a building.

I think some of the same ideas – about migration and entanglements between different places and cultures – are also present in the pavilion that your practice did with Yinka Illori, which I found very moving. 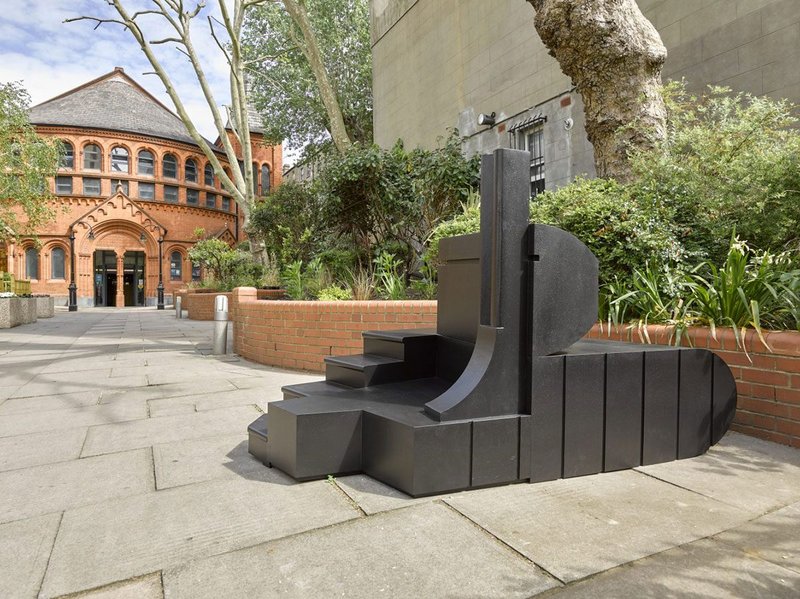 A fragment of the Counterspace Pavilion at the Tabernacle in Notting Hill. Credit: George Darrell

DP: When we did that project our practice was based on Peckham's Rye Lane, which is the centre of a large community of West African origin. We saw that this community expressed itself in all sorts of ways – through their shops selling particular fabrics and foods, and through churches, hair salons and music. But there was little expression of it in the architecture – only to the extent of signage. Recent buildings still drew on conventional British architectural history. So there was an idea of manifesting this rich culture in some architectural form, which became possible through the collaboration with Yinka.

You’ve explained that your pavilion exists beyond the physical structure in Kensington Gardens, but what do you think is the role or potential of this type of commission – a temporary summer pavilion that is visited by large numbers of people, and also disseminated globally by magazines and social media?

SV: For me pavilions are places to put ideas into the world and platforms for the expression of imagination. I also come from a practice context in which politics is largely seen as separate from the realm of imagination, and where there are so many pressing needs, that some might see pavilions as frivolous. I think that the deeper social project of working in the imagination is really important, and to some degree all of our challenges in housing or service delivery need more imaginative solutions that allow us to express the identity of places.

I hope that people will enjoy the form of this building – as an architect it’s been an honour to build something at this scale and on this platform – but also hope some of the research around the project becomes known, and the pavilion becomes an opportunity to reflect on the stories that brought it into being. 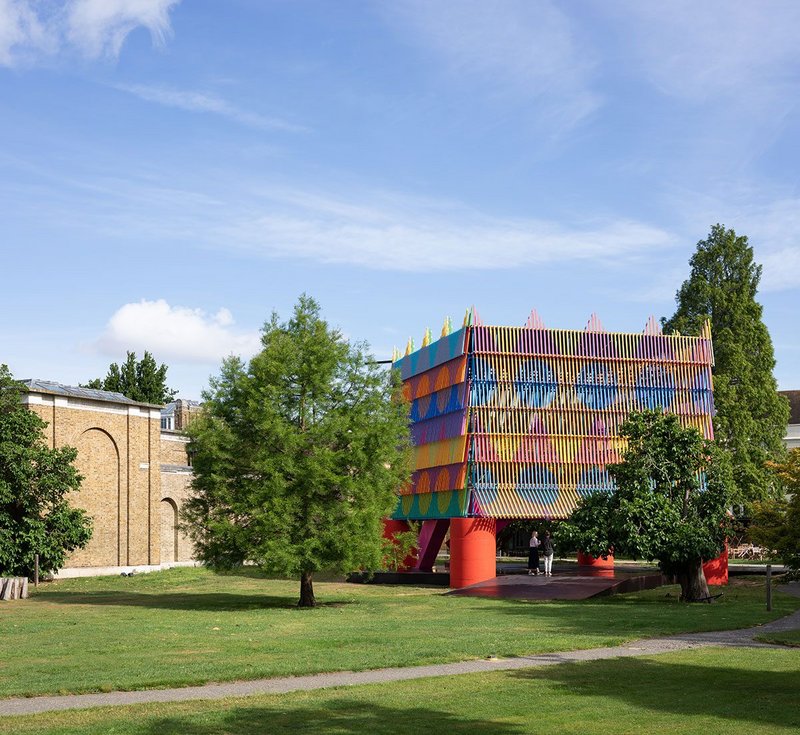 DP: On a physical level the pavilion is about some memory of places that have fostered important conversations, and it is a place for new discussions, and you’ve also used the project to start conversations that are way beyond the physical structure – both in space and time. Could you have achieved some of your goals without the building, and do you see the pavilion as a piece of a wider project, rather than the culmination of it?

SV: The pavilion is a piece in a bigger story, and maybe a lot of that could have been achieved without the built form, but I believe in architecture as a collective act and I think it is only through being able to make the pavilion that so many of these collaborations and engagements have come about. I’m not just saying that in a cheesy way: I’m thinking about being able to negotiate how different teams at the Serpentine work, and being able to bring people from different disciplines together through this project. We convene in buildings, but we are also convened by building.

DP: Have the other aspects of the project been made more possible or more important by the year’s delay imposed by Covid? The pandemic and other events of the last year such as the Black Lives Matter protests around the world make some of the things you are talking about seem much more urgent now.

SV: Absolutely. I think that the pavilion was timely in that sense. The design and intent was there before Covid, and before the rupture that we had around BLM, but I definitely hope that those experiences will make us listen more deeply to some of what the pavilion is trying to say.

From the time that we knew that the pavilion was not going to be built last summer, I started to think of the project as extended and not delayed, which was also something encouraged by the Serpentine curator Hans Ulrich Obrist and trustee David Adjaye. We used the year to think about some of the other aspects of the project, which were helped by the time they had to brew.

For example, I was aware that many of the community spaces I was interested in rely on the generosity of organisers, and proposed an initiative called Support Structures for Support Structures, which is a fellowship that supports artists working at the intersection of art and social justice who might not fit into the neat formulae required by most grant applications. The Serpentine has taken on the project and is supporting up to 10 artists annually for at least three years.

The pavilion commission is usually very high-paced which is exhilarating; for me, the actual build has been breathless, but the extra time to spend on the other aspects has also been a gift, and allowed the creation of collaborations between institutions and other things that should outlast the building.