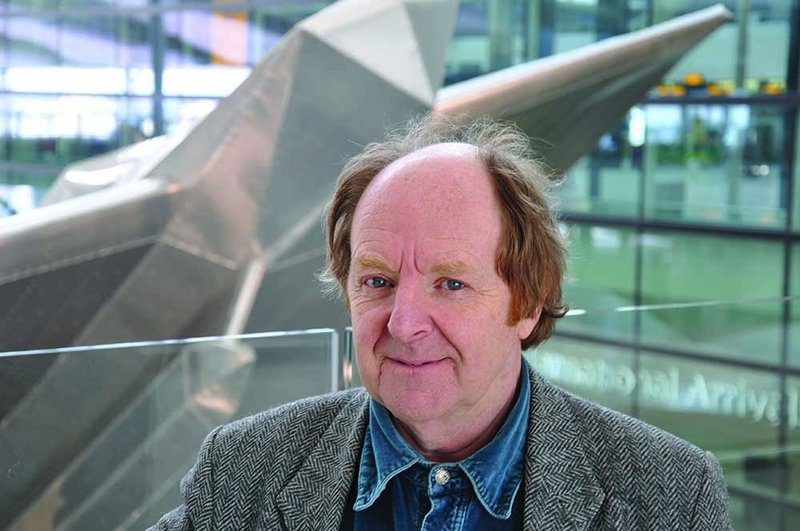 What does ‘Slipstream’ represent?

I’ve taken the Edge 540, a stunt plane used in air races, put it in a computer, and allowed it to make manoeuvres and tumbles to give myself shapes and forms and undulations. It starts with a completely abstract situation, and as it halts over the bridge, it turns into a realistic sense of what has generated the form. It talks about velocity and journeying. It has a history in Futurism. And for many, this will be the gateway to the cultural capital of the world.

What were the constraints?

They were the restrictions of the canvas – the void of the space. We had to position the work off the columns. It wasn’t to touch the floor, or conceal wayfinding, etc. This is not a gallery, the rules are very different.

Who did you collaborate with?

I brought what I call the ‘dirty hands brigade’ with me, as opposed to the art world. People who could prove it could be done. I worked with engineers Tim Lucas and Ralph Parker of Price and Myers, and fabricator Commercial Systems International from Hull. I dealt with the aesthetics and meaning. Between us we covered every aspect.

Passengers will experience this work from all angles, including above. Is that unique?

We had to consider it from this side, that side, above, below – it’s difficult to do, especially working with 3D forms on a flat screen, which I did with Price & Myers. This space is the equivalent of Tate Modern’s turbine hall – it’s the turbine hall of West London. It’s nice to have another space like that, and a privilege to have been able to work on this scale. I’ve spent a lifetime playing with architecture, it’s the scale that I’ve adopted. Those spaces that can be quite huge.

So how is it constructed?

There’s a substructure, spanning the 18m distances between the columns and carrying the tonnage.  It’s bridge-building.  Overall the piece weighs 77 tonnes. A lot of the substructure just supports its length on four rings which work off those columns, holding the steels that run between them. The other structure – which Ralph Parker was much involved with – was dealing with the kind of shapes we had to cut from the aluminium to get that skin to undulate and form itself. You can’t just cut squares and tile it as if it was a roof. We had to follow aeroplane-building procedure. The lines of rivets describe the flows. Thousands of different moments make up the complete skin. 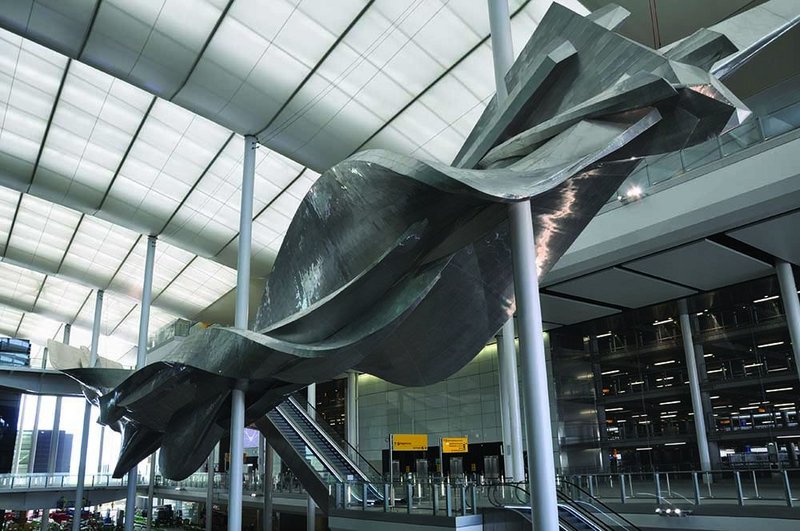 What’s the durability of public art? A bespoke work of art like Slipstream is tied to the lifespan of the building it is in, and can’t easily be moved elsewhere – though it was assembled in sections so could presumably be dismantled the same way. It would need another huge volume with equivalent column spacings. ‘You normally sign a contract for anything between three and 60 years,’ says Wilson, a veteran of public art commissions. ‘But of course, in 10 years’ time they may change their minds, Boris might get his island airport, or they may want to extend this so it links with Terminal One.’ That’s certainly the plan of Heathrow’s owner: the new terminal will eventually double in size, including the entrance atrium. So if politics dictate, Wilson may find himself being called back for a Phase 2 Slipstream.