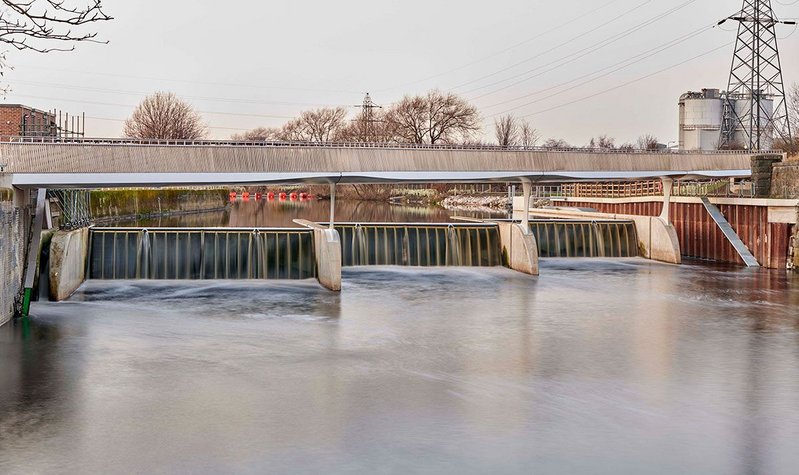 It’s not so often that I find myself taking a water taxi to visit a building – Venice excepted. But this is Leeds. Nor is my destination a building in the conventional sense. It’s all about the River Aire which comes tumbling through the arches beneath the railway station. Just downstream of that, where the Leeds and Liverpool Canal joins the river navigation, the (free) water taxi awaits. It takes me as far as Clarence Dock and the dour Royal Armouries Museum. After that it’s a brisk walk southeast along the towpath, which brings me to Knostrop Weir with its bridge.

This is part of an ambitious alleviation scheme begun after the devastating River Aire flood which hit the city at the end of 2015. There had periodically been floods before, but this was especially severe, damaging nearly 3,000 homes and 700 businesses in the fast-regenerating riverside corridor. Plans for flood relief were rethought: these should include more than traditional ‘defences’, and should involve everything from uplands vegetation management and overspill water meadows through to sensitively raised walls in the city centre, coupled with new technology to move flood water downstream faster.

Knostrop Weir is one of two schemes to deploy this new technology (new to the UK anyway), which does two things. It provides an echelon of three new pneumatically moveable weirs that can quickly be lowered to let floodwater discharge rapidly downstream, and a shared foot and cycle bridge, part of the Transpennine Trail, which perches on the weir abutments as what our judge Yuli Cadney-Toh called a ‘hoppity bridge’.

Working with engineer Mott MacDonald, Knight Architects has produced a 70m bridge which is a pleasingly elegant and ­dynamic thing in its own right, its undulating edges providing three wider points on the deck  where it is tempting to linger to watch the smooth rush of water, nearby boats passing through the lock, or wildlife – it was designed with the transport needs of fish, eels and otters in mind too; their strong revival on this once biologically dead industrial river is a major triumph since the 1970s.

On the sunny, cold winter’s day I visited, the bridge was well used by the public. Visually it dissolves from a distance: it is a surprisingly unobtrusive design in this industrial and post-industrial landscape, minimising structural bulk by having the weir walls double as foundations for the bridge.

The footway hopping across a weir is an old idea, here brought up to date. It is also well detailed, with a hardwood handrail and stainless steel balusters. The steel bridge supports, leaning at a dynamic angle from the weir walls, are very slender, allowing for a slight horizontal flex without the need for expansion joints. It is apparent that this is an exercise in minimum structure with maximum benefit: it does not shout its archi­tectural or engineering message, rather working through understatement.

It is a tribute to the design that you don’t stop to look at it, rather you use it as a ­seemingly inevitable route that draws your attention to the real attraction of the smoothly rushing water and semi-rural surroundings. Aside from acting as a kind of pier, the wider points on the deck also serve to make separation of cyclists and pedestrians seem natural.

All the judges liked the fact that an engineering-led project of this kind should consider the amenity and convenience of the public and be part of an overall landscape  improvement of this alternative route into and out of the city, ‘taking people to places they might not have gone’ as Kathy Mac­Ewen put it.

For me, it displays a clear intelligence and commitment to the old idea that public works are a matter of civic pride.