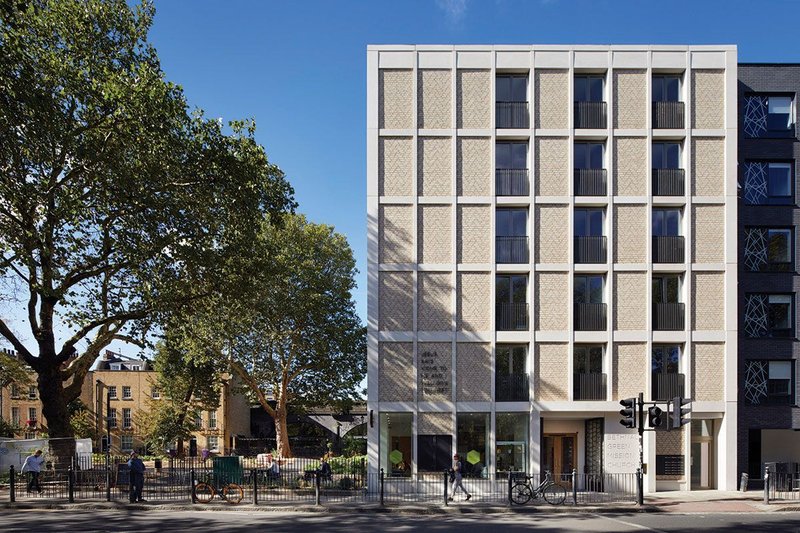 The street elevation and main entrance to the building, which incorporates 14 private sale apartments above the church. Credit: Jack Hobhouse

For the past couple of decades at least, when you exited the tube at Bethnal Green in east London and looked north there was a dank, gritty, anti-social feeling weighing over the area. You didn’t know what caused it but it didn’t make walking up Cambridge Heath Road inviting. The V&A Museum of Childhood might have been almost in sight but the casual grimness around made it seem that little bit too far – an underused park to the left, empty shops, boarded up buildings, clogging traffic and pollution crusted surfaces.

In recent years, however, the area has been cleaned up hugely – new cafés have opened, as well as bars and a hotel, and there is a new memorial to the people who lost their lives in the Tube disaster of 1943, designed by Arboreal Architecture.

The operation is a credit to Tower Hamlet’s planners who recognised this as a kind of set piece historical urban landscape – Soane’s grade 1 listed church, St John on Bethnal Green, at the crossroads, the grade 2 listed Georgian terrace opposite on Paradise Row and the grade 2* V&A in the former Rundbogenstil-style municipal museum beyond the avenue of trees with gardens on either side. They steadfastly protected it during the years of downturn and are continuing to do so now the regeneration money is coming in.

Within this rejuvenated view from the underground, the renewed Bethnal Green Mission Church – now a six-storey pale brick building designed by young practice Gatti Routh Rhodes – singlehandedly makes possibly the largest contribution to the improved, lighter, friendlier feel. This, as well as its intensely flexible and wide community use programme, is what this year’s judges felt made the building deserving of a MacEwen Award commendation. ‘It’s lovely,’ said judge Julia Barfield.

Located at the head of Paradise Gardens, between the elevated railway on one side and the trunk road on the other, the new facility is at once a church, café, office, community space for various uses including a night shelter and food bank, as well as a vicarage and 14 private sale apartments. It replaces a three-storey brown brick and concrete structure that was built in 1952 as one of the original NHS buildings – a combined surgery, charity and church.

By 2009, however, it had become increasingly clear that the building was no longer fit for purpose – the roof needed replacing, the heating caused perpetual problems and accessibility in such a public building was an issue. There was even a step to get out of the lift at each level. On top of these considerations, external changes over the years had destroyed the building’s relationship with the park.

‘Tower Hamlets was keen for it to be an architectural statement,’ says Richard Gatti of Gatti Routh Rhodes, which came on board in 2011/2 and set up properly on the back of the project in 2013 after the ­developer Thornsett Group’s previous scheme failed to get traction. ‘We knew we had to include plans to reinvigorate this end of the park as part of our proposal.’ The project has done so graciously by relandscaping the top end, opening a through-path across it and placing a community café on the park/street corner with entrances from both and the possibility of animating the park with coffee drinkers sitting out in the sun.

In general the building is split between community and public functions on the basement to third floors with the church space defined by a projection in the facade on the park side, with apartments above represented by deep inset loggias.

Externally, in terms of the Mission Church’s architecture, the building is similarly gracious. It takes its cues from its context: the reconstituted stone pilasters set against the buff brick of St John; the proportion and rhythm of the Georgian terraces; and the intricate brickwork of the V&A, but in raking monk bond instead that suggests a chevron pattern – and remains lower than the museum in height.

Inside, the new building is a complicated, tightly packed space that scoops natural light into every area, knitting and overlapping uses. The stair in the café at the front leads down to a gallery in the basement as well as showers for the benefit of users of the night shelter, and there is a kitchen for use by the café and food bank as well as a large multi-functional hall that pokes out at ground level at one end to bring in light. The room can be divided in two so different activities can take place simultaneously.

On the ground floor, the church is placed in the heart of the plan and is one of the more finely treated spaces, with a diamond concrete beam ceiling that suggests a tradition of ecclesiastical ribbed arches. The massive structure is beautiful and functional too, representing a transfer from large public space to the more cellular residential units above – constructed from CLT. The chevron pattern continues in the stained glass windows, entrance gate and even the church’s new logo. The hall is used for services on Sundays but can be hired by external groups for workshops, conferences, presentations and other community functions. It’s non-hierarchical, without an altar or baptistry, and is designed to sit up to 100 people.

Upstairs, the offices and bookable meeting rooms overlap and look into the church. Further up, the apartments, which enabled the development and had to be carefully balanced with the social good of the community spaces, are designed according to the London Housing Design Guide.

‘We spoke about two ways of doing a church,’ says Gatti. ‘It could stand alone like Christ Church Spitalfields, or be built into the streetscape like the former French church opposite, now a mosque, which were built within a few years of each other. That one continues the roofline of the neighbouring buildings, has weavers’ lodges at the top with working and living spaces… That idea of the church as part of its community was attractive to us.’

Here, Gatti Routh Rhodes has certainly achieved that. The new Bethnal Green Mission Church acts beyond its walls by uplifting the area and creating a more hospitable environment around the caring and social spaces within. You can imagine a lot more people will cross its threshold as a result.