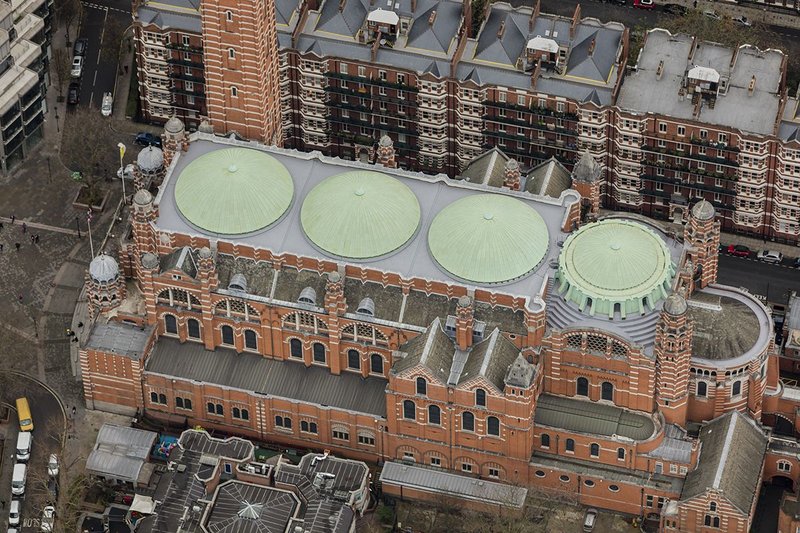 Abutments to the copper domes and brick parapets were the biggest challenge.

When Westminster Cathedral’s roof was first asphalted back in 1903, it would have utilised naturally occurring asphalt deposits dug up from an overseas lake.

These days, things are done a little differently. Instead, IKO’s Permaphalt – a polymer modified mastic asphalt – was specified for the extensive reroofing of the Roman Catholic Cathedral by Cathedral Architect, Michael Drury from St Ann’s Gate Architects.

‘Asphalt had worked well for the Cathedral in the past and there was no reason why it shouldn’t again,’ he says, adding that the new roofing’s 25-year guarantee clinched the decision for a like-for-like replacement.

Drury had identified the need to replace the roof surface as a priority in his quinquennial inspection of the Cathedral, which was designed in the early Byzantine style by JF Bentley. Although the roof had been repaired over the years, the report detected cracking in the surface and upstands and the presence of moisture within.

The subsequent reroofing project involved negotiating four copper domes within the rectangular roof plan of the nave and chancel and dealing with deteriorating parapets at the perimeter. The logistical challenges of installing scaffolding at the grade I listed building – essential to facilitate the removal of the original roof surface and to bring up the new materials and equipment required – provided a further level of complexity.

After the old asphalt was removed, the concrete roof-substrate was found to be in good order and was cleaned and dried before a separating layer of Black Sheathing Felt was applied. This was followed by two coats of Permaphalt laid hot, to a thickness of not less than 20mm in total. 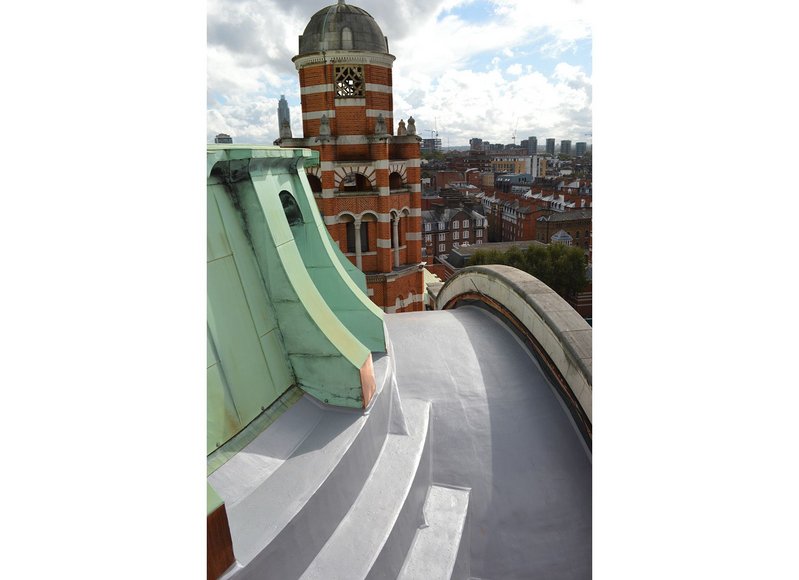 Once cool, the surface was covered in light grey solar reflective paint. This reduces heat build-up in the roof, maximising durability.

Abutments to the domes and perimeter presented the biggest challenges, along with negotiating the steps and curves of the chancel roof. The soft brick parapets required particular attention in order to avoid leaks occurring where the new asphalt is dressed against the brick.

This interface was managed by the introduction of a lead apron down over the asphalt kerb. The lack of such flashings previously had led to water tracking behind the upstand and becoming trapped beneath the roof covering.  Above the lead, a new three-coat lime render was applied on expanded metal lath to the back of the parapet to give further protection against water ingress.

New copper perimeter flashings were added as necessary where the asphalt meets the copper domes. Some panels and clips were also replaced on the copper coverings, which had been added to the concrete domes after the Cathedral suffered blast damage in the Second World War.

‘With the right skilled specialists, when using traditional materials like this the project is relatively straightforward once safe access has been provided,’ Drury says.

The £340,000 contract was carried out in a single phase over six months and was grant-aided by the First World War Centenary Cathedral Repair Fund. The project won in its category at this year’s Roofing Awards.

To find out more and download additional resources visit