Mud, woven polypropylene and barbed wire are being used to build sound-proofed outdoor classrooms under the Heathrow flight path 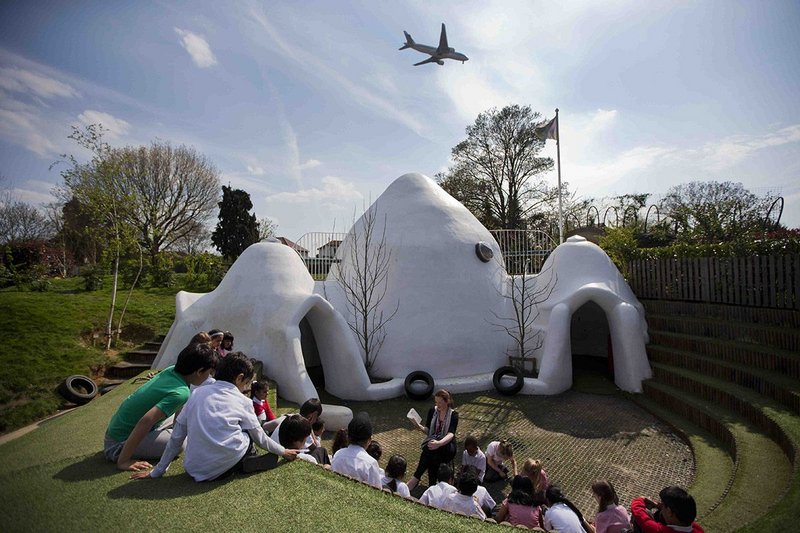 A form of adobe hut, originally intended for astronauts colonising Mars, is being installed at schools along the Heathrow flight path to create noise-insulated outdoor classrooms.

The tri-domed ‘Superadobe’ huts, designed and built by contractor Small Earth, feature robust walls between 400mm and 750mm. They are shaped using long tubes of woven polypropylene, filled with compacted soil excavated from the school sites and held together by layers of barbed wire.

Heathrow is offering local primary schools grants of up to £85,000 to install an adobe building to provide quiet outdoor learning spaces, as part of it Community Building Noise Insulation Scheme.

Eight huts have been built so far, as part of a total £1.8 million investment in 21 buildings due for completion by 2019. The most recent, at St Michael and St Martin Catholic Primary in Hounslow, is able to seat 30 children and was built alongside a large  amphitheatre created by the excavation.

Jared Bella, a senior manager at the school, who led the grant application, told RIBA Journal: ‘Our school is right under the flight path, the hut really counteracts noise so we can continue talking to the kids without interruption, where previously we had to stop lessons. Being from New Zealand, where outdoor learning is very popular, I saw the grant application as an opportunity to provide education outside the classroom in a building that retains the benefits of an outdoor setting, accessed via three large open doorways that enable fresh air to flow through.’

The sustainable form of construction and its reliance on on site materials further minimised disruption at the school by removing the need for multiple lorry deliveries. The circular teaching space, with its unadorned walls, is ideal for multiple teaching uses, said Bella, having functioned as an air raid shelter during a lesson on World War II, and a ‘reading grotto’ during the school’s reading week.

Superadobe buildings were invented in 1984, by Californian architect Nader Khalili in response to a NASA call for designs for human settlements on the Moon and Mars. More recently they have functioned as emergency shelters in remote locations. ‘It certainly looks very sci-fi, like the strange hut structures on the planet Tatooine in Star Wars. The strangeness of the architecture has had the unexpected effect of stimulating learning, we’ve noticed children who previously had little interest in reading with their noses in their books inside the hut,’ concluded Bella.