Work on internal navigation and interactions carried out with The Bartlett Space Syntax Laboratory helped architect reconfigure space effectively. Now it wants to extend its use of data analysis 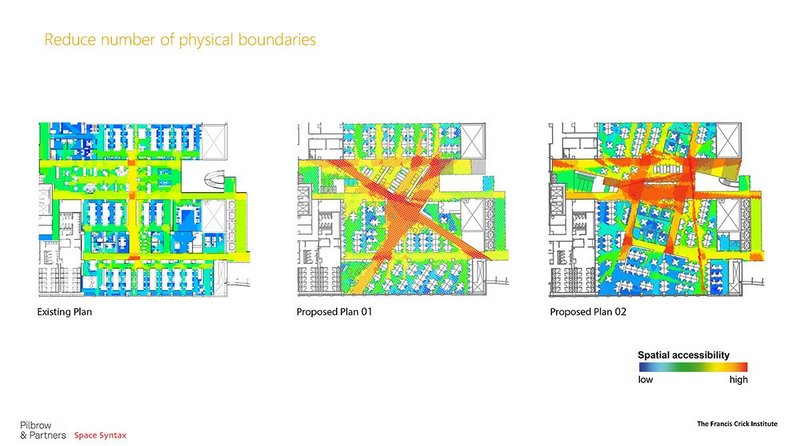 Advanced AI and data modelling techniques ‘heavily assisted’ in the redesign of interior spaces at the Francis Crick Institute in King’s Cross and now architect Pilbrow & Partners plans to expand its application of the technology.

The practice was appointed in 2018 to enhance the working environment for the Institute’s 250-person strong operations team, to adapt spaces to encourage greater collaboration and knowledge sharing within, and between, departments.

‘There were reports of some dissatisfaction with the previous layout, so we wanted to really understand what worked and what didn't, and at the same time get a better handle on how movement worked in the space,’ said founder partner Fred Pilbrow.

A mix of qualitative and quantitative research, including extensive questionnaires and face-to-face interviews, was carried out to understand employee preferences and behaviours. A third survey, undertaken by The Bartlett's Space Syntax Laboratory, examined how people navigated the space and where chance interactions tended to occur.

Among other things, this revealed a major mis-match between the amount of time people thought they spent at their desk (70% on average), and the actual amount of time they were observed at their desk (about 40%). Space Syntax carried out detailed floor plan analysis exploring potential movement paths and lines of sight as opportunities for collaboration.

‘The evidence helped us begin a discussion about cultural change in the workplace and the move to an agile, activities-based working model,’ said Pilbrow.

The operations team includes 12 departments. Data from survey questions related to departmental inter-connectivity and differing needs for engagement between teams was fed into a form-finding algorithm, developed in-house by Pilbrow’s technology group.

The algorithm tested different adjacencies, based on a set of criteria, to see which were more effective. ‘Daughter’ versions of the best ones were then developed and re-tested through a process of evolutionary optimisation before arriving at the final optimal configuration.

The software looked for optimised interrelationships between three parameters: the number of interactions between one department to another, based on online survey results; the proximity required, based on head of department interviews; and which departments needed to be visible to each other, regardless of distance.

It also took into account the number of staff for each of the 12 departments involved in the study and the space allocation requirements.

‘It was the first time we were really using AI in anger to inform our design,’ said Pilbrow.  ‘It's the beginning of a really interesting journey and we're going to do much more with this as an approach on future projects.’

The completed interior for the operations division improves connectivity between the first and second floor and broadens the functionality of spaces. A new organic legible layout gives each department direct exposure to the main access route while quieter areas further away from the public route provide more opportunities for focused work. A new accommodation stair was introduced to improve the physical connection with the rest of the institute.

A natural material palette, including extensive use of timber, is intended to resonate and contrast with the existing expressed concrete and steel to create a more comfortable environment.

Tal Ben-Amar, partner at Pilbrow & Partners says: ‘When you walk through the new spaces you can’t tell they were done with AI; for example there's no flashy geometry, but they are very bespoke and tailored to each of the user groups. It would have been much harder for us to achieve this level of resolution without AI.’

The practice is exploring how to apply AI solutions to other areas of design, including real-time daylight and sunlight analysis, to provide accurate feedback on the consequences of different massing approaches. The technology may also be used to score different layout configurations, for example different mixes of co-working spaces, studio offices and breakout spaces, against a target brief.

‘For a problem to be meaningful to AI, in some sense it needs to be both complex enough to be worth solving and simple enough that you can write an algorithm to solve it,’ said Pilbrow. ‘I'm still sceptical that a computer will ever be able to appraise all the myriad functions we have to consider as architects and master planners, perhaps instead its role is to provoke and suggest. Projects ultimately need to be a marriage between good design and the backup you get from good data analysis,’ he concludes.