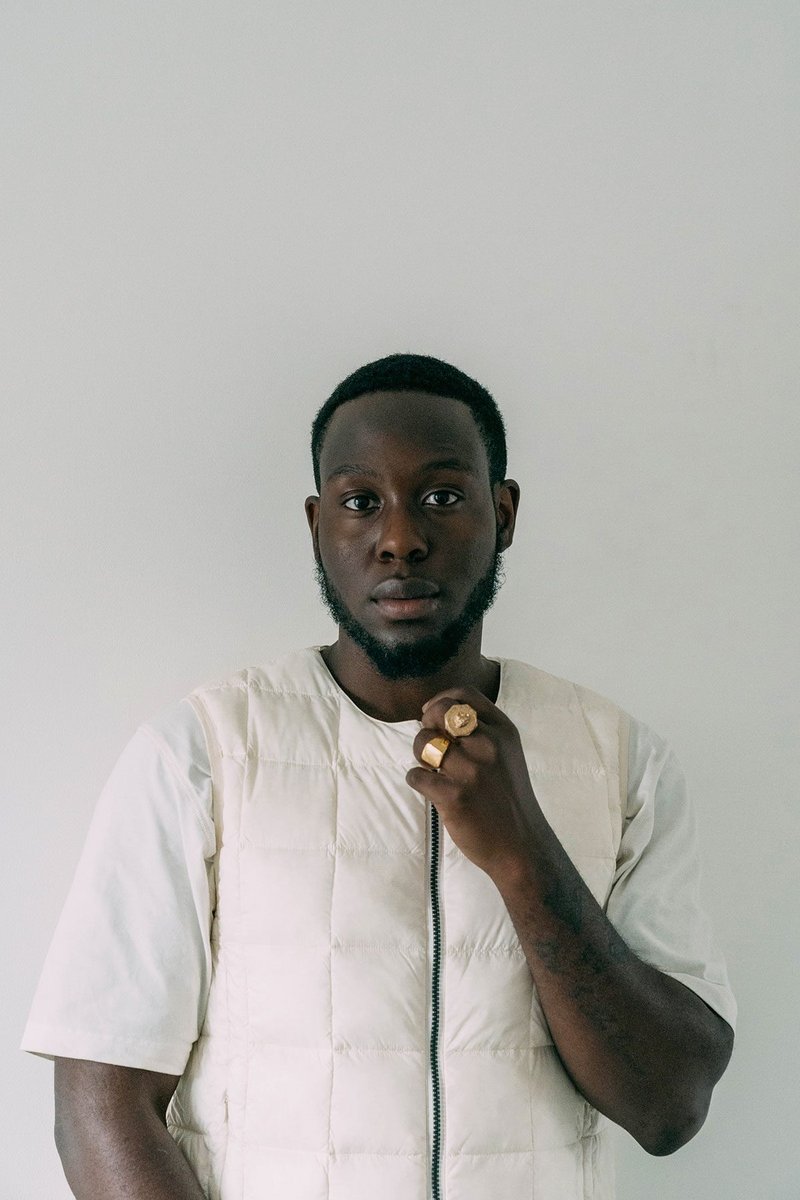 Caleb Femi is powerful on the small worlds created by huge estates. His poems offer unexpected insights into the experience of living in one. Credit: Aiden Harmitt-Williams

Poet Caleb Femi’s first collection, Poor, includes poems entitled Ingredients and Properties of Concrete and A Designer Talks of Home/A Resident Talks of Home. Brought up on the notorious North Peckham estate in south London, his book is described as ‘an ode to a troubled yet enchanted world’.  These are primarily poems about life within a community: verse, dialogue, diary entries evoking a world where a ‘blade to the gut’ is realistic fear, but where concrete can hold a boy ‘soft as a meadow might a lamb’. However, as the two-hander poem suggests, Femi doesn’t just want to articulate the experiences of residents (predominantly young and male), he wants to explore how this world came to be. He also gives us glimpses of ‘all that hopeful good on powder-blue paper’ no doubt expended in the Southwark Council’s architects’ office back in the 1960s. The environment that people are brought up in fascinates him.

When we meet in Deptford where he now lives, he stresses that while he thinks London’s post war housing estates are ‘not perfect and shouldn’t be absolved [of responsibility for social problems], nor should architecture be a scapegoat. Architecture is all too easily thrown under the bus,’ he says, ‘It’s unfair and reductive to blame failed designs’. He believes estates have two problems: a ‘lack of integration with nature’ and ‘no feeling of accessibility’ – the downside of the deliberate ‘self-containing nature of design’ which provided shops and launderettes so that the ‘only time we ever left the estate was to go to church or visit family’. His primary school was visible from the bedroom window and he and his friends knew more about the West End from TV than real life although they lived only three miles from Trafalgar Square.

In addition to poems, Poor includes Femi’s photos, exterior and interior shots as well as portraits. These both acknowledge and counter the strong shadows and fetishized textures of Instagram’s fans of brutalism and photo-doc clichés of boys in hoodies.

It’s Femi’s acute interest in lived experience and architectural ideas and intentions that gives his work a fresh optimism. He is keen to know if architects today have ‘a focus on responsibility for the lives of others’ and whether architecture aspires to ‘reverence, seriousness and sanctity’ – as he clearly feels it should. Kevin McCloud’s Grand Designs TV programmes, first aired in 1999, were what sparked his curiosity about architecture. Watching in an overcrowded flat on the North Peckham estate, ‘I was as likely to go to Hogwarts as build my house of dreams. It was on a par with fantasy shows for me’. 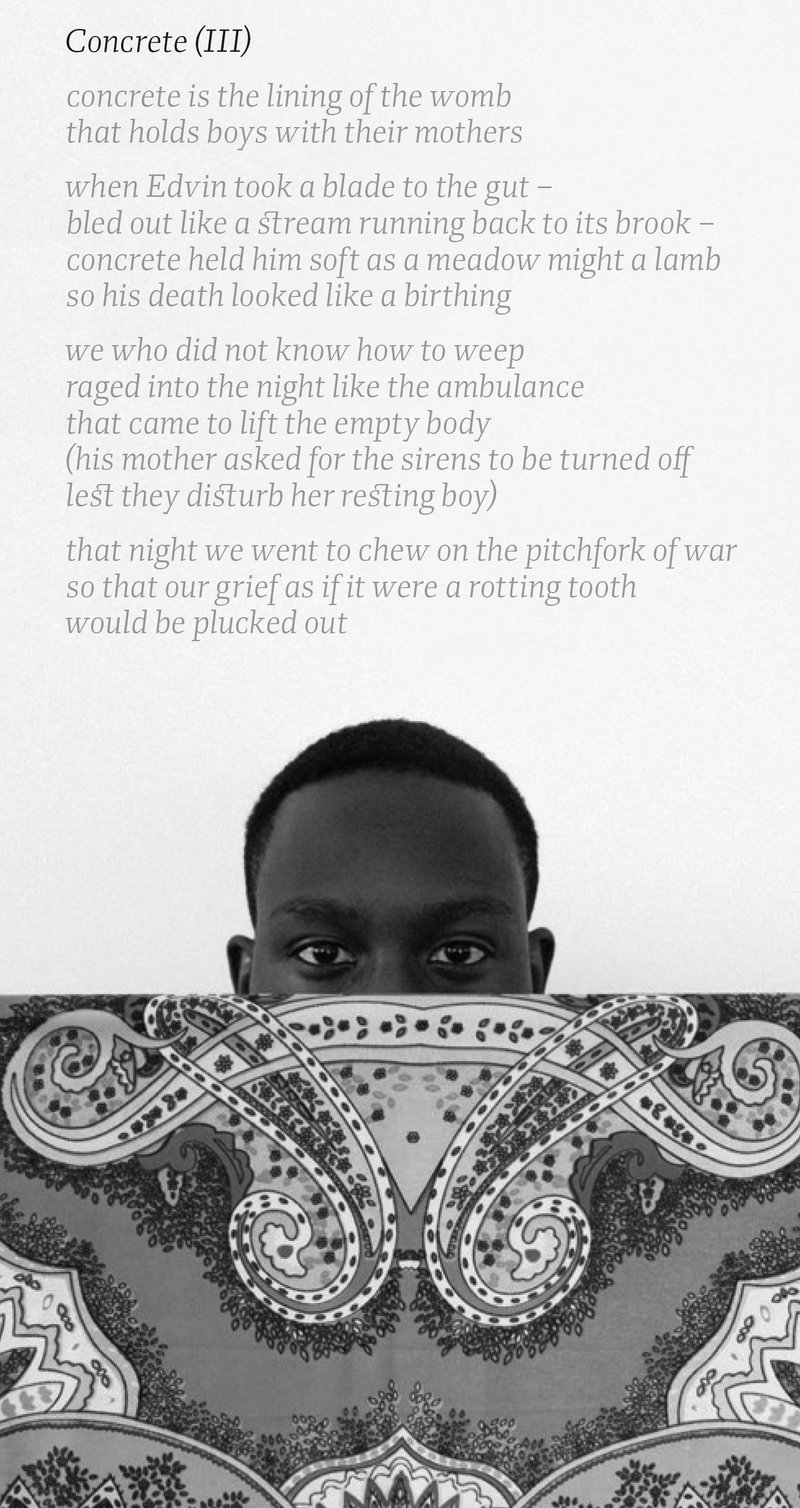 Concrete (III) is one of a series of poems named for the material. Credit: Aiden Harmitt-Williams

He is very alive to the current positioning of post-war estates as the epitome of dystopian coolness, to the glamourisation of the grittiness of brutalism and its recent exploitation in music, fashion and film (now past its apex in his view).  But he does play up to those very tropes – there are poems entitled Concrete (I) to Concrete (V), and he prefaces a longer work, Because Of The Times, with a very consciously tweaked quote from John Boughton’s Municipal Dreams (2018). This hugely sympathetic study of the history of council housing grew out of a popular blog, and notes that the North Peckham estate was made up of ‘65 five-storey blocks’. Femi consciously changes this in his epigraph to ‘multi-storey’: high-rise and concrete still dominate public perceptions of social housing and it feels as if he has co-opted that as part of his raw material.

North Peckham was completed in 1970, 20 years before Femi was born.  By 1976 it was already described by Building Design as ‘vandal-besieged’. Unlike its near neighbour, the slightly earlier, system-built Aylesbury Estate, it is neither high-rise not concrete but was envisaged, as fondly evoked by Femi, as ‘a paradise of affordable bricks, tucked under/a blanket’.  It originally consisted of 1444 homes in cross-walled, load-bearing brick blocks, all linked by ‘streets in the sky’.  In 1994 it was one of five adjacent estates lumped in together by Southwark Council for a £60 million Single Regeneration Budget bid. It achieved tragic prominence in 2000 when ten-year-old Damilola Taylor bled to death there, on an un-overlooked stairway, stabbed with a broken bottle on his way home from Peckham Library. There is no shortage of architectural attempts to improve quality of life in this part of the city – where Alsop and Störmer’s copper-clad library won the Stirling Prize, and Alice Coleman and the Bartlett’s Space Syntax team subsequently pored over what might have caused failure. One of the strangest parts of the North Peckham mythology is that contrary to popular belief it has not been obliterated. Major segments remain: Femi’s reminiscences seem to be of a world that’s gone, but actually much of it remains in fragmented form.

Femi lived at the heart of the estate in Winchcombe Court, arriving from Nigeria when he was seven to re-join his parents who had travelled to London ahead of him. They were ‘seven bodies making do’ in a one-bedroom flat, until the family was rehoused in a brand new Pollard Thomas Edwards designed four-bedroom terraced house with a garden on nearby Watling Street as part of that regeneration project.

Crucially for Femi, there is no clear divide between the sense of belonging to ‘the Estate’ that he had in each of these homes, although it was the first that was perceived as a labyrinth by police who would give up a chase at its physical perimeter and ‘come back later to clean up’. Femi recalls that although living on a street was a physically different environment, the social context didn’t really change. ‘We had more bedrooms, but it was not that much of a difference’.  But the orange and yellow bricks and futuristic curved facade of the terrace seem not to have fed his imagination in the way the stairs of the mega-structure, smelling of bubblegum after their weekly wash down, have.

The poem A Designer Talks of Home/A Resident Talks of Home reworks lines spoken by Ilse Crawford in a 2017 Netflix series on design, and juxtaposes them with the voice of a young council estate resident, presented as if both are snippets from recorded interviews.  There is no straight offsetting of misplaced paternalism versus dystopian lived experience here, it’s a series of much more nuanced, funny and positively resilient comebacks than that. It’s ironically a non-conversation that feels ultimately optimistic and suggests that better communication between architect and public housing resident might be miraculously possible. ‘The lift never works so you take the stairs’ twists from a clichéd complaint of resigned frustration to an unexpected positive: ‘sometimes you pass your neighbours and catch up on the news’. Crawford’s potentially smug reflection that ‘you really need to choose materials that are functional yet luxurious’ (all very well if you’re doing a Kensington bathroom) rubs up against the energy of ‘like the other day I see man like Tevin in a Gucci/tracksuit, Egyptian cotton, with the Belincies’.

During lockdown Femi has been writing about clubs: keen to get back to ‘spaces for merriment and revelry’.  He’s obsessed with the fast erasure of venues impacted by gentrification, and by what survives relocation.  By ‘how physical space allows things to happen’, by what makes makeshift spaces and highly orchestrated ones work. Above all, he wants to laugh and dance and be in ‘spaces that make me feel good about myself’.  As do we all.

Catherine Croft is director of the Twentieth Century Society

Read Madeleine Kessler on why Poor is essential reading for architects