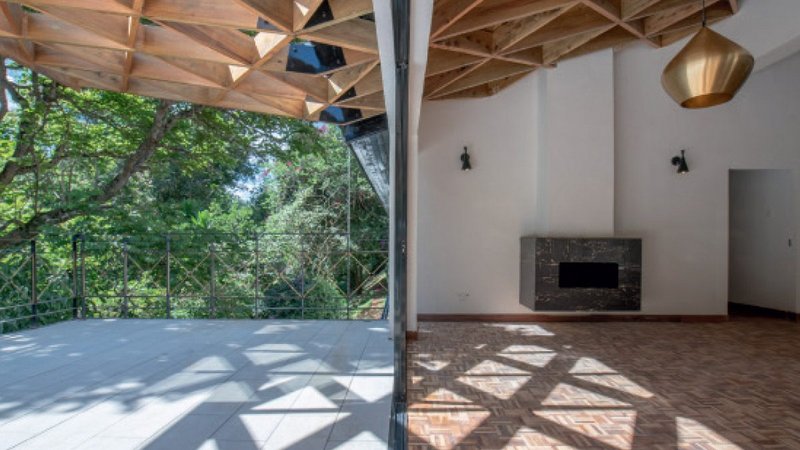 The house’s new verandah helps to draw the outside in. Credit: MOD Photography

What must have felt initially a dream commission might have become a poisoned chalice for Helena Rivera and Kalliopi Bouzounieraki of London practice A Small Studio. But it’s funny how things turn out. The client, a British raised Kenyan working for the UN presented the firm with a large site on which sat an existing bungalow in a well-heeled suburb of Nairobi. The site was ‘an absolute jewel’, says Rivera, steeply sloping and covered in rich, verdant tropical plants, yet whose canopy the existing building turned its back on. But far from ‘raze and build’, the client wanted bling – but on a budget – which precluded full removal of the bungalow. The firm’s proposal was a measured and controlled one of demolition, extension and augmentation that has proved transformatory.

The main move has been to extend the house into the former terrace. Gone are the mean windows that conceded a view of the trees, replaced by floor to ceiling sliding glazing that opens onto a new verandah cantilevered out over the garden. The gesture has been marked by a new roof form of trellis rafters; one half encloses the terrace as new living space while the other, supported by a new concrete beam on the glazing line, launches itself over the verandah. This dramatic new space for al fresco entertaining is reinforced in detail by brass cross-braced balustrades, whose interstices are marked by inset medallions of Kenyan cow horn spinning playfully on their axes in the breeze.

Inside, the moves might be less grand but they’re no less effective. The existing suspended ceilings were ripped out to reveal the roof structure, now white-painted in bedrooms to draw light into the space. Existing hardwood floors were cleaned and added to in the living room, sustainably sourced from India. The firm was keen to manifest the frisson between the artisanal and the everyday, so the fitted Mvule hardwood joinery, inset with ­precious dark palm wood handle reveals, is counterpointed with door panels of rough hessian covered timber.

Surprisingly for reduced cost reasons, the firm decided to procure most of the higher-end lighting, tiled flooring and sanitaryware in the UK, which involved a container-full of goods pulled together here and delivered to the site in one go eight weeks later. Locked away in a room and strictly audited when taken out, were Tom Dixon and Holloways of Ludlow light fittings, faux marble tiles from Solus Ceramics for splashbacks and showers and ceramic flooring from Solus, Domus and Tiles Direct. Taps were sourced from Crosswater, with ironmongery from G Johns & Sons. Drawing on the brassiness of this and the Tom Dixon, the firm designed the bold, gold-effect stainless steel sheet timber sliding door separating the huge living/entertaining space from the big kitchen; announcing with a closing flourish the end of cooking and the start of dining.

But there was also the clear desire to contrast the ‘bling’ factor with the raw and simple. And so the architects came over on a few site visits, initially to talk through and then to attend the casting and installation of the dyed concrete sinks in the bathrooms. As with all the local craft on evidence in the home, the architects worked with the contractor and craftspeople to modify the intent so as to achieve the best result. This iterative process was a first for the contractor, but they obviously enjoyed it – the studio has secured a second commission in the capital off the back of this, and has brought the contractor along with it.

You’d have thought that all the international travel would have come at greater client cost but A Small Studio’s Rivera says the startling use of a JCT contract in the Kenyan context and UK sourcing not only saved money but produced a home that looks like a million dollars. That’s quite some bang for your buck.•