Renzo Piano’s £80m new arts centre in Santander may be divided in two, but it is intended to bridge the gap between its citizens and its art and reconnect the city with its harbour 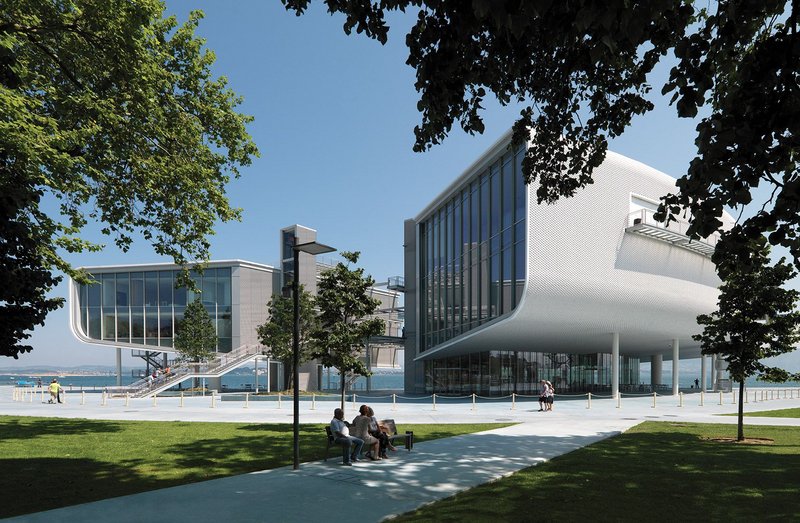 The Centro Botín, looking south east to the harbour. The gallery and public space is the Pereda Gardens and marks the start of the Paseo eastwards to Santander’s sandy beaches. Credit: Enrico Cano

Standing high above Santander on the Mirador Río de la Pila, looking down towards the centre and the bay beyond, it’s easy to understand why Renzo Piano decided to cleave his new arts centre in two. Seen from the hills that jam the city into a long, narrow south-facing strip along the port’s harbour wall until it gives way to sandy beaches to the east, his principle that residents should have unrestricted access to the view beyond the Centro Botín is clearly honoured. Even from here the building’s conscious physical split does not belie its purpose.

The division is even more palpable from the Mercado de L’Este, a market directly aligned with the arts centre, which is raised on steel columns to preserver shoppers’ view of the sea. It was perhaps a political decision not to site it further to the west where it would have aligned with the Arco del Banco Santander, whose neo­classical grandeur was the first home of what is now Santander, one of the biggest banks in Europe; one that has made its founders, the Botín family, among the richest in Spain.

The Centro Botín is the first physical manifestation of the eponymous foundation, set up in 1964 by the late Emilio Botín, whose endowment is funded by a share of the bank’s dividends. It aims, through working with hundreds of schools, to develop Spain’s cultural and social agenda, as well as funding high level innovations in digital and biotechnology. In its work with new and established local and international artists, it aims to bring the best of European art to the region of Cantabria – and showcase them all in Renzo Piano Building Workshop’s £80m waterside arts centre, kicking off with Carsten Höller’s first solo show in Spain.

A quarter of the budget, £20m, was committed to a transformative piece of infrastructure that would connect the city with the arts in a more than an ideological sense. Previously, Santander had been separated from its waterfront by a four-lane highway feeding the port to the west. Sinking this into a new tunnel not only allowed the 10,000m2 Centro Botín to be built on the site of a former ferry car park but meant the city could extend out into the enlarged Pereda Gardens and beyond to the steps of the centre itself.

Residents now have easy access to 2,500m2 of gallery space, a 300-seat auditorium, classrooms, work spaces, a lower level restaurant, a shop and, most symbolically perhaps, a 200m2 steel and glass raised public space that overlooks and partially cantilevers over the bay itself.

The building is perhaps best defined by the negative space that nestles snugly between the two hull-like sections formed of steel ribs connected to steel beams sitting on the columns and clad in 270,000 iridescent ceramic discs that pick up notes from the northern Iberian peninsula’s ever-changing skies. It is not for nothing that this space rapidly earned itself the moniker of the ‘Pachinko’, the popular Japanese gambling phenomenon that involves firing hundreds of stainless steel ball bearings at speed around a vertical pinboard.

Renzo Piano says the name originates from the fact that he has made this raised glass and steel plaza the circulatory centre of the building; the visitors are the little balls running up and down its dual facades. But a Pachinko game is as much about the pins as it is the balls. And the pins here are the staircases, glazed canopy structure, lifts and routeways that populate and enliven these external facades. Piano says this is deliberate, adding that he hates internal stairs and lifts as they ‘take away valuable space’. That may be true, but in this exposed maritime context, it had implications for the specification of the glazing and architectural metalwork.

Echoes of the Pompidou Centre abound here, not least in the gerberettes that project from the roof beams on either side of the raised piazza to support the deck itself and the cantilevering walkways that push out vertiginously into the harbour. Sitting up on its concrete stilts, the whole structure is braced by the painted steel beams that run between the two side walls separating gallery from auditorium and admin blocks, filled in with frosted structural glass, but it is left to the gerberettes to do the job of supporting the walkways, which are far more ‘live’ in their nature – with a distinct bounce at their extremities. The steel louvre cladding of the walls is painted too, to avoid corrosion from the saline air.

Elsewhere, for the stairs and balustrades, RPBW and associate architect Luis Vidal Architects decided to push the boat out and go for marine grade steel. On balustrades this is manifested as uprights of dual solid steel flats topped with handrails of rolled hollow sections; a solidity delicately counterpointed by an interstitial mesh of stainless steel wire, akin to a fisherman’s net – perhaps no coincidence given that Piano knew Emilio Botín was a keen angler.

The marine grade steel is carried through onto the extensively glazed north and south elevations. Here, 5-6m tall panels of high performance solar control double glazing are held in place with steel mullion sections running the full length of the space. On the south facade this is augmented with a second, outer skin of glass and a ventilated cavity to mitigate heat gain to the main gallery spaces. While the expanses of glass offer visitors a stunning view of both harbour and city, some might find it strange to have an art gallery so flooded with direct sunlight, especially given Piano’s past, highly engi­neered control of its ingress in previous buildings, such as the ferro-cement leaves of the 1987 Menil Collection and the 2013 extension to the Kimbell art museum, both in Texas (PIP Jan/Feb 2014).

Lighting in a grey city

There is a nod to such technical solutions in the thin, elegant, bidirectional frame structure of the upper gallery ceiling, but perhaps less of the ingenuity, topped as it is with simple skylights, fritted glass diffusers and an internal layer of adjustable horizontal blinds. Piano attributes this low-tech approach to the duller (and wetter) climate of the northern Spanish coast. It’s a view echoed on the facade in his choice of the mother of pearl finish for the ceramic discs on the building’s facade as a ‘way to make the facade interact with grey light – and this is quite a grey city.’ It also justifies the secondary purpose of the raised building as a huge shelter for the Pereda Gardens during one of Santander’s frequent squalls.

The enormous glass and steel lift structures that pop up on both sides of the Pachinko act like snorkels, suggesting things going on beneath the surface. It’s not just visitors who are served with their generous height – they’re the only means of moving large artworks up from the basement level storage areas. The basement itself forms a subterranean connection between the two sides of the building and links to the access road that merges into the highway tunnel.

The apparently splendid isolation of the Centro Botín is, in fact, a conceit; it’s part of the wider strategy of a gallery linking art back to the city and, by extension, out into the harbour itself.