In a building that had been adapted and extended over 400 years, a project to restore and extend again demanded a thoughtful balance of restoration and new build. Happel Cornelisse Verhoeven and Julian Harrap made a seamless fusion of the two

Built in 1640 during Holland’s Golden Age by city architect Arent van ’s-Gravesande, Leiden’s palatial De Lakenhal cloth hall was testament to the city’s economic might and the renown of its main commodity. But if the impressive classical language of its facade spoke in power terms, its H-shaped plan was far more pragmatic, dealing with utility and process rather than civic and global stature. Merchants arrived by boat at its canal-side walled courtyard, submitting their goods to initial quality control in the open air or beneath the sheltering arcades of its two wings. From there merchants were received in the hall’s ground floor vestibule and left to wait in De Lakenhal’s northern courtyard, their goods taken to the first-floor trading hall to be sold.

Off this main trading hall four rooms served official and ceremonial purposes for the cloth guild: the Governor’s Office, the Steelmaster’s Office, the Brewmaster’s Room to oil the wheels of business, and, perhaps most importantly, the Stamp Room. Here, cloth meeting the guild’s quality standards was ‘stamped’ with a lead embossing of the city’s coat of arms, making it tradeable globally. Visitors to De Lakenhal Museum will chance upon this motif all over Rotterdam firm Happel Cornelisse Verhoeven’s new extension – with conservation and refurbishment by London’s Julian Harrap Architects. 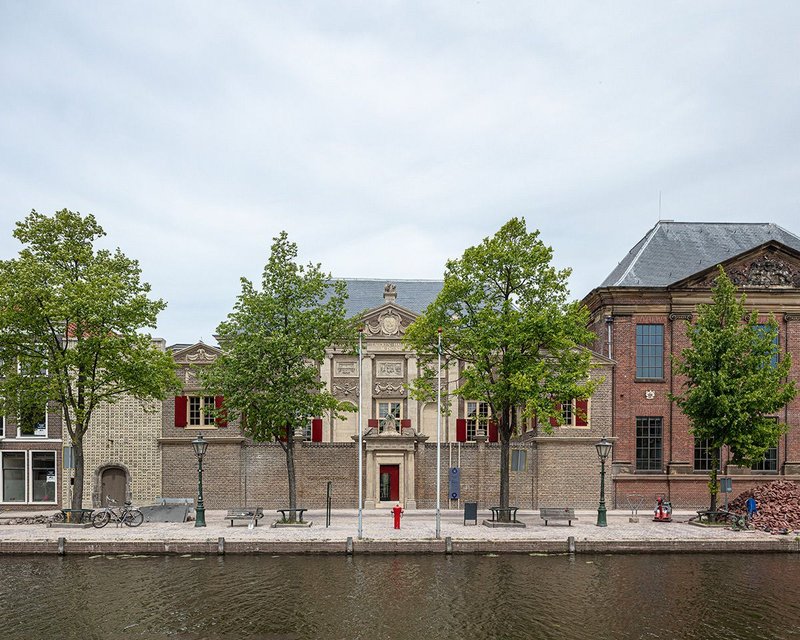 The south face of the De Lakenhal museum facing onto the canal. Credit: Karin Borghouts

If these historical functions appear self-evident to the visitor, that too is due to the architects, as changing use and piecemeal addition in intervening years had rendered the original building almost unrecognizable. A public museum opened in 1870 in its attic storey, reached by a new stair in the north courtyard, the lowest flight of which was relocated when the new Harteveltzaal gallery was built two decades later. A neo-classical extension with its own entry, added to the museum’s east wing, it compounded the spatial confusion with a warren of internal corridors. And when a 1980s steel and polycarbonate canopy clumsily enclosed the south courtyard, the building’s descent from monumental via the civic to the municipal was sealed.

The latest scheme, won in competition in 2013, extended the complex to the west and north. It created two new state of the art gallery spaces below stacked service and administrative functions for the museum, and had at its heart the notion of stripping away past additions to reveal De Lakenhal in its former guise – a task that HCV Architects felt was best addressed with Harraps’ expert input. Under Harraps’ reinstatement and reinterpretation of the past plan, legibility is created for visitors with the £16 million result revealing the south courtyard in its full glory and the stair and circulation in the north courtyard making way for an orientating, internal central atrium, the Achterplaets.

The museum’s new, four-storey post-modern north elevation, overlooking the Lammermarkt public square, is the most obvious aspect of this transformation. But if it looks radically different to the rest of De Lakenhal, HCV was, says partner Paul Verhoeven, inspired by van ’s-Gravesande’s original design. ‘While the concrete structure of its rear elevation is quite tall, we emulated his ideas to mitigate its scale with the Lammermarkt,’ he explains. ‘Where van ’s-Gravesande used projecting wings to deal with the lower scale of the canal frontage and the taller palace behind, we have fused the two in our elevation.’ Here, brick corbelling reveals itself by degrees from the facade of pale grey/green Petersen brick, delineating in negative the roofline edging the Lammermarkt, resulting in its angled window profile. Verhoeven adds that the decision to minimise surface modulation at upper levels was behind the gold powder-coated aluminium window sections, detailed to keep brick, glass and frame in line with each other. Seen together, there’s a sense of almost defensive drama.

It’s one aided by the complexity of the brickwork in its rusticated base which required thousands of hand-cast ‘specials’. While keeping the museum’s main entrance via the south courtyard was as much an emotional as practical decision, it did avoid any need for circulation from the Lammermarkt side. But even on this ‘service’ side of the building, there’s robust dignity to the detailing. The steel access door for trucks delivering artworks was designed with artist Hansje van Halem and is counter-pointed by the smaller entrance to workshop and office floors above. Balancing the modulated triptych of openings is the large arched deep-set window that gives direct views in and out of the gallery – across to the 18th century De Valk windmill. The three arches reference its hemispherical cap, Verhoeven points out.

From outside, HCV’s intervention is less obvious on the canal side, where the firm replaced an earlier extension with a narrow strip that provides a café and WCs accessed from street, courtyard or vestibule. It might be small, but it’s articulated. ‘Like the north elevation, we created a base plinth, mid section and crown. It’s classical but in a modern way,’ notes Verhoeven.

Internally, the biggest moves were reserved for the two new galleries and the north courtyard; revealing them necessitated wholesale removal of 150 years of random poché – including, controversially, the Joristrap staircase. But its snug repositioning behind the café was crucial to unlocking circulation, explains Verhoeven. Once more, van ’s-Gravesande’s north wings project visibly from his main block, forming three sides of the enclosed, rooflit Achterplaets, the north side of which has the entrance to the Harteveltzaal and HCV’s new galleries. ‘With the maze of corridors removed, the old north courtyard is the new orientation point for the museum, letting visitors move easily into our block, the original building, Harteveltzaal, or the 1928 wing,’ explains Verhoeven. Its ‘intelligent roof’ is formed of steel beams stretching its length, each alternate one containing a gutter for the double-glazed roof panels that run in a low zig-zag across it. High-level air feeds at the perimeter invisibly condition the space, exhausting out through De Lakenhal’s ground floor vestibule. Voids between bricks on its north face aid acoustic insulation to leave this concrete-floored hard space comfortably attenuated.

The two sizeable new galleries are characterized by HCV’s run of imposing precast concrete ‘light funnels’, which were craned onto site. At 11.7m and 8.2m long respectively, each 3.1m wide 1.7m high funnel is topped with in a glass panel, allowing artificial light to soak down to the galleries. And it brought additional benefits, says Verhoeven. ‘The funnel design added height to the spaces, which gives them real loftiness. Not only that, but the smaller gallery, with no offices above it, can be naturally lit.’ The upcoming Rembrandt exhibition in November may avail itself of this option.

The radical re-establishment of the two courtyards was part of the refurbishment strategy. ‘Opening the south court and moving ticketing back into the vestibule re-established the space as the formal reception it was historically,’ says Julian Harrap Architects’ Robert Sandford. ‘And opening up the north courtyard created a place of assembly as well as clearly distinguishing De Lakenhal’s constituent parts.’

Distinguishing parts sums up Harraps’ approach to the restoration of the old cloth hall – characterized more by creative interpretation than by faithful restoration. To do it, the firm took a view on almost every detail, resorting to revealing past layers, 17th century prints and drawings and, at times, sheer gut instinct. But the firm always intended to make it subtly clear when it was intervening on old structure which, explains Sandford, accounts for the bespoke detailing on all the doors and windows. He concedes that very little of the original building remained, requiring forensic hunting through the building’s reserve or contemporary records.

For instance, 1850 prints showed the walls and small doors of the four wings off the trading hall before they were opened out as large arches. ‘The remodelling lost the meaning of why the wing rooms were smaller and more decorative,’ says Sandford. ‘With the help of the sketches, we rebuilt them as they were to their rough dimensions and with shouldered architraves.’ Painted in three layers of mineral paint, the scale and feel of the original space is restored, helped by the replacement of parquet with a ‘new’ old floor of sourced English oak boards. Rebuilding the walls allowed duct runs to be optimized.

The firm made any new doors clearly modern, as gold powder-coated steel units. In one example a pair is set within twin timber arches that had been moved from the ground floor gallery to the trading hall above to access the staircase. Where doors were specified in existing openings, such as the vestibule’s stair and lift access, there was another approach. ‘New doors in a past alteration were done as a modern version of old panelled doors of the 17th century, with flush handles rather than traditional turn ones,’ adds Sandford. It explains, he continues, the anomaly in the west vestibule wall, where the ‘new’ door into the 1928 extension looks the same as the other two but retains its large plaster architrave. ‘We were always trying to make the distinction between what’s “original original” and “original contemporary”.’

The same strategy went for the windows. Where they were re-revealed in the clear out of the north courtyard, Harraps looked to two windows with original hinges and ironmongery that had survived the overhauls of 1778 and the 1930s: ‘Where we were reinstating windows in their original positions we used the original designs and ironmongery and had blacksmiths fabricate it for us. Contemporary windows used new ironmongery. Secondary glazing behind the old south windows used contemporary oak frames and ironmongery. It sounds confusing but they are subtle intricacies that reveal themselves to the viewer that takes the time to look.’

Harraps acted with the same confidence externally. Sizeable gaps between frames and brickwork were not re-pointed but filled with mortar, scored with a course line and ‘painted’ to emulate the brick tint. ‘With limited means we were not looking at the academic exercise of faithful infill but using processes that allowed us to make the architecture read as a whole without seeing the point where we intervened,’ says Sandford. ‘It took a lot of thought and expertise.’

As for the cream-painted Bentheim sandstone, whitened since it became fashionable in 1653, it too got the Harraps treatment. ‘Julian thought she had too much make-up on,’ remarks Sandford. It too was duly stripped back to its bare ochre colour after removing a ‘tenacious’ layer of black patination. ‘Revealed, we saw it was of fantastic quality and were loath to sandblast it, so we applied a thin tinted colourwash.’ It picks the stone out elegantly against the red brick and gives a real sense of repose to the canal elevation.

Both architects, from PiP’s visit, have more than fulfilled the brief they were set, creating a restored, energized and intelligible modern museum that is immensely popular with the public. In the month since it reopened more than 10,000 visitors have passed through its doors – up from 50,000 a year when it closed. De Lakenhal has impressed itself on the city once again. 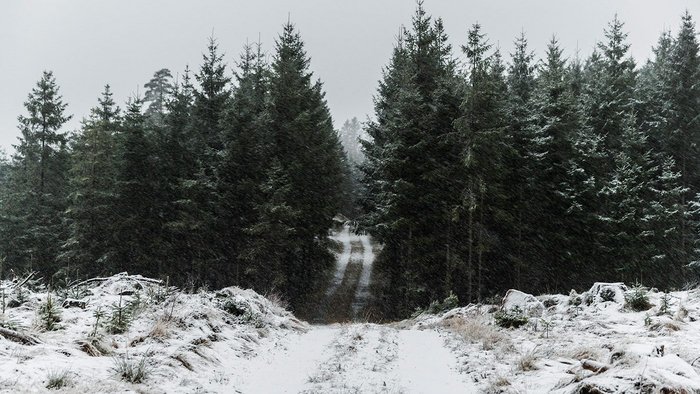