My recommendations include the always entertaining ‘glass half empty’ eco-grumblings of Zedfactory’s Bill Dunster at the ‘Zero Carbon by 2016?’ debate

If those that didn’t get a ticket to February’s RIBA Gold Medal presentation at Portland Place do nothing else at this year’s Ecobuild event, they should pop along to ExCel’s South Arena on 4 March from 3pm-4pm to hear doyen of architectural criticism Joseph Rykwert in conversation with Independent architecture critic Jay Merrick. Rykwert has been guiding thinking on criticism for over 50 years, and will here address the subject of private wealth vs. public realm – a particularly resonant theme in this part of London, where in the 1980s Olympia and York’s Canary Wharf almost single-handedly introduced the concept of privatised space into the public realm, and where the Olympic Park development represents a natural evolution of the thinking. I can’t wait.

The system of multiple drop-down tabs on Ecobuild’s website probably introduces an unnecessary level of complexity to proceedings, as does the introduction of ‘Core Content Zones’ to this year’s show – which could be understood as presenting sustainability as a categorised, rather than holistic approach. But personal niggles aside, it seems there’s much to engage the 44,000+ industry professionals expected to attend over the three days. At this, its 10th anniversary, the event’s seminar programme is strong – as usual – meaning that you’d be advised to check the conference schedule beforehand to make best use of your time.

My recommendations would be the High Speed rail discussion, with Imperial College’s feisty Professor John Polak on the panel; the ­always  entertaining ‘glass half empty’ eco-grumblings of Zedfactory’s Bill Dunster at the ‘Zero Carbon by 2016?’ debate; and the ‘Has the Green Deal sent the retrofit revolution into reverse?’ seminar. This last will be worth turning up to if only because there’ll be no government representation at all at the table. Knauf’s Jon Sinfield will be there however; vested interests or not, he seemed to be the only one actively speaking out on national media about the travesty of government downscaling of the Big Six energy companies’ ECO commitments recently. Compared to the overarching issue of upgrading our existing built stock, the 6% reduction in carbon emissions for new build homes demanded by the incoming Part L regs seems like fiddling while Rome burns! 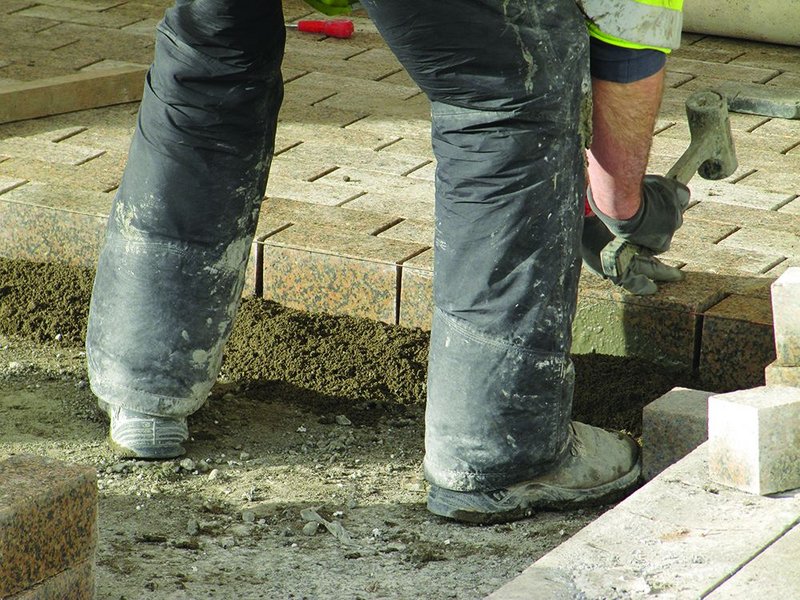 Construction products firm Instarmac is giving a new meaning to the term ‘walking on glass’ with  its ‘Ultrascape’ mortar paving system containing recycled glass. Compliant with BN7533, ensuring that installations have a minimum construction life of 40 years, it means the glass impregnated paviours are robust enough to take punishing daily loads of 1000 ‘standard axles a day’. Guns ’n’ Roses’ lead singer Mr Rose will be happy; god knows, with the number of TVs he’s thrown out of his hotel window in his time, he’ll be reassured to think the shards have been put to good use... 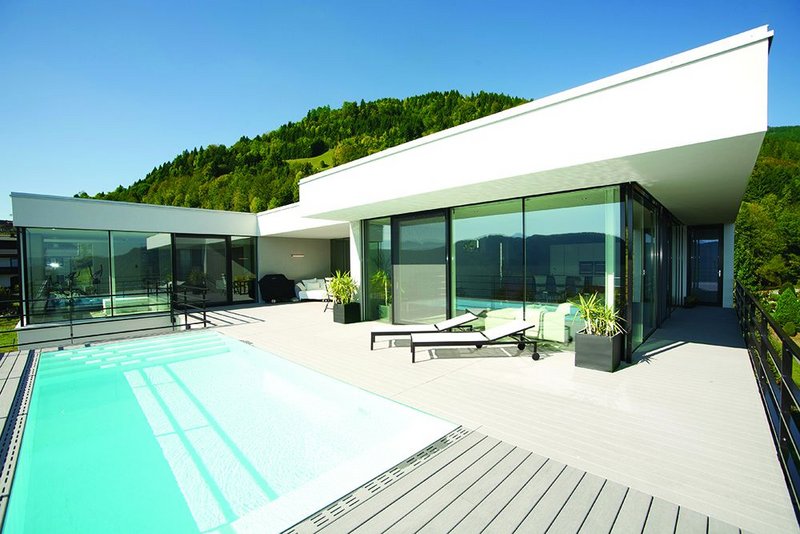 Think of Passive houses in the UK and you’re usually thinking of dealing with extremes of cold, so Internorm’s dangling of the carrot of a fancy modern Mediterranean home on its press release in our drenched midwinter is something of a cold comfort...but not without reason! Internorm’s new timber and aluminium ranges offer U values of 0.63W/m2K, which works either side of the glass. The new ‘I-Tec Shading’ is a self-powered solar blind, preventing solar gains in those envy-inducing climes, and along with its ‘I-Tec Ventilation’, aims to keep a home’s jet-set occupants even cooler. 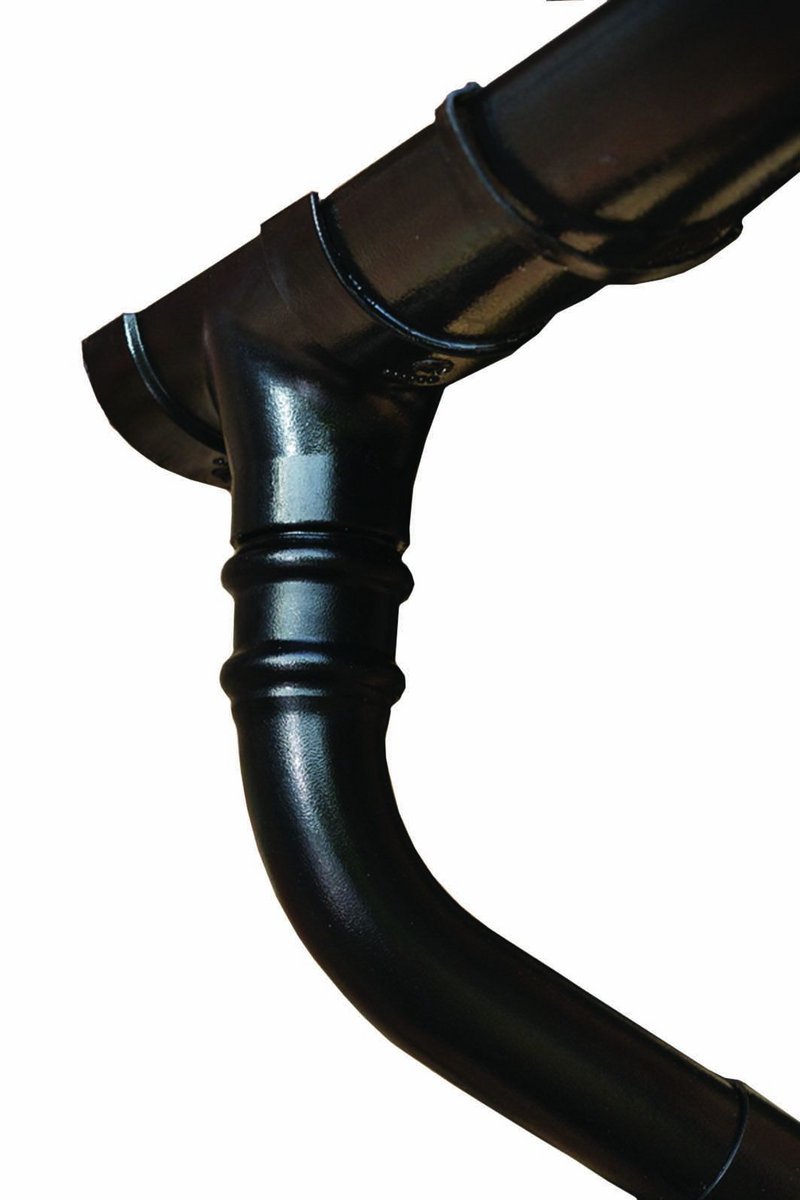 With Bazalgette’s Victorian sewers unable to deal with run-off from the capital’s streets, we must be crying out for the mooted 21st century superdrain running beneath the Thames- proving true the maxim that no-one cares about drainage until it doesn’t work. Alutec is dealing with the problem from both chronological ends. It’s  launching its new 76mm Tudor downpipe, an aluminium version of the classic black Victorian cast iron ones – and in 20 colours. If that isn’t modern enough, you’ll be able to specify them in 3D too, as they’re all included in Alutec’s high-tech BIM components library. 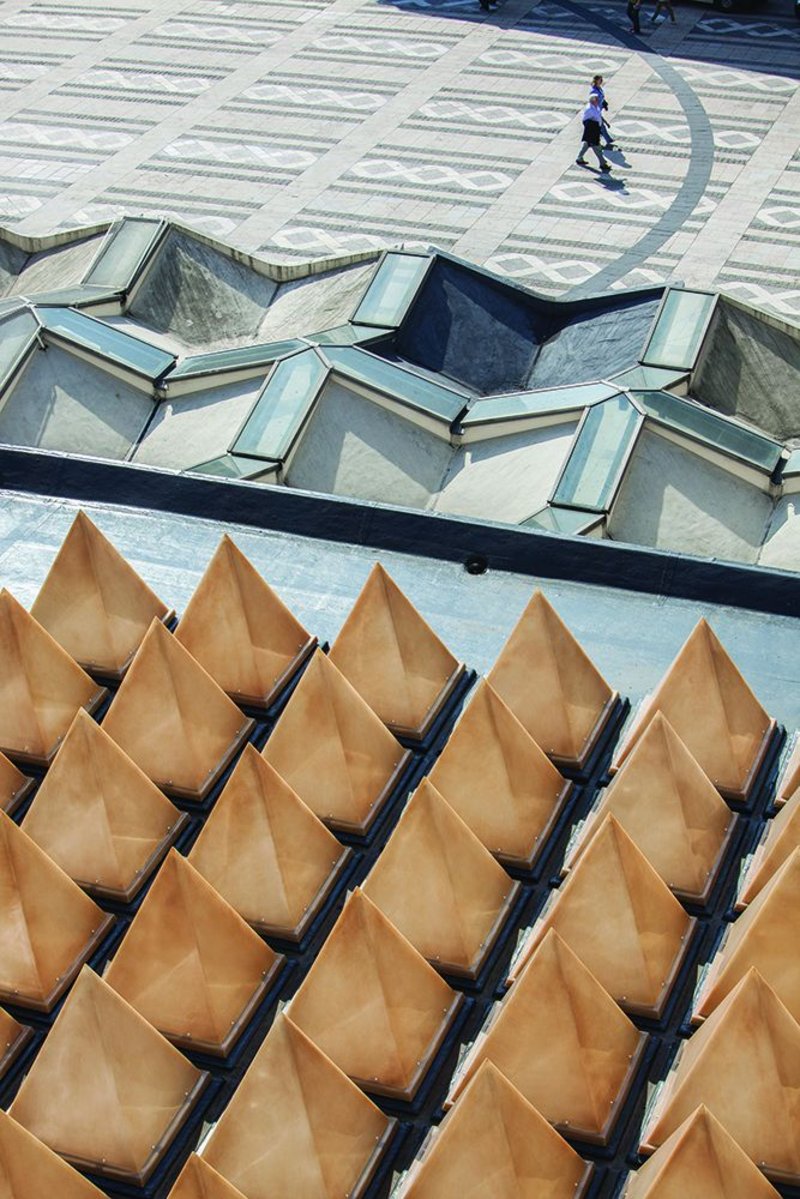 It looks like diligence, patience and kemperance is the motto at the ancient City of London, where the crenellated 1960s elevation of its Business Library is now topped off with the firm’s Kemperol 2K-PUR, as part of the Phase II refurbishment of the building’s west wing – done on time in six weeks. And, it seems, the imaginary  Company of Glassfibre Makers is involved, with 25% of its non-woven reinforcement fleece made from recycled bottle content. The firm is also showcasing its Kempergro Green Roof system, allowing those glass fibre sheep to glaze...I mean, graze.