What can be done to encourage steel reuse? Pamela Buxton looks at the potential of integrating steel into a circular economy 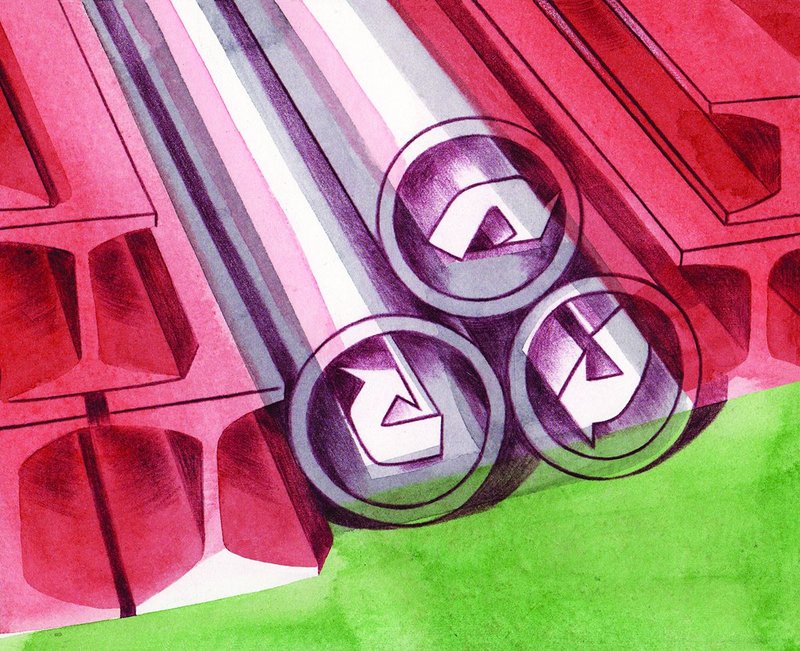 As construction begins to engage with the circular economy principles of promoting resource productivity and reducing waste, what are the implications for steel?

Steel recycling, as distinct from reuse, is well established, with some 95% of steel sections currently recycled into products of equivalent or higher quality. Reuse, how ever, optimises whole life resource efficiency further by exploiting steel’s inherent ability to be reused. But what are the barriers to this? And what can be done to encourage all participants, from steel producer and architect through to developer and end-user, to embrace this way forward?

The Steel Construction Institute (SCI) and Cambridge University are exploring the development of a portal for steel reuse as one of a number of ongoing research projects tackling the reuse of this and other construction materials. Last summer the Circular Building, built from steel and other fully reusable components was showcased at the London Design Festival as a prototype for reusable buildings.

‘The circular economy agenda is coming to the fore now and has given steel reuse impetus,’ says Dr Michael Sansom, associate director of the SCI, which is also leading the EU research project REDUCE (Reuse and demountability using steel structures and the circular economy). This three and a half year initiative aims to encourage steel reuse by promoting design for deconstruction with advice on connection systems and greater standardisation of design.

According to Dr Sansom, while the environmental case for reuse is very clear, SCI research found that currently just 5% of steel sections are reused compared with the remainder of sections that are traditionally recycled. Both options, however, avoid the downcycling or incineration fate of many other construction materials.

‘The idea of reclamation and reuse is not common practice and many organisations don’t have the experience and skills to do it,’ he says.

The SCI/Cambridge University research analysed the barriers to greater steel reuse such as access to the right type and amount of certifiable steel when required, and the cost, quality and programme implications of reusing steel. It found that there was often a disconnect between the perceived problems and reality.

‘There’s sometimes a perception that reused steel is somehow inferior,’ says Sansom. ‘As long as steelwork isn’t severely damaged by fire, there’s absolutely no reason why it couldn’t be reused.’

A portal for reusing steel could tackle many of the issues around accessing reused steel. Demolition contractors could post details of steelwork from buildings they’re working on for interested designers, contractors and developers to view and ultimately buy.

‘It’s very challenging for designers,’ says Sansom. ‘If they want to reuse steel they have to find the right section sizes in the right volumes and at the right location. This would be much easier if there were a bigger market with better availability.’

As well as providing access to reused steel, the portal could also make provision for future use by building a database of BIM structural steel models of new buildings, with each piece of steel and its CE marking identifiable. While this information is already available for CE marked buildings, a database would ensure it was available to future owners. This would make reuse more economically viable by removing the need for testing, since the model can provide the necessary data to ensure that those sourcing reused steel could be confident that it had the properties they require.

Several other initiatives are looking at this important issue of information, which is key to boosting steel reuse from the thousands of buildings that are demolished each year in the UK.

One of these is the Buildings as Materials Banks (BAMB) pan-European project, led in the UK led by BRE and BAM Group. This initiative proposes a Design Protocol for Dynamic & Circular Buildings to make sure buildings are designed to be easy to deconstruct. It is also exploring electronic materials passports as a one-stop shop for capturing material and performance information that will make it easier for developers, managers and renovators to choose circular building materials.

‘If that’s captured in a model or a passport, then in 20, 60 or even 100 years’ time an engineer or architect will be able to look at that steel and know what stresses it’s been under and have full confidence in knowing how it can be used in the future,’ says Nitesh Magdani, group sustainability director at Royal BAM Group, who hopes this will help address the current hesitancy to consider reused materials.

There’s sometimes a perception that reused steel is somehow inferior. As long as steelwork isn’t severely damaged by fire, there’s absolutely no reason why it couldn’t be reused

BAM has explored circular economy approaches on several projects, including the Circular Building designed with Arup and constructed last year at the Building Centre in London (see below). It is currently setting up a database as a platform to assist circular building processes.

‘Hopefully in 20 years’ time we’ll have a marketplace ready to deliver products that have been used already,’ says Magdani, adding that more needs to be done to incentivise CE practices.

These issues are just part of a complex picture according to Arup principal consultant Kristian Steele, who has been looking into steel reuse as part of the firm’s engagement with the circular economy.

‘Circular economy is an area of strategic importance to Arup. It’s something we need to be at the sharp end of,’ he says, adding that at the moment the market doesn’t have all the solutions for that agenda.

‘Over time these things will come forward. Reuse is a useful strategy – although just one among many for achieving greater circularity – and in particular applications I think it has the potential to be applied more,’ he says. ‘The research shows that designing for reuse is a potential solution for reducing carbon emissions.’

According to Steele, reuse starts with enabling easy and cost-effective deconstruction. This requires a minimum number of fixings which can be removed mechanically. A simple, standardised structure would also help, as well as a tagging system that identifies steelwork properties both virtually through the BIM Model and physically – a method already embraced by some in the shipping industry. Steele also suggests that disassembly plans should be mandatory for all buildings as an easy way of recording the necessary information to enable a circular economy approach.

The creation of a steel reuse portal and the outcomes of other research such as advances in information tracking will undoubtedly make reuse more practical. But without carbon taxation or legal requirements there isn’t a simple way of making it widespread – yet – according to SCI’s Dr Sansom.

He suspects that a major step change in business model – as radical as that delivered by Uber and Airbnb in their industries – will also be needed to make this happen.

‘All technical barriers are surmountable. It’s just a case of whether there’s suffcient drive, economic or otherwise, to make it happen.’

By exploring the BIM-spurred potential for information tagging and the feasibility of a steel reuse portal, he is hopeful the steel industry will be in a good place when reuse does become viable on a larger scale.

‘Its time will come. It makes sense for us to do the right thing and plan for it now,’ says Sansom. ‘Steel’s doing brilliantly in the recycling loop. We’re now trying to go to the next level.’ 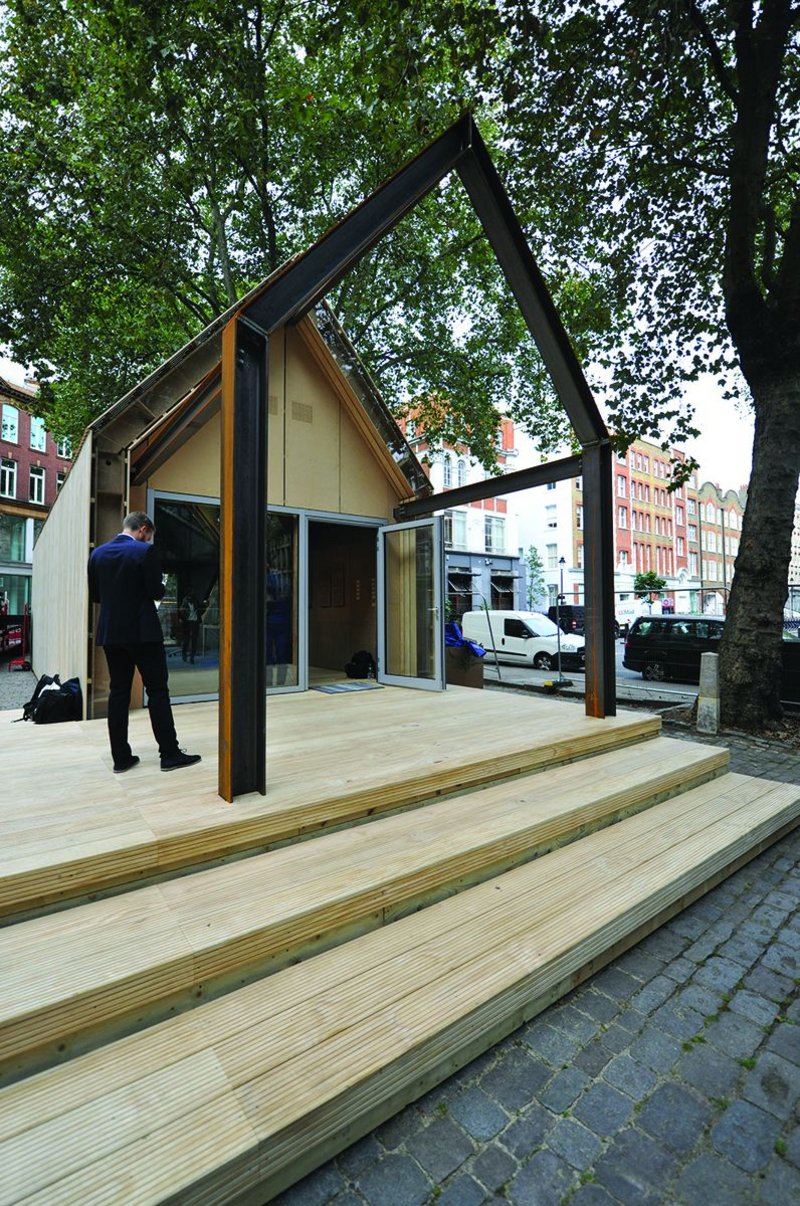 The Circular Building was erected in the forecourt of the Building Centre in London recently to demonstrate the potential for reusing building products. Delivered by a team including BAM Construct UK, Arup and the Building Environment Trust, the steel-framed prototype uses digital technology to tag all items with a code containing the necessary information to allow it to be reused.