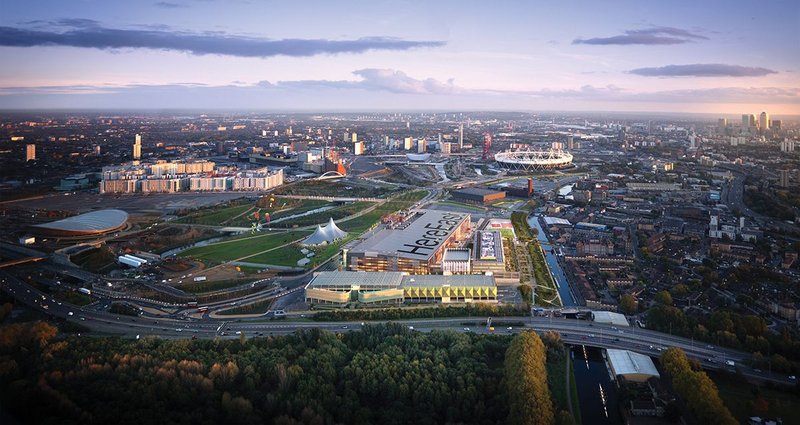 Visualisation of the Olympic Park, looking south past Here East in the foreground.

Since the Queen Elizabeth Olympic Park switched into legacy mode three years ago, the challenge for architects, typologically speaking, had been straightforward – except perhaps for the International Broadcast Centre. A major concern was what to do with the gigantic bulk of the largest building of the Media Centre complex, at the Hackney Wick corner of the Olympic Park. At 280m long and 120m wide, the steel-framed structure was easily large enough to house the One Canada Square tower laid on its side, or six jumbo jets, yet was no more than a giant shed with no discernible identity or visual flair.

Facades were windowless, a result of the building being crammed with TV recording studios in Games mode, and of basic steel composite cladding. In addition, an unsightly gantry frame, supporting several tonnes of aircon equipment, extended across its rear.

Architect Hawkins\Brown had the unenviable task of reinventing the structure as an attractive commercial office block and the central focus of the £100m redevelopment of the Media Centre site. Known as Here East, it includes the former press centre and the former media conference room. Developer iCITY, a company owned by clients of Delancey, a specialist real estate investment and advisory company, wanted to fill the scheme with a mix of tech firms and small-scale artists and creatives, many from the local area, as part of the wider regeneration of the region.

Delancey project director Richard Palmer comments: ‘Our brief was to take this big box and make it vibrant and attractive to the creative sector. Hackney Wick has the highest density of fine artists in Europe, and there is the huge east London tech scene to tap into. The original design just wasn’t delivering what we wanted, we needed a creative injection, so we went out to design competition and Hawkins\Brown came up with a great proposal.’

The architect created the simple concept of a ‘crust’ and a ‘core’ to break down the building’s bulk. A 16m-deep perimeter crust aims to maximise daylight, ventilation and views, with the existing cladding stripped off and replaced with a double glazed unitised curtain walling system. The crust surrounds a central core, containing spaces for tenants needing no natural light, such as the Infinity data centre and UCL’s Bartlett School and departments of engineering and robotics. 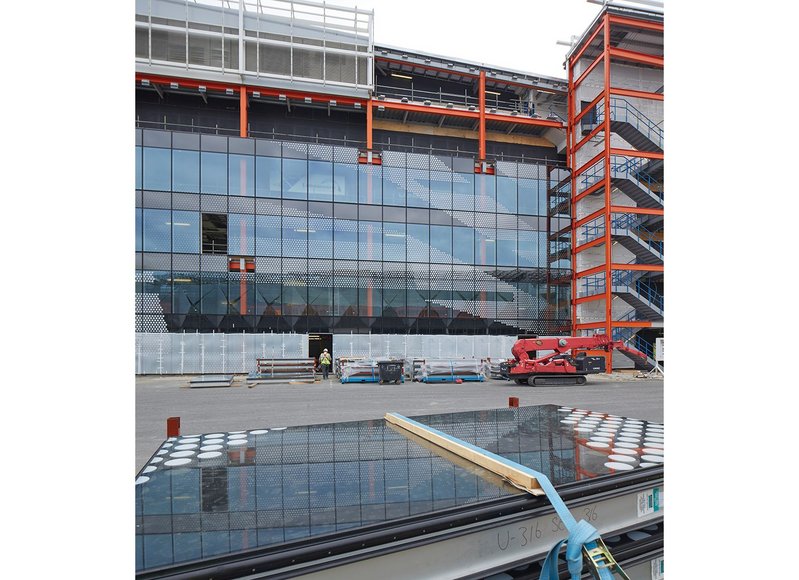 East elevation of Here East during construction, showing the pixellated unitised cladding of the facade. Over time, this will be modified again by the WikiHouse timber system installed in front of it

Around 3,000 unique panels of unitised glazed curtain walling, weighing a total 450 tonnes, cover the south, west and east elevations, and are key to adding visual excitement and breaking the facade down into readable sections. The glass is printed with a complex digital frit pattern, made up of over eight million ceramic dots, and dots-within-dots, which cascade diagonally across the facades at different angles, creating a comic-like effect reminiscent of works by the artist Roy Lichtenstein.

The design was in fact inspired by a British artist, Norman Wilkinson, inventor of the dazzle pattern camouflage used to protect battleships during World War I. Rather than conceal a ship from view, a dazzle pattern used bold shapes and violent contrasts of colour to confuse the enemy, making it difficult to discern the type of battleship – and so the level of threat.

The perspective of the sloping dotted lines draws the viewer’s eye towards the locations of three themed main entrance atriums along the west facade, known as the steel mill, the timber yard and the fabric factory, a nod to the factories and warehouses that once occupied the site. Jennifer Dooner, architect at Hawkins\Brown comments: ‘The concept was to unpeel the existing cladding and expose this homogenous sealed box to its true industrial and contextual heritage, opening it up to create both physical routes through it and views that connect it to the other buildings on the site.’

Each entrance is marked by a giant immovable 9m-wide steel louvred hangar door and large orange letter. The vibrant colour, another military reference inspired by the interior lining of reversible flight jackets, is also applied to the exposed steel frame, clearly visible behind the glass. ‘We loved the idea of the crust being like an ant farm, or a platform video game, where you can see lots of scurrying activity going on behind the glass,’ Dooner adds.

This effect will be most apparent on the east elevation, where the gantry structure has been retained and, similar to a ‘cabinet of curiosities’, will be populated with creative studio spaces made of timber using the WikiHouse open source building system. The ant farm effect is already visible inside the offices of BT Sport – iCity’s anchor tenant, which has occupied about a fifth of the building for the two years or so since the project began – where researchers can be seen walking between banks of TV screens and desks on a main floor and mezzanine level. 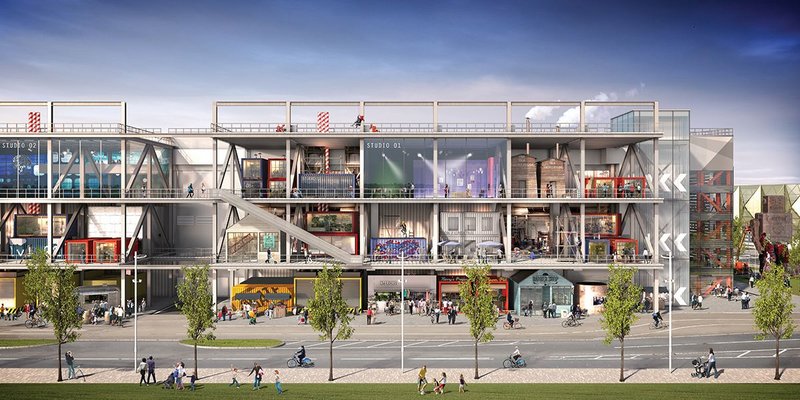 An army of apprentices from local boroughs will be drafted in to build the studios within the gantry structure, using the WikiHouse timber building system. Tenants will help with the design.

An advanced digital Diptech printer, a massive laser printer measuring 2,600mm by 3,700mm, was used by Polish glazing manufacturer Press Glass to print the ceramic frit pattern on the curtain wall glazing. The technique is much faster than traditional screen printing, which would have required thousands of individual printing templates, says Martin Saltern, project manager at cladding subcontractor Lakesmere: ‘It’s never been done on this scale, using this size of machine to create a continuous pattern that flows across the whole building surface. Every panel has an individual reference in the corner so it can be reproduced from a digital archive in future.’

Hawkins\Brown and Lakesmere had to spend many hours preparing and checking 2D pattern drawings for each glazing panel in AutoCAD, even tweaking the designs to accommodate 20mm silicon joints between panels so that the dots appear to run uninterrupted across the facade. Each unitised cladding panel features two panes of heat strengthened laminate glazing, comprising a total eight laminate sheets. The ceramic frit is printed on the external sheet’s inner face, and a layer of solar coating, to reduce solar gain and improve the performance of the glass, is applied to face four.

The density and location of the frit pattern responds to solar gain requirements, dependent on the interior use and orientation on the building and calculated using Grasshopper parametric modelling software. On the shadier north side the pattern is less dense, increasing on the west and south. Here East is designed to BREEAM ‘Excellent’: clear cladding panels have a U-value of 1.0 W/m2K, and spandrel panels, with black opaque glass, insulation and metal panel inner face, a U-value of 0.385 W/m2K.

The design team considered printing the ceramic on the surface of the glass, which would have added texture, but the sheer density and volume of printing, and a lack of test data proving the expected lifespan, made this impossible for manufacturers to warranty, says Dooner.Concerns that office workers might go mad staring at dots all day led to the insertion of a ‘vision band’ at seating height to enable people sitting at desks in office spaces to see out through clear glass. The digital pattern was omitted entirely at ground floor for retailers’ displays.

With over half of the curtain walling now installed, Here East is already a vast improvement on the generic white blob it replaces. In different lights and at different times of year the cladding creates different effects: the early morning sun creates a crisp contrast between white spots and a black background, and at dusk the effect is reversed as backlight from the building’s interior casts the spots in shadow. Palmer describes the moment the protective temporary wall was peeled back from BT Sport’s offices to allow in daylight: ‘Imagine what it was like for them working in a sealed box for two and a half years, then suddenly having a vista out, it was like moles squinting at the sunlight. To celebrate the moment BT Sport’s MD gave everyone sunglasses.’