DVVT imagined the lives of patients and residents for Kapelleveld care home, which is designed to stimulate occupants to help make them stronger 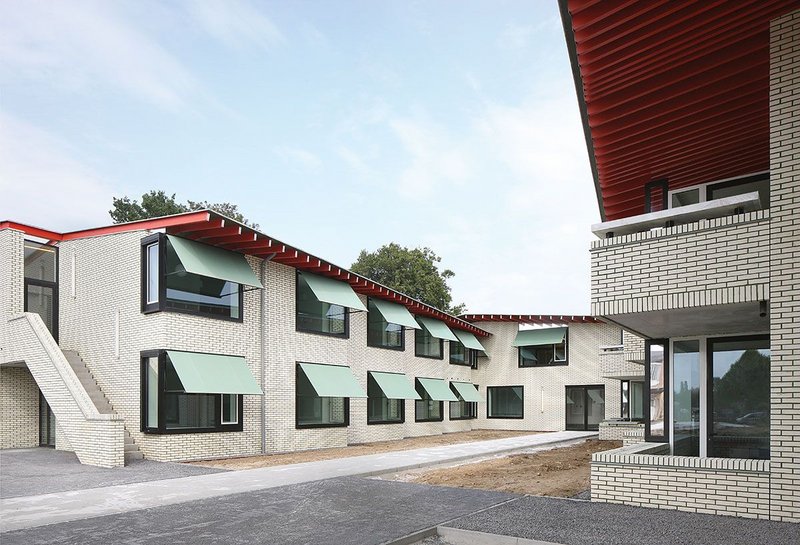 In 2008 artist partnership Arakawa and Madelin Gins’ Reversible Destiny Foundation set up a test case art/architecture project in East Hampton, New York, that proffered an alternative response to the accepted thinking that architecture should necessarily consider and take account of increasing infirmity. Quite the opposite in fact. The Bioscleave House, with its perverse sloped living room floors with vertical grab poles, sunken kitchen and bizarre-shaped dining area actively forced its elderly residents to negotiate the territory of the home, offering them no quarter or concession. This, they argued, helped its occupants to remain what they termed ‘tentative’; forcing body and senses to adapt and strengthen over time, stimulated by the effect of their ‘Life Extending Villa.’

To a less polarised degree, that’s what’s going on at the semi-rural suburb of Ternat on the outskirts of Brussels, where Flemish architect De Vylder Vinck Taillieu’s (DVVT) 8,300m² Kapelleveld home for 60 dementia care patients and 40 independent elderly residents challenges as much as it accommodates them. It might be working in the contemporary idiom but the firm has proved itself maestro of baroque perspectival plays and smoke and mirrors games, as evidenced by its Linkeroever social housing (PIP Nov/Dec 2013) and Vos House (PIP Jan/Feb 2015), both in Antwerp. In the grand spatial moves and finer detailing here, the firm has consolidated this approach. Highly considered yet playful, everything in this project merits a closer look; something belied perhaps by the deceptively prosaic nature of Filip Dujardin’s photography of the yet-to-be occupied facility.

Put the strangeness of Kapelleveld’s plan aside for a moment. DVVT partner Jo Taillieu emphasises that the building’s final form was never the primary concern; everything, he says, was driven by ‘sense of the people occupying it; the scale of a table or bed’. For instance, it was the desire to imagine what it might be like to spend increasingly protracted times supine, combined with the observations in the seminal 1977 text ‘A Pattern Language’, that led to the introduction of the bed-level dual aspect windows of the dementia care rooms, allowing each one a wider field of view. Of course, enjoyment of the view could only be possible if rooms staggered relative to each other; and this they did, resulting in the four Catherine wheel spikes in plan that obliquely fire out from the central fulcrum of their communal living/dining spaces.

And with no reason to be different, each room is therefore the same size. Its square bathroom space demarcated in white ceramic tiles one quarter the size of the green ones in the bedrooms, the floor module might have changed but the same games are being played. The dual aspect windows here become double butted mirrors that wrap around the sink vanity area and wall; revealed when timber sliding doors are opened. Large ceramic ball pendants in bedrooms translate to smaller wall mounted ones in bathrooms; each emergency pull cord a plumb line terminated with a complementary, grabbable red snooker ball. 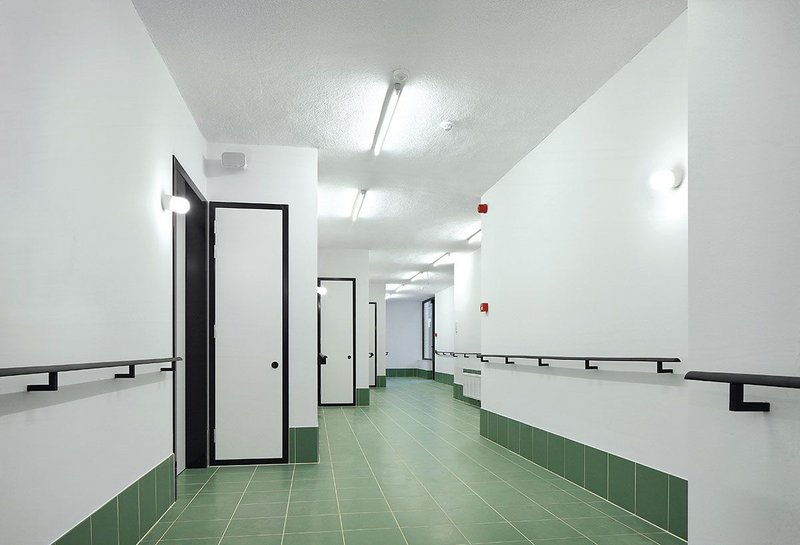 The staggered elevation is echoed inside, giving a partially sheltered entrance area to every room along the corridor. High contrast floors and frames help orientate the partially sighted. Seats at the end of corridors allow residents to enjoy views out. Credit: Filip Dujardin

The windows that frame views to the semi- rural landscape are a story in themselves. Taillieu talks of the conditions that precipitated the bespoke modification of a standard aluminium section to better meet the users’ needs. With all windows facing east/west the glass required shading but horizontal blinds was eschewed to retain the openness of the glazing to the view. Instead, rebated into the outer frame and attached to a mechanical elbow, a simple green fabric blind unfurls to shield the worst of the sun. Formally sharp against the cream brick facade, the blinds reference the solid hoods on John Hejduk’s 1984 IBA housing tower in Kreuzberg, Berlin. But against this almost primitivist statement, there’s built-in sophistication; the side light has an actuator that draws down a mosquito screen, allowing windows to vent, bug free. That way, says Taillieu, modified standard sections kept costs down and glazing is only ever obscured out of necessity.

And so from the detail, the whole. It’s the collective saw-like forms of the windows that generate the final plan, dementia care bedrooms and spaces forming an ‘X’ over the building’s central spine, the one bed retirement apartments the longer ‘S’. This relative shift is important internally too. While dementia patients have a short walk towards a big window and small seating area at the end of each arm, the stagger makes a semi-private space at the threshold to each room where patients can stand and receive guests without being fully in the corridor proper. On plan it might look inconsequential but in reality it’s a palpably defensible space.

Legibility is also considered here. Black skirtings merge into black door reveals, helping the partially sighted navigate corridors. Black door handles contrast with white laminated doors. Even the principles of camouflage have been employed. White handles on white doors for staff are effectively invisible for those who shouldn’t be trying them.

Retirement apartments too benefit from the stagger; though here it’s externally. From outside their ‘L’ shaped living and bedroom glazed walls, balconies are shielded from each other, making incidental visual connection between adjacent flats possible but not prescribed; giving elderly residents control over their level of privacy or engagement. Both details, Taillieu argues, respect individuals’ dignity.

But perhaps it’s the view from the windows that provides the ultimate proof of the ways that architects might stimulate even the most sedentary of bodies and minds, most created by the resolution of the geometries they acquired for the building. The strange scale illusion that occurs, the result of the 0.5m drop across the site from north to south, makes the view north look like a baroque perspectival trick; so too the bizarre overhang of the roof, supported by bright red painted timber struts whose spacings were engineered to change according to the loads imposed on them. Note too the mirrored stainless steel fascia plates where they attach back to the concrete structure. These complement those above the glazed doors of the elderly apartments, both creating an illusory, ‘non-being’ quality to the building that defies interrogation.

Now by conventional thinking, those camouflaged handles, mirrored plates, the alignment of lighting at odds to the staggered internal corridors, strange perspectival views; all would sit at odds with the notion of accounting for increasing dementia, but that is not how DVVT saw it. Taillieu says it was about the maintenance of a minimum standard of independence for residents; to create spaces that obviously considered their needs but then offered layers of sensory experience that only registered through occupation and long term exposure. It took as a starting point a life that might be spent more observing in stillness but it chooses to challenge that act of observing. And so at Kapelleveld the firm provides details that resonate throughout the building, to accentuate its perspectives with trompe l’oeil views from windows and to confound expectation with illusory uses of reflection. Both Arakawa and Madelin Gins might have submitted to their destinies but were they still ‘tentative’; one imagines they would be happily so here.