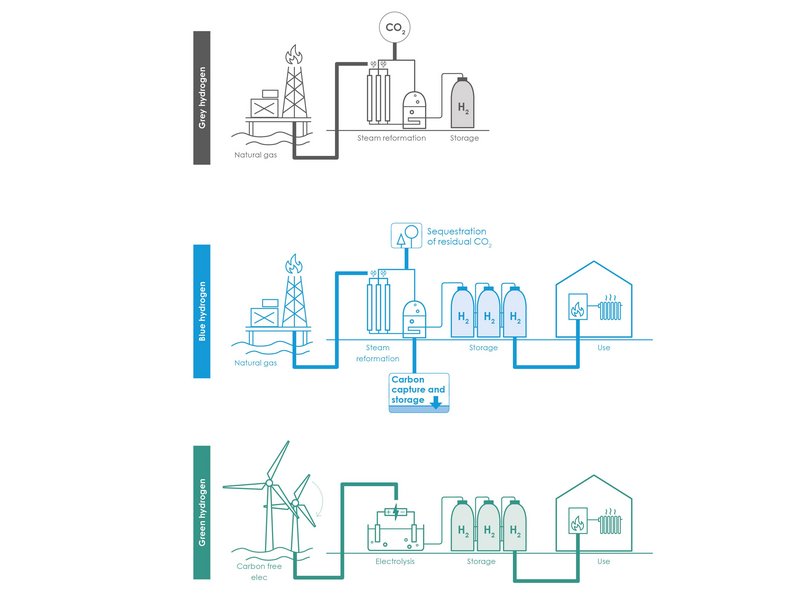 The distinctions of Grey, Blue and Green Hydrogen. Credit: LETI-Hydrogen

Any ideas that hydrogen will play a key role in the UK’s transition to net zero has been thrown into doubt in a damning new report by the London Energy Transformation Initiative (LETI).

The holistic study examines the likelihood of hydrogen becoming a means of heat delivery for buildings – which are the single biggest source of national greenhouse gas emissions, making up 37% of CO2 output.

It concludes that zero carbon hydrogen, supplied via a re-purposed gas mains network, ‘is unlikely to become available, for the vast majority of buildings, for the foreseeable future’.

Major obstacles to the viability of the fuel include the fact the UK gas supply industry currently advocates 'Blue' hydrogen, which unlike zero carbon ‘Green’ hydrogen, is manufactured from methane and relies on unproven carbon capture and storage technology to absorb the high emissions.

Hydrogen conversion, delivery and combustion has a relatively low efficiency of between a third and one sixth of alternatives. The report states: ‘When blue hydrogen, supplied via the gas network, is compared to the use of heat pumps there is a stark difference in efficiencies. Begging the question: why consider or pursue hydrogen for the heating of UK homes?’

The perceived hassle of upgrades to pipework, boilers and gas hobs etc, and a lack of tangible benefits for building occupier/owners, is another area of concern highlighted by the report.

Chris Twinn, lead author of the report and principal at consultancy Twinn Sustainability Innovation, says: ‘Converting all buildings is going to be a real problem because most people won't see any benefit in changing over to hydrogen. Compared with the switchover to natural gas in the late-70s, most pipework today is concealed, we have fitted kitchens, and there's a vastly increased range of appliances to convert with literally hundreds of types of hob alone.’

Changing over to hydrogen means simultaneously flicking on the switch across whole regions because the pipework either has hydrogen inside, or gas 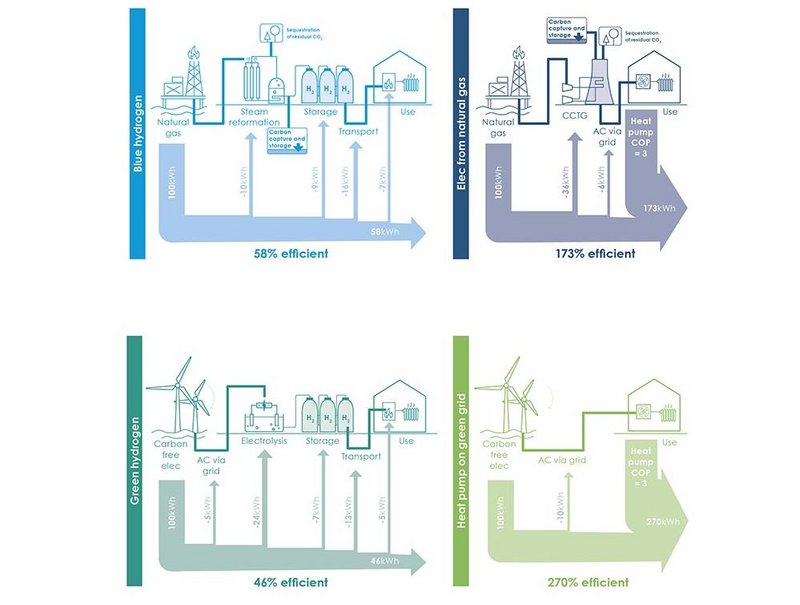 It also remains unclear who should guarantee and accept liabilities for the in-building gas pipework switchover, with a lack of proposals on the table, says the report. Furthermore, the cost of a second major overhaul of UK energy system infrastructure, in addition to the decarbonisation of the electricity grid, is difficult to justify given the ‘significant risk of re-purposing the gas grid using new unproven technology at scale’.

Other experts in the building services sector have questioned the benefits of hydrogen for zero carbon heating. Last November Jon Gregg, associate for sustainability at Buro Happold, told RIBAJ: ‘We need to make an impact on decarbonising heat immediately, and hydrogen is not in a position where we can start rolling it out at a large scale.’

Gwilym Still, Passivhaus leader at Max Fordham, said: ‘We're a bit sceptical about the degree to which hydrogen is going to penetrate the market and come in and save the day. With current boilers, you can replace up to 20% of natural gas with hydrogen and beyond that you have to fundamentally replace the kit.’

However, the government appears to be backing the technology for the time being. Its Ten Point Plan for a Green Industrial Revolution, published in November, includes up to £500 million to create entire ‘hydrogen neighbourhoods’ and even a ‘hydrogen town’ by the end of the decade, as part of the transition to net zero carbon.

The UK’s first homes to be fitted with boilers and hobs that run on hydrogen will be built in Gateshead by April under a scheme intended to offer the public a glimpse into ‘the potential home of the future’.

According to Twinn, the future is really about electric heat pumps, which offer the opportunity for a more incremental switchover from gas. ‘Changing over to hydrogen means simultaneously flicking on the switch across whole regions because the pipework either has hydrogen inside, or gas. Heat pumps [which run on the electricity grid] are more about a progression; the technology might only come slowly, including the smart controls, and initially we won’t have enough people to install them, but at least we can roll them out progressively, whereas a gas to hydrogen switchover means doing a whole area at a time,’ he concludes.