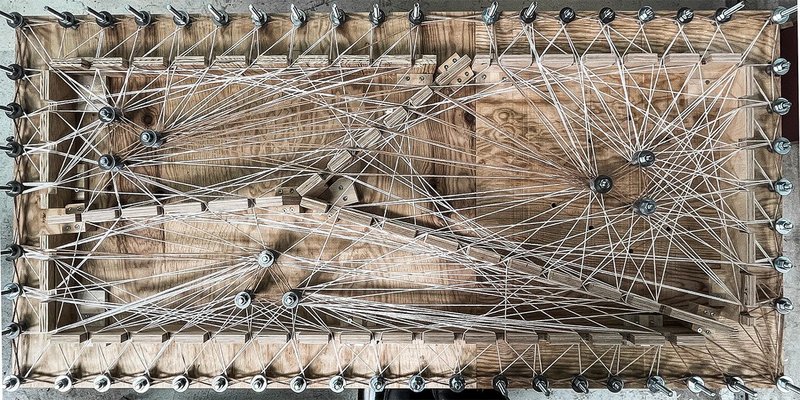 A robotically-wound flax fibre construction system, developed to optimise material efficiency in architectural components, is one of three full-scale prototypes on show at a new exhibition on digital fabrication and bio-based materials.

Universities in Spain, Germany and Denmark collaborated with industry partners on the 18-month research programme, run by The Aedes Metropolitan Laboratory and funded by the innovation programme Zukunft Bau on behalf of the German Ministry for Housing, Urban Development and Building.

Each developed construction systems using earth, flax fibre and bioplastics which were combined for the exhibition into a single 1:1 scale installation built around the floorplan of a typical 1-bedroom apartment.

The flax fibre-winding system created by the University of Stuttgart’s Institute of Building Structures and Structural Design (ITKE) and Industry partner FibR was used for the apartment’s two lightweight hybrid timber/natural fibre slabs. 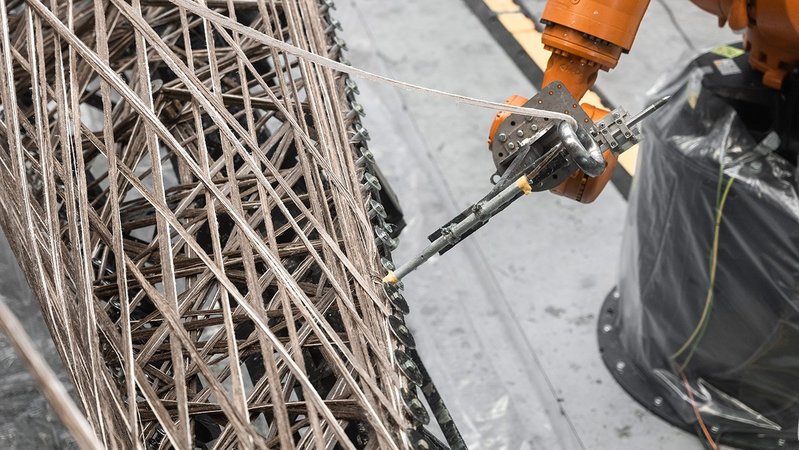 The slabs are 4m long by 2m wide, weigh around 200kg and feature a network of flax fibres strung across a 19mm-thick three-layer timber plate. They are point-supported on four 3D-printed earth walls developed by fellow researchers from Barcelona’s Institute for Advanced Architecture of Catalonia and Italian company WASP.

Initial research and testing of the hybrid structure for the slabs focussed on the flax material build-up and the structural performance of natural fibres impregnated with different bio-based resins. Star-shaped specimens were developed to test the mechanical properties of the system.

The structure and material interfaces were honed further, using computational design to maximise the use and distribution of fibres under tension and to optimise the use of material to ensure efficient use of resources in construction.

FibR’s ‘coreless’ robotic filament winding process exploits a Kuka six-axis robot with a specially adapted head to stretch the pre-wound flax between different nodes on a structure. This enables a spatially complex, load-adaptive, arrangement of filaments.

Researchers concluded that, based on the performance of the final prototype, the high level of adaptability of the fibre system makes it possible to mass-customise slabs to meet varying supporting conditions.

A range of potential applications in buildings are being investigated, said Tzu-Ying Chen, a doctoral researcher at ITKE: ‘Natural flax coreless filament winding creates structures that are both lightweight and strong. With such properties, research is exploring the use of this technique in creating structural elements such as slabs, columns and long-span beams. The lighter the self-weight of a structural element, the higher the efficiency of the material usage.’

According to Chen, further research is also required to understand the structural predictability of bio architecture. ‘As the system gets lighter, serviceability requirements such as acoustic integration become another crucial yet challenging aspect to address,’ she added.

Apart from the walls and slabs, the apartment prototype features a series of room-height bio-based screens that function as space dividers. These were 3D printed by Copenhagen’s Centre for Information Technology and Architecture and Danish company COBOD from a cellulose and Xanthan-based slurry.