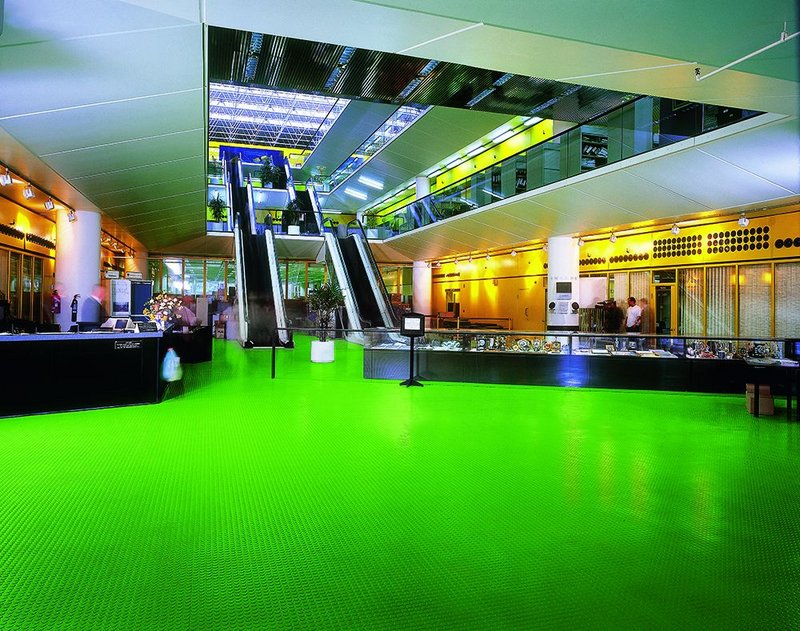 Technology transfer has many quirky manifestations. Take nora – it’s one of the world’s largest rubber floor manufacturers, yet started out making shoe soles, pulling itself out of the ashes of a bombed-out post-war industrial base.

‘The cost of leather after the war was prohibitive, so in 1949 the firm started looking at the production of rubber to use as a substitute,’ says Carsten Klever, production manager at nora. He explains that while developing its synthetic rubber recipe, the small town of Weinheim in Germany, where the firm’s still based, was partly populated by 20 ‘testers’, whose job it was to wear and wear out the shoes, to ascertain the most resilient compounds. In a stroke of genius, some bright spark at the time caused the step-change (so to speak) in the firm’s fortunes, by suggesting that the rubber move off the sole of the shoe and onto the floor – and nora the rubber flooring company was born. Since then, the firm’s workforce of 1,100 has created an annual flooring turnover of over €200m – although 10% of the firm’s output is still rubber soles.

It was a very different world then. Without a global transportation network to access Far East markets for the real thing, nora created its rubber synthetically. Dictated more by utility than fashion, the dyes, explains Klever, were produced from coal by-products, so it was dirty work creating the brown and grey flooring that nora first sold in bulk to American occupying forces in the nearby city of Heidelberg. How times have changed – all its ‘norament’ tiles and ‘noraplan’ rolls now have ‘Blue Angel’ accreditation both for the low emissivity of the product and the low volatile organic compounds (VOC) used to bond it to the floor. And when its lurid green ‘Pastille’ design was specified by Norman Foster on his Willis Faber & Dumas building in 1975, (even now it’s called ‘Ipswich Green’ in its honour) nora’s rubber floor moved beyond the realm of mere fashion to design classic.

And nora’s still selling well to the Americans – PR manager Doris Lierz explains that this is now the firm’s biggest market, with a strong showing in the healthcare, education and transport sectors. This could be due to the product’s homogenous nature, which gives it a particular durability. Lierz points to one of the 80,000m2 of black Pastille tiles fitted at Frankfurt airport in 1969. Cleaned and installed like a museum piece in the firm’s factory showroom, over 40 years later there’s little sign of wear to its heavily trafficked surface.

Now the firm is exporting globally, you’d think that there would be advantages in localised production, but Klever says not. ‘Holding the whole world’s production in this one factory does have its advantages’, he explains. ‘Here, we can exercise high levels of quality control, and perform R&D on our product lines using the associated Freudenberg Laboratories, which have state of the art materials research facilities almost on site – these are effectively our USP in a very competitive market,’ he adds. That said, the firm has distribution facilities in the USA, Shanghai and the UAE, and has just opened another in Chile, cementing its intention to reduce lead-in times across the world.

You can see that nora is not sitting on the laurels of its Pastille range – the showroom is choc-a-bloc with its new ranges – unita, crossline and sentica mimic the look and feel of natural materials but their bright, clashing colours could almost have come straight out of Ettore Sottsass’ Memphis atelier in the 80s. The unita, which has a carborundum-like sparkle created by the addition of tiny flakes of granite, recently won a Red Dot design award. The firm hopes that the breadth of the ranges will strike a chord with its global clientele – nora is not only monitoring how ranges are specified to help it pick up on specification trends, it’s also attempting to set them by employing colour consultants to advise on future spectral possibilities.

It sounds trite, but colour selection is another important specification choice along with the obvious slip resistance and durability. But unlike these decisions, colour choice can seem counter-intuitive, says Klever, adding, ‘For a communist country, it’s strange that China really likes blue’. Counter-intuitive? Perhaps prophetic... 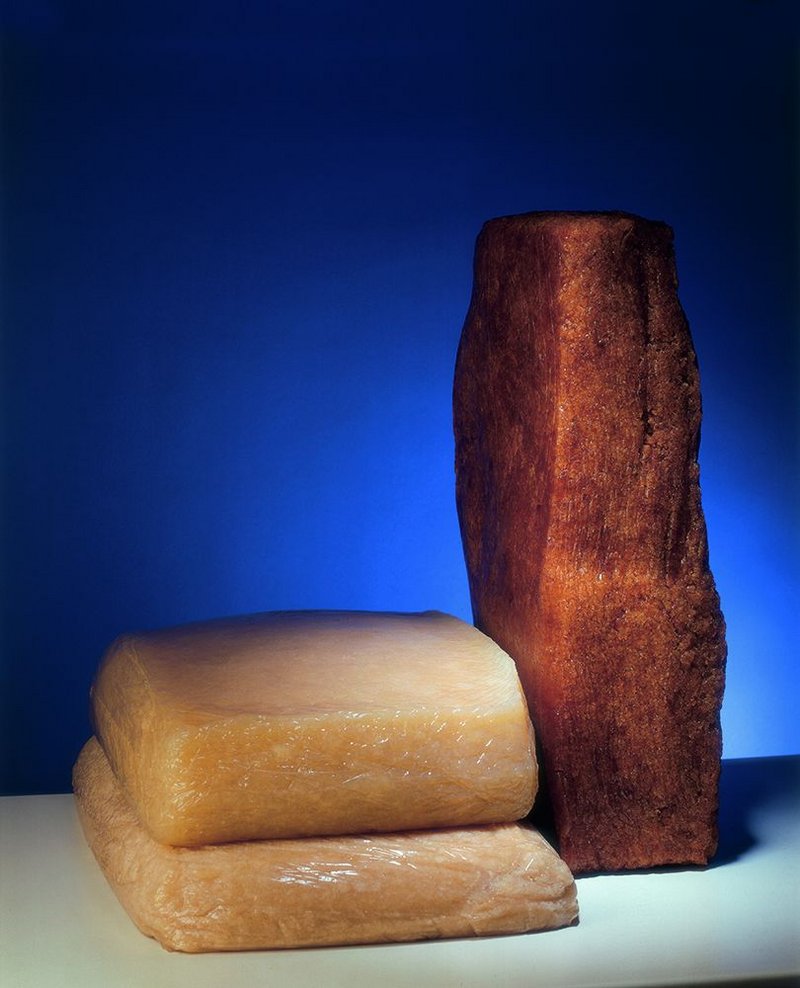 Norament rubber floor coverings are produced as 1m² tiles and include a high percentage of synthetic rubber. Synthesised from oil, Klever explains that this component is important to ensure that the product can meet the technical specifications demanded of flooring materials, including abrasion resistance, slip resistance, fire performance and electrical conductance.

> Quality control of the mix 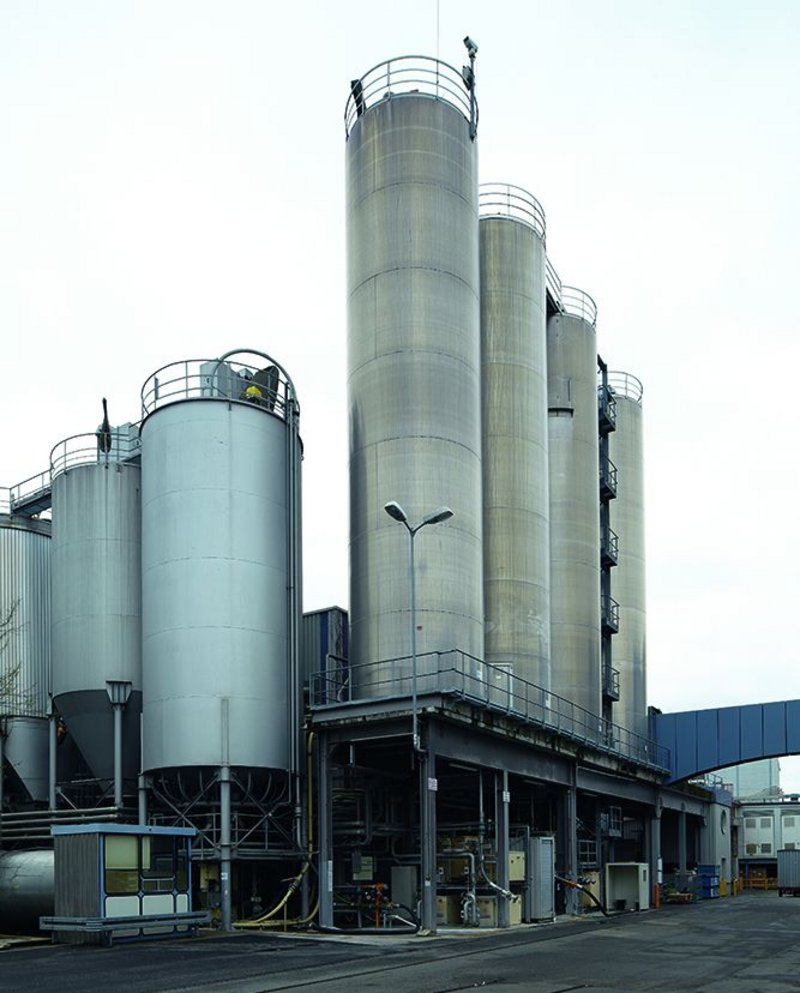 Synthetic rubber, chalk and pigments from storage silos are mixed and then dispensed in 300kg batches to the Calender line on the factory floor. Two of these huge machines heat and mix batches to reach the required homogeneity. While the technology looks quite complex, the idea is simple, says Klever: ‘It’s like blending cake ingredients – the better you mix it, the better it tastes.’ Large steel rollers heated to around 140ºC compress the mix into sheets, before running it through another set to remove air bubbles. Even at initial stages, samples are analysed to check batches meet consistency criteria. If not, the mix is corrected and the process repeated. 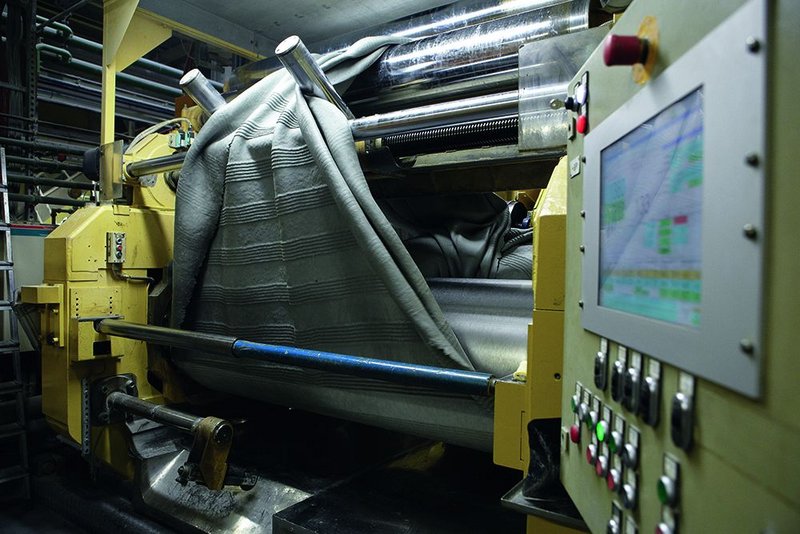 Each 300kg batch produces about 70m2 of norament tiles. Once the correct consistency is achieved, the hot mixture is run to the 1970s-built tile presses, each able to press only six tiles at a time. All six drawers are fitted with an identical tool of extremely hard and durable steel costing €15-70,000. A heated pressure of 170bar is applied to the 1m2 rubber surface for 5-7 minutes to produce a single vulcanised tile. Klever says the firm looked to optimise this part of the process, but has not yet found a better method of achieving tile quality. Once pressed, panels are trimmed. Attention must now be paid to the underside of the tile.

> Revealing the granule and finishing 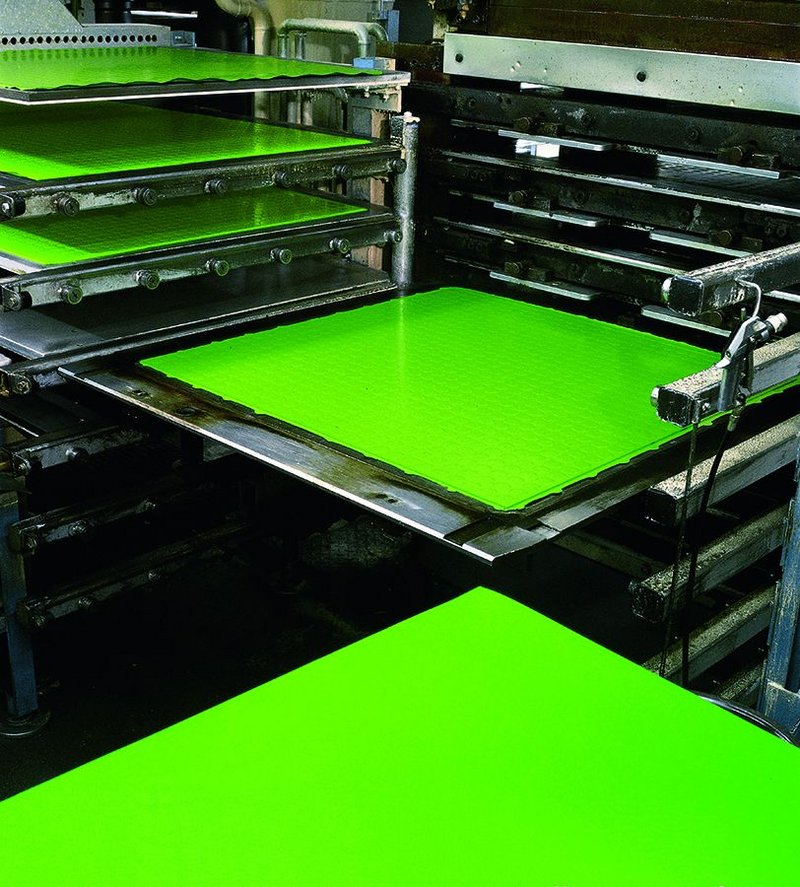 To make the granule design visible, the interior of the sheets is opened up by splitting the blanks across the plane. The appearance of exposed granulates in the blank is fixed during vulcanisation in the press. The splitting process brings the tiles to their required 3.5mm thickness. They are then sanded on the underside to give them the correct grip for bonding to the subfloor. Norament tiles are abraded in the abrasion line, which consists of five subsequent machines. During abrasion, the vulcanisation skin on the back and the mould separating agent are removed and the tiles are abraded to the pre-defined thickness. Tiles are transported through a 40m cooling plant and remain in the rest zone for at least 24 hours before being punched. 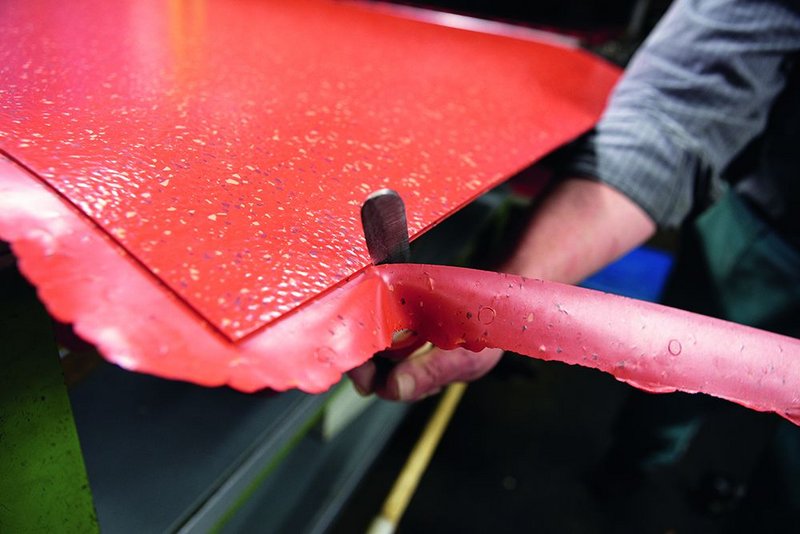 Tile thickness is measured at exactly defined distances on an automatic measuring table and documented. After abrasion of the underside, tiles are stored, tempered evenly, and punched. Sheets are photographically centered across the four corner pastilles in the semi-automatic punching machine. Tiles are stored on pallets and electronically tabbed for unique identification by the factory’s in-house product control software. Large runs of ordered stock are despatched directly, although nora does hold massive stores of its standard range on site to reduce lead-in times when ordered. Bespoke colour orders can take around six weeks.