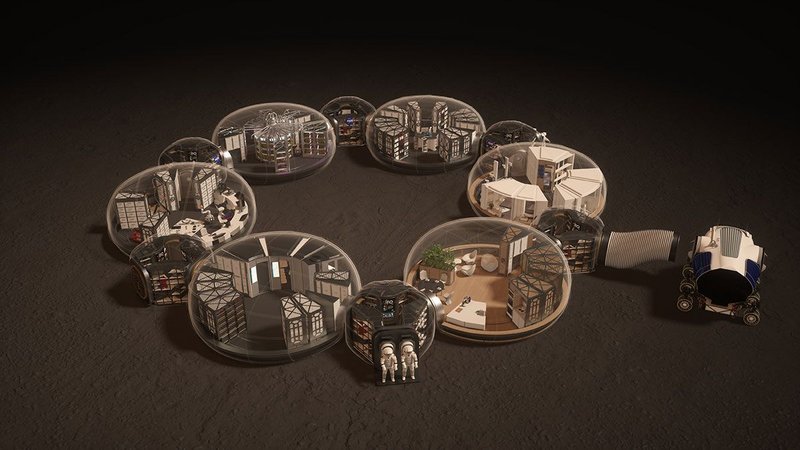 The proposed base would include six pods for astronauts to live and work in. Credit: Hassell Studio

A full scale model of a Mars habitat is the centrepiece of a major new exhibition at the Design Museum, and according to the architect, the design innovations and technologies inside could soon be applied on projects back home on Earth.

It forms a key element of the Moving to Mars exhibition, which explores how sending humans to the red planet is a new frontier for both science and design.

The habitat is inflatable and on Mars would be rapidly erected by a team of small modular robots, sent by rocket to the planet ahead of humans. Underneath it would carry a larger protective shell to fend off gamma radiation from the sun, 3D printed by the same robots using materials mined from the planet’s surface.

The six pods on Mars would include all the living and working requirements for everyday life, including a living space, kitchen, a lab, workshop and a pod for growing plants hydroponically for food. The exhibit is a hybrid designed to give visitors a flavour of the different environments.

Interior spaces are organised based on a standardised radial rack system that can be moved simply on wheels to reconfigure them for almost any purpose: for example to run science experiments, as a workshop, as part of a kitchen or a storage unit etc. The racks plug directly into a services ‘ring’ around the perimeter of each pod that provides electricity, water and data (the Design Museum version only includes power).

Xavier De Kestelier, head of design technology and innovation at Hassell, told RIBAJ: ‘The movable rack system is much more space-efficient than other systems and could have some interesting applications on Earth. For example, in London flats it could create more interesting spaces on a much smaller footprint.”

Hassell wanted to provide astronauts with a high performance environment that has a degree of comfort and familiarity. ‘When people think about space habitats, they either look to the International Space Station, which is actually a terrible mess inside, or at science fiction, which is always very clean, clinical, and white. But we don't live in spaces like that on the Earth, so why would we live like that on another planet?’ said De Kestelier.

Bamboo flooring could be grown and installed by astronauts on Mars, veneers and other tactile wall materials would cover the carbon fibre wall panels.

Visitors can sit in curvy chaise longue-style chairs designed and 3D printed by Nagami. The furniture and some tools in the pods on Mars would be printed using recycled plastics, either waste food packaging, taken with the astronauts to Mars, or from experiments, as part of a drive to minimise payloads on rockets (every kilogram of equipment brought to Mars is hugely expensive to transport) and re-purpose and re-cycle to improve sustainability.

‘We had to really think hard about the circular economy which is not just “a nice to have” on Mars, but a case of life and death. That really focused our minds on the issues involved,’ said De Kestelier. It may also translate to Hassel’s approaches to projects back on Earth, he added.

The atmosphere on Mars is 100 times less dense than on Earth and comprises mostly CO2, which is poisonous to humans. The habitat required an atmosphere similar to Earth’s and a robust exterior that would prevent it from exploding under pressure. The optimum shape needed to minimise structural stresses was identified as a sphere that was squashed down vertically to increase the amount of livable space.

The conceptual robotic construction system involves a team of modular machines on wheels that would reconfigure themselves to perform different tasks, from battery storage to scout rovers, logistics to excavation and 3D printing units.

The idea of deploying a similar system on terrestrial construction sites is not beyond the realms of possibility, said de Kestelier: “I’ve had some really interesting conversations with mechanical engineers and roboticists who find the modular system quite interesting. It could have applications, particularly on large construction sites. It’s clear that we need to reassess the use of robotics for onsite fabrication and we are unlikely to see humanoid robots in construction anytime soon. Robots will also look very different from those used in factories today,” he concludes.