Why choose a high-carbon extension when some internal reconfiguring and exuberant paintwork do the job with more fun? 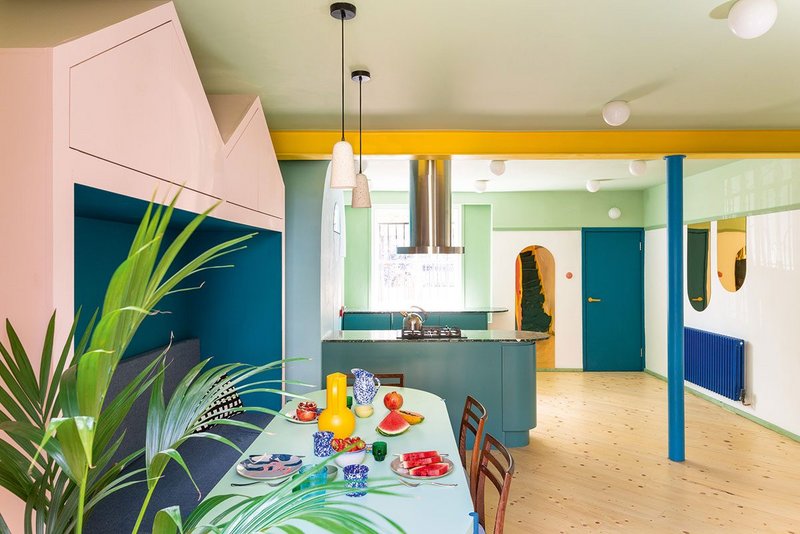 The grotto at Stowe Gardens was once embellished with thousands of shards of broken glass and multicoloured shells. Its dark vaulted chambers were lit by hanging oil lamps, so colours and surfaces flickered as guests dined and partied concealed behind the facade. This came to mind as the colours of Office S&M’s Mo-tel House danced into view when I descended into the  colourfully reimagined lower-ground space of an unassuming terrace house.

The practice’s primary physical architectural act was to persuade the client that a carbon-heavy, garden-reducing extension was not required, and that instead simply ripping out a central wall dividing a badly lit kitchen from an even more badly lit bedroom, the space could provide all the clients’ needs. This act of removal is now marked by a slender blue column supporting a Selfridges-yellow beam, together acting as gestural separation and framing.

‘It’s basically a box’, says Catrina Stewart, one half of S&M (the other being RIBA Journal 2019 Rising Star Hugh McEwen) who talks of early conversations with the client around colour ‘as a building material’ to combat the boxiness and darkness of the space; this ­yellow and blue are just two of a broad palette liberally splashed over all surfaces above the diagonal floorboards. Bold and pastel, bright and muted, tones are carefully layered towards a colour-first design which runs as deep as the grouting and light switches. ‘We are surprised how risky people think colour is’, she adds, suggesting a cheap tin of paint can radically alter any domestic room, and with careful thought given to shades and variations, colour can give a ‘three dimensionality to space’.

In other hands, such a lively approach could have become a cacophony, but through careful refinement of design, Office S&M ensures no single element dominates. The large, pink, pitched-crown seating booth could have overwhelmed, but with a small shadow gap above and airspace to either side it has the right weight for the space. Similarly, the elephantine larder alongside, its nose providing bulky kitchen equipment storage within while shedding task light below, is comfortable despite its scale.

Some of these architectonic forms and colours may have been picked up from the nearby Kingsland Road Market as Catrina walked through en route to design meetings. If not the market, the general feeling of the space is quite other to an expected domesticity, a feeling the family has described as like ‘going on holiday’ – which in Covid lockdown we can only envy.

Altogether, it acts as an adaptable kit of parts. Using cheap Dulux paints means when surfaces are stained by spillage, or the family tires of the tones, any parts can be painted, the space evolving and growing as they are. And as funds allow, the visual approach can be adopted for floors above without fear of disrupting precious thresholds between old and new – in five or ten years’ time ingredients from this ­lower-ground floor can simply be appropriated for the hall, living room, perhaps bedrooms – one splash of paint or geometric object at a time.

As I return to the cloudy street, the Hacienda-cum-Miami colours concealed behind the conservation area frontage, the holiday feels over; no evidence of the grotto can be seen. Except, perhaps, for a nighttime passer-by who might look down through the window and catch a shimmering glimpse of the colour within.