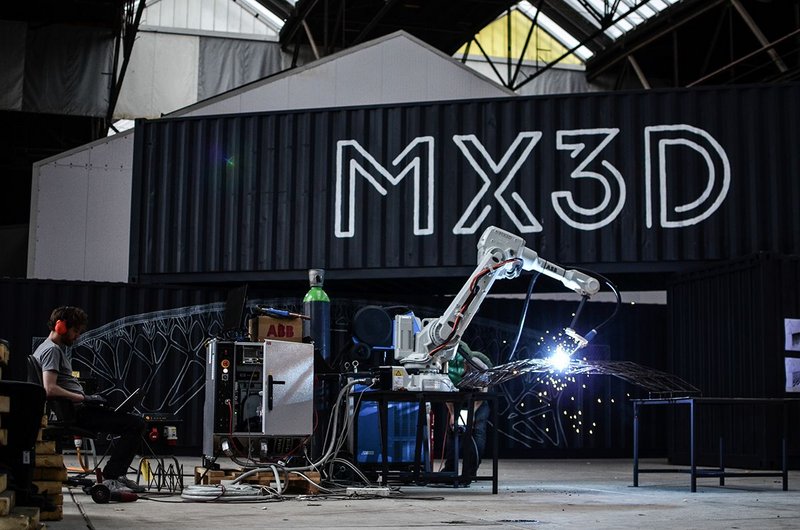 The world’s first 3D printed steel bridge, built mid-air over a canal by two automated robots, will be constructed in Amsterdam in 2017.

Designed by Dutch R&D startup MX3D in collaboration with software company Autodesk, construction firm Heijmans, ABB robotics and others, the ornate bridge is being billed as the start of a revolution as digital fabrication enters the world of large scale, functional objects made of durable materials.The exact location of the Amsterdam bridge is due to be announced shortly.

The two industrial robots will effectively ‘draw’ the Amsterdam bridge in situ, working in situ as they guide themselves from one bank of the canal to the other.

MX3D has developed an additive manufacturing method able to print metal and resins in mid-air without the need for temporary scaffold or support structures.

In 2014, the company fitted a single-arm, six-degree-of-freedom robot, manufactured by ABB, with an advanced welding machine and developed software to control it. The 3D printing technique enables the robot to work in multiple directions printing in molten steel and stainless steel – often used to construct bridges due to the high stresses involved – or other metals like aluminium, bronze or copper.

Joris Laarman, designer at MX3D, commented: ‘The underlying principle is very simple. We have connected an advanced welding machine to an industrial robot-arm. In principle, both pieces of equipment are made to perform repetitive actions. But we have now used our own intelligent software to operate these machines so they can print very complex metal shapes which can differ each time.’

If effective, the technique could have an enormous impact on construction projects, eliminating the need for controlled factory environments and moving manufacture direct to building sites. Apart from potentially speeding project delivery and reducing materials transport costs, building using robots could reduce reliance on human workers for some of the most dangerous jobs, such as those that involve working at height.

Laarman added: ‘I strongly believe in the future of digital production and local production, in “the new craft”. This bridge will show how 3D printing can finally enter the world of large-scale, functional objects and sustainable materials while allowing unprecedented freedom of form. The symbolism of the bridge is a beautiful metaphor to connect the technology of the future with the old city, in a way that brings out the best of both worlds.’

Progress of the project can be followed at a public visitor centre opening this September.