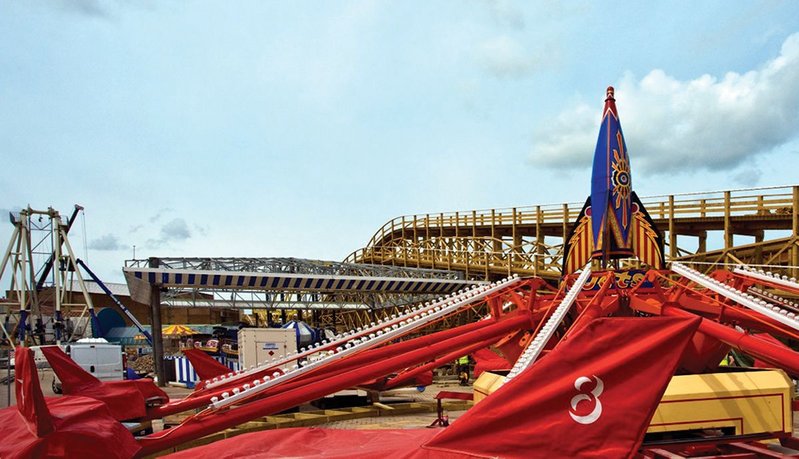 Artist Tracey Emin, a childhood resident of Margate, sums up the recent tribulations of the town best, telling PIP: ‘When Dreamland closed, Margate died; a sharp, painful death, as though overnight it became overlooked and boarded up. Neon on the Golden Mile disappeared… the hotels ceased to be hotels. The Lido, Dreamland and promenade became barren concrete wastelands. Margate had truly become the last resort… not for fading stars but fading souls.’ But, she adds, since the opening of Chipperfield’s £17.5m Turner Contemporary on the promenade’s eastern edge, it seems ‘wherever art goes, regeneration follows… Margate is coming back.’

Acting as the western bookend to the promenade, with the Turner Contemporary to the east, the new Dreamland theme park, phase one of which opened last month, is looking to add momentum to the cultural regeneration of the town centre that began when the gallery opened in 2011. The figures seem to support the ‘Turner effect’ – by 2013 total tourism revenue in Thanet had increased by 6.5% to £245m, with the total visitor numbers up 7.3% to 3.36m. The Turner’s 850,000 visitors meanwhile have exceeded all expectations. The lady in the whelks kiosk on the seafront says it’s not been this good in years.

So the reopening of Dreamland comes as a relief not only to Emin, but to the 50,000 residents of the north Kent seaside town – 20,000 of whom signed a petition to save it when the site was threatened with wholesale redevelopment. This groundswell of public support led Thanet District Council to take the unprecedented step in 2011 of issuing a compulsory purchase order on the site. Despite a legal challenge from a potential developer with a 474-home mixed-use scheme by Assael Architecture, the council wrested control on appeal in 2012 with the intention of reinventing the site as a fully functioning seaside theme park – and secured a Heritage Lottery and DCMS Sea Change assisted funding package of £18m with which to do it.

Client Dreamland, headed by CEO Eddie Kemsley, who herself has 12 years’ experience project managing visitor attraction construction, knew that bringing back the amusement park as it was would not be viable today. So it found a project team that could take its £30m budget, the kind of sum Alton Towers or Thorpe Park might spend on one attraction, and reinvent the whole 6.5ha seafront site with it. Following Guy Holloway Architects’ initial proposal, Wayne Hemingway’s design firm stayed on to develop the branding; while project design and phasing went to visitor attraction specialist Ray Hole Architects, designer of  the RIBA award-winning Snowdon Summit visitor centre.

Neither Kemsley nor Hemingway was interested in taking on the UK’s big boys in terms of scale of attraction, but they knew austerity-driven ‘staycations’ generated greater public interest in UK seaside resorts. ‘We didn’t think Dreamland could exist as it had been. We needed to embed it somehow in contemporary culture,’ says Hemingway. ‘It couldn’t be just about nostalgia, but be progressive while remaining authentic.’ Dreamland’s Kemsley agrees. ‘Dreamland might have seen up to 100m people pass through its turnstiles but now it has to be re-imagined. It needs to be based not on thrills but heritage,’ she explains. 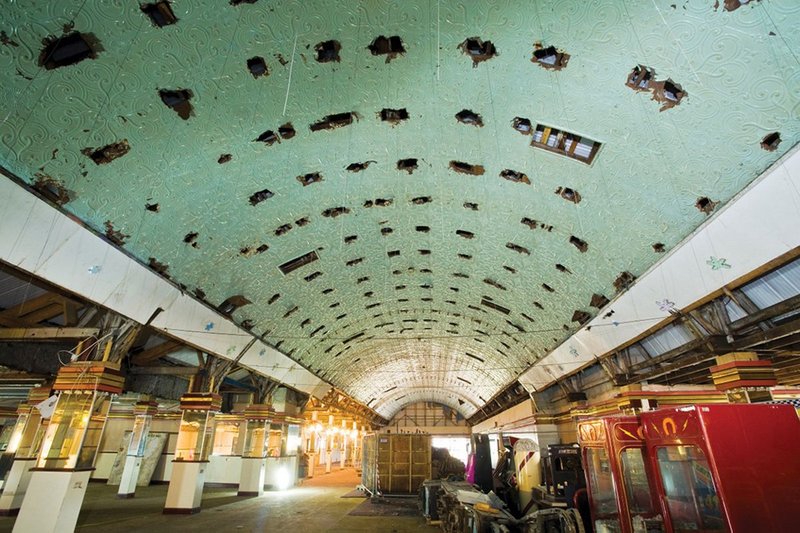 The roller disco’s metal barrel vault ceiling is being stabilised but left in its original state – all in the name of authenticity. Credit: Carlos Dominguez

So the proposal to completely rebuild the grade II*-listed 1920 ‘Scenic Railway’ rollercoaster, severely damaged in a 2008 arson attack is, in a way, a red herring in the wider consolidation strategy for the theme park. For Kemsley the rides are just the backdrop to what she terms ‘a thematic experience on the notion of what the seaside town is.’ So as well as fairground rides dating from the 1920s onwards – sold to eastern Europe and now retrieved, refurbished and installed here – Kemsley adds: ‘We’re picking the best bits of a seaside day out and bringing them together here: a sensory collision of sights, sounds and smells. It’s all about memory – from Punch and Judy and a ‘Wall of Death’ to just sitting in a deck chair round a bandstand.’

But Hemingway is also clear that more is needed to draw the annual half a million visitors paying £13/15 a head needed to make Dreamland viable. A significant part of the pleasure park will be a multi-purpose events space, aiming to draw London-based music festivals out to the north Kent coast – to be served eventually by an upgraded, electrified rail link. Overlooked by the ragstone walls and trees of the railway embankment on its southern edge, the iron bars of Lord George Sanger’s 1830s menagerie cages set into them, the new Dreamland remains true to its performance roots of seeing and being seen.

But it will be far more than that if architect Ray Hole has anything to do with it. Brought in by Kemsley to turn a disparate collection of rides and buildings into an experience, his discussions about the attraction typology are initially more neurological than architectural. ‘We try to get people in the amygdila part of the brain – to find themselves being drawn in by sights and smells and not quite knowing why,’ he says. ‘We try to create a psychological platform starting at the door, beginning with anticipation and arrival, moving through the core experiences to departure with memory.’ Hole, who’s also a non-executive director of the development, concedes that talk like this has lost him some clients. ‘Some people just don’t think we’re architects, but this is more about a psychological, strategic brief than a physical accommodation one.’

Hole feels architects can be too ‘passive immersive’, dealing merely with the structure of an attraction rather than its total experience. He sees the building as just the start of the project – a reason why ‘all the Millennium projects became drains on the public purse’. For Hole ‘there are only three ways of maintaining revenue – bums on seats, retail and food and beverages. You use the amygdila to tie them together with the building.’ Rides, however thrilling initially, are subject to the law of diminishing returns, which is why companies like Merlin and Disney spend fortunes periodically changing them.

It’s almost sinister, but Hole accounts for almost every sensory minute of the three hours that phase one visitors will experience

For Hole, Dreamland will ideally be more like the very different ‘Flanders Trench Experience’ than a theme park, more about a feeling of authenticity than thrill factors, of emotions less susceptible to boredom. He proposes a sensory journey that draws visitors through the site – from the enticing ‘entranceology’ to smell cues of candy floss and toffee apples from strategically placed stalls, loudspeakers pumping out nostalgic seaside sounds and sightlines that engage at 1.5m and 0.8m high, plus attention to the continued engagement of those watching the rides rather than sitting on them – it’s all made to be a haptic experience for both young and old.  It’s almost sinister, but Hole accounts for almost every sensory minute of the three hours that phase one visitors will experience. As more of the site completes, that ‘dwell time’ will only increase.

This all highlights the issue of phasing –complex for a site that contains listed structures including the Scenic Railway and roller disco. The former ballroom event space is yet to come and, earmarked for third party investment, the 2200-seat cinema and seafront buildings have secured an extra £2m of public funding. While many might carp at the four-phase opening over the next two years, the design team doesn’t. On the contrary, it will give it time to decide what’s working and what isn’t, and to target residual monies better. Hole compares it to Hermann Hertzberger’s strategy of leaving routes unpaved until he had seen users’ desire lines. ‘Optimise the offer at the point of opening, but don’t build everything in year one as all attractions see visitor numbers drop in the second year,’ he says. ‘You try and keep the trajectory going up by adding and upgrading to keep the levels of visitor anticipation high.’ 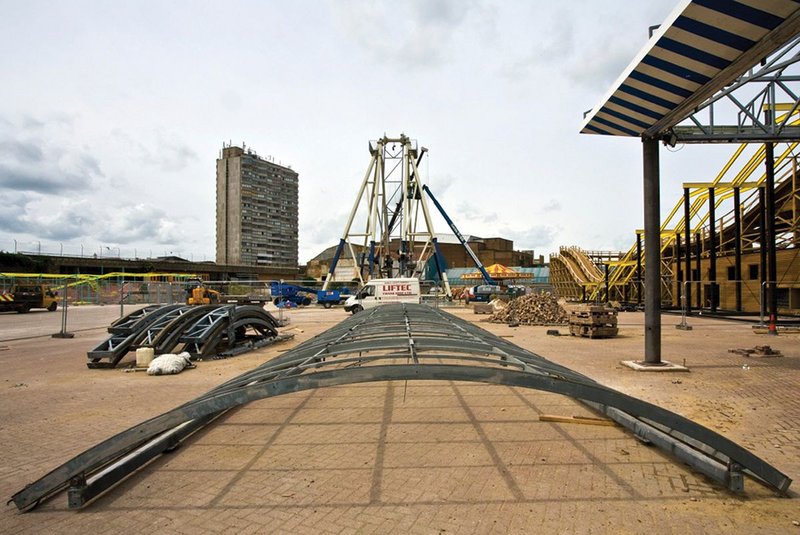 Beyond the site of the big wheel, Margate’s brutalist housing tower looks down over Dreamland. Credit: Carlos Dominguez

That’s easier said than done for a project that will live or die on its £30m investment. Hole insists they can’t and won’t exceed the figure, while Hemingway called the project a ‘rollercoaster ride’ for the way it was complicated by stop/start legal challenges. So far it’s been about ‘make do and mend’, most evidently in the roller disco where the holes in the original tin-faced barrel vault ceiling have been left, with strings of light bulbs being fixed straight to the unremediated surface – another nod to that authenticity. For Hemingway, the project’s excitement is its sheer contingency. He says: ‘If there’s a problem you can’t just throw money at it, you have to rethink the approach.’ This might also account for the novel souvenirs designed by local firm ‘Junk Deluxe’, fashioned from the burned-out rollercoaster’s repurposed timbers.

But it all fits Dreamland’s aspiration to rise Phoenix-like from its own ashes. Eddie Kemsley admits it would have been much easier for Thanet District Council to simply hand the site to a private developer. Instead it’s financed the scheme, creating 350 local jobs and hopefully consolidating the town’s renaissance. ‘It’s an emotional story about a community that fought hard to save something they believed in and we have an enormous responsibility to deliver for them,’ Kemsley remarks earnestly. With nearly £20m of public money already  sunk into Dreamland, you can only hope they do.