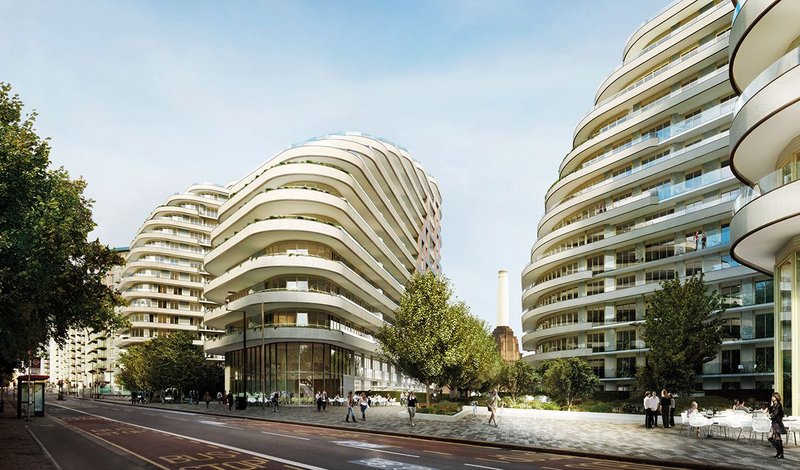 Gone are the days of one of the capital’s most contentious post-modern buildings, Marco Polo House, whose monochromatic, oversized pediments stared out from its sea of a post-industrial landscape like a po-mo Paestum. The site is now is part of the multi-billion pound Nine Elms regeneration, at the centre of which will be the iconic and cubic American Embassy; a masterplan of such scale that it merited its own Northern Line extension. And replacing Marco Polo House, architect Scott Brownrigg’s mid-rise Vista residential development is rising on the south side of Chelsea Bridge, taking full advantage of views west to Battersea Park.

The project, by client/contractor Berkeley Homes, is made up of 456 one, two and three-bed flats, duplexes and penthouses, rising from six to 16 storeys in height, stepping back as they rise to form terraces that minimise the bulk of the scheme and generate its distinct, curved form. Of course, with all that formal complexity, there’s a similar increase in the complexity of the services strategy to feed it – something Scott Brownrigg thought would be best dealt with at the outset rather than accommodated further down the line. This drove it to consider a fully integrated strategy for the vertical pipe runs – one helped with the use of Hilti’s latest CFS-CID cast-in firestop device, which allows the sleeve and collar to be cast into the concrete slab of the building as they’re poured, obviating the need for any further works. And perhaps firmly putting the holes in the former ‘Polo.’

It will come as no surprise that engineering manager at Hilti Olga Katsanova sees Scott Brownrigg’s specification of the cast-in device as something of a no-brainer. It was, after all, first developed 10 years ago as a one-stop solution to help eliminate firestopping complexity and margins of error, and was tested for a wide variety of plastic pipe materials. ‘The whole plastic sleeve detail with its integrated fire collar is cast into the slab as it’s being poured so you can pass your pipe through it without any further sub-contractor remedial works,’ explains Katsanova. ‘It’s easy to install, fit for purpose, meets EN-1366-3, and since it means you have effectively eliminated two thirds of the labour associated with doing the job, it pays for itself very quickly.’ Katsanova does concede that it makes demands on the user – you must have decided the exact position of the opening when you cast the slab – but she adds that this aspect is merely in line with design and construction best practice.

Although the Vista project is the first time he’s used the cast-in device, Scott Brownrigg architect Stuart Mills agrees – having been asked to use them by Berkeley Homes, which had successfully employed them in a previous project. And in line with best practice, the architect tried to ensure that slab penetrations were fully fixed at tender stages on this construction management project. ‘With nearly 500 apartments, we were keen to ensure these were prescribed at tender, meaning we’d only need to alter them on rare occasions that buyers bought adjacent flats, requiring major internal reconfiguration,’ explains Mills.

He says that being new to the product, the firm conducted its own due diligence on the cast-in device early on to ensure that it was suited to the scheme, and adds that it was happy with Hilti’s ‘invaluable’ support throughout the construction phase. Mills quickly grasped the cast-in detail’s potential benefits. ‘I liked its simplicity- there’s not much that can go wrong with it as opposed to the workmanship issues you’ll be faced with when creating service openings using traditional methods,’ he adds. But that doesn’t mean it allows for lack of co-ordination. ‘Positioning is critical as the detail is obviously not a flexible one, but here at Vista there are some tight bathroom voids and it’s helpful that the collar comes in different sizes as well as ratings.’ 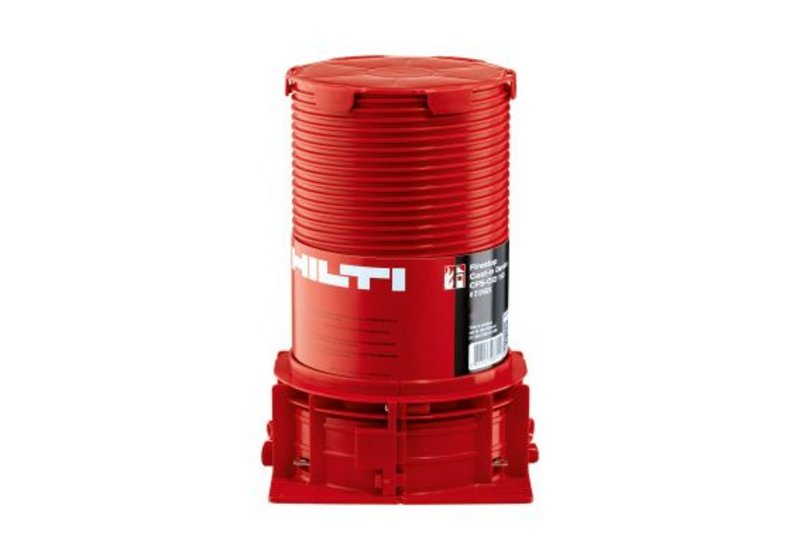 The latest cast-in detail’s design modifications have increased its capacity to be tailored to different on-site scenarios here too – something MPB Structures’ senior project manager Michael Begley welcomed. Having used the product for years, he appreciates the next generation version that’s being employed at Vista, saying it’s helped put the project nine weeks ahead of programme. ‘The new device is squarer, more stable and made of denser plastic. That really helped when it came to fixing together the 150mm extension pieces in areas like the podium, where the slab can be 800mm thick in places,’ he notes, adding that it’s a case of just ‘marking up, screwing in and job done – the screw on protector caps are also much better.’ And the way the latest models can snap together with only a 52mm gap between adjacent 110mm pipes – as opposed to the former 105mm – allows the detail to be more space efficient. This also makes it easier for devices to fit in around rebar runs, its compactness requiring less bending of steel around their positioning.

Begley says it also brings more cost surety to a contractor when tendering, avoiding potential logistical and programmatic costs associated with building open service holes on a working site. It’s an opinion echoed on the design side of the team, with Scott Brownrigg’s Mills saying, depending on the level of desired flexibility of the project, that he ‘wouldn’t have any reservations specifying the cast-in detail on future projects’. If Begley’s to be believed, maybe he needn’t be such a crystal gazer. ‘There’s 3,500 slab penetrations on this development, he concludes. ‘If we get them all right, imagine the savings you’ll have made.’