Rogers Stirk Harbour & Partners’ new home is a long way from its old riverside haunt, in more ways than one, but the spirit remains the same 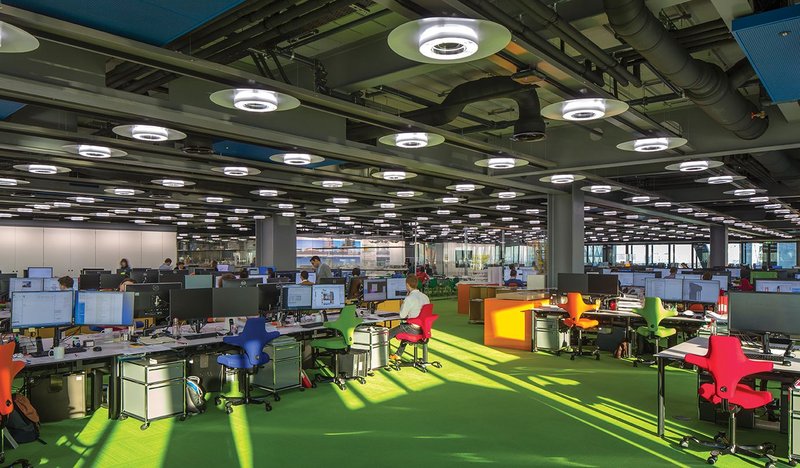 Axial view from the corner breakout space back into the depth of the office. Credit: Paul Rafferty

For a firm like RSHP, whose ethos over 30 years seemed in part defined by the genius loci of its west London riverside location, you have to wonder how traumatic the move from the banks of the Thames to Bank station could have been. Lord Rogers of Riverside’s status as a peer is, after all, predicated on the office’s former location and his wife Ruth made her name and a gastronomic brand from it. What’s the chance of your creative potency drying up once you move away from the river?

It’s all up in the air now, literally, since RSHP moved to the 14th floor of its own Leaden­hall Building, unable to secure a lease extension on the old place and lured by a preferential one from British Land, sensitive to changes afoot in the City where hedge fund managers seem to be moving to the West End and creative start-ups are crossing over from Shoreditch to the Square Mile. You might see them all come and go looking west over the dome of St Paul’s, and there’s still a view of the river, albeit a distant one; while Rogers’ own masterly response to another genius loci, his Lloyd’s Building, lies opposite.

It was a given that RSHP was going to leave its own imprimatur on The Cheesegrater, a building that was originally designed, with its shell and core, for more conservative financial services tenants. The brief for the 1,620m2 floor plate, fitted out over 16 weeks for the firm’s 200 staff at a cost of £2.3 million, was that it retain the best of the former HQ, dispense with its flaws, progress the flexible aesthetic and future-proof it.

The three-building, multi-level domesticity of Thames Wharf is swapped for a tabula rasa of single storey working; the office now split in a tripartite way by its corner breakout spaces. Desks to the east, west and south radiate out from the central meeting space, accessed via the reception off the north core: three fluid and connected colleges of industry around the office’s new beating heart.

The signature fluorescent carpet reappears (in green rather than blue), but the suspended ceilings don’t; after all, why have 2.75m ceiling heights when you can have 3.7m? It’s  interesting to look up, however, and see the air handling units, ducts and pipework, in the past celebrated with primary colours, then encased in high tech stainless steel, now shrouded in a thick layer of black nitrile rubber. Hugging the precast concrete floor slabs, neatly cosseted in its thermal and acoustic absorbent layer, the firm insists this is still a functional expression of the services – just their most nuanced version.

Still at ceiling level, the firm worked with Spectral Lighting on bespoke circular LED light fittings running in regimented lines, directly mounted on the cable trays. But there’s room for insubordination; track-mounted task lighting can be inserted anywhere along the runs, actuated by your mobile phone – one of the things supposedly offering what RSHP calls ‘a surprising level of humanity within a great super-studio space’.

As above, so below. The flexibility evident in the ceiling void is reflected at task level where, once your eyes make it past the chromatic office seating, you see the results of the firm’s collaboration with Dutch furniture maker Ahrend which created desks up to 12m long, with spine, supported on only four legs. The white Trespa surfaces have central flaps that open for workspace technology and phones; when the CITRIX system is up and running, they should be able to pivot closed permanently. The brief was that in ‘meeting’ mode a sheet of paper should glide effortlessly over them; an uninterrupted surface – perhaps expediting the passage of the form of appointment from the architect to the hand of the client. But as the practice’s sleek new HQ exemplifies, from the detail, to the building, to the context; in the competitive world of the mega­project designer, every little helps.