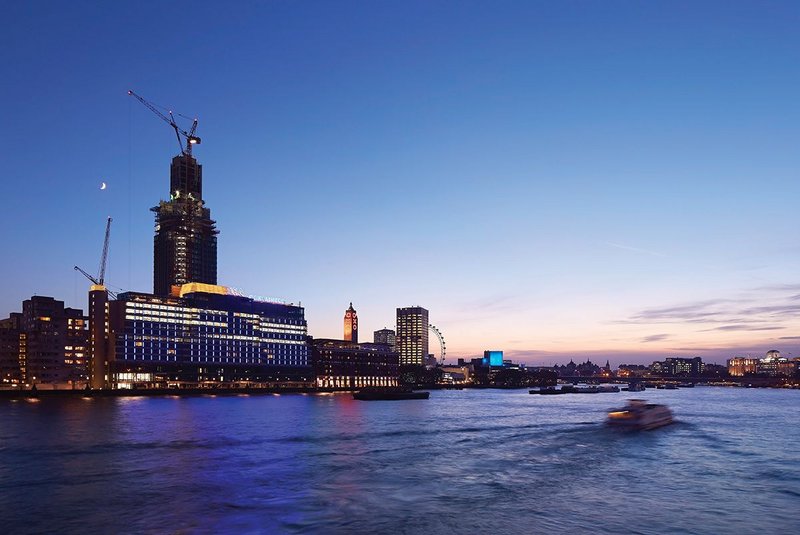 If you’ve ever felt the urge to act out that famous DiCaprio/Winslet scene on the bow of the Titanic, don’t bother booking a transatlantic cruise, just head to the rooftop terrace at the newly refurbished Sea Containers House in London, lean out over the balcony and feel the wind rush through your hair.

Not only does the building resemble a great cruise liner berthed on the banks of the Thames, complete with a funnel-shaped roofline and the words SEA CONTAINERS boldly lit up across the side, the hotel interiors, designed by Tom Dixon, also reference transatlantic maritime history and aim to convey a sense of the classy art-deco sophistication of the 1920 and 30s.

The project’s bling factor is underpinned both by an external lighting scheme developed by architect master planner TP Bennett, and by the internal scheme for the hotel, by Dixon’s Design Research Studio. Both aspects were overseen by lighting designer Isometrix.

Lighting played a major role in rebranding the building as a hotel, engaging it with the public realm and reorienting the north facade’s geometry, explains Mark Stewart, director at TP Bennett. ‘On the facade, we wanted to play down the main bulk of the building but emphasise certain parts of it. It was really a question of getting the balance right. We wanted to emphasise the new public functions and the Sea Containers brand to attract people to come in, but not to dominate the surroundings or draw attention away from more historically and culturally significant landmarks along the river – such as the South Bank Centre and Tate Modern.’

Sea Containers House was built in 1978 as a hotel, based on a design by acclaimed US architect Warren Platner, designer of the Windows on the World restaurant at the top of the Twin Towers. Economic troubles meant it was swiftly converted into an office block for the global shipping company Sea Containers.

It remained in that use until 2011, when new owner Archlane revealed plans for a major multi-use refurbishment and redevelopment. The new scheme has mostly offices on the main river elevation, a new 28,000m2 office block on the site of the existing service yard, and a 360-bedroom Mondrian Hotel, housed in an existing block spanning north-south above a road to the rear. The hotel also operates two restaurants and a bar on the lower three floors facing the river, plus a 61-seater screening room, subterranean spa and rooftop bar. 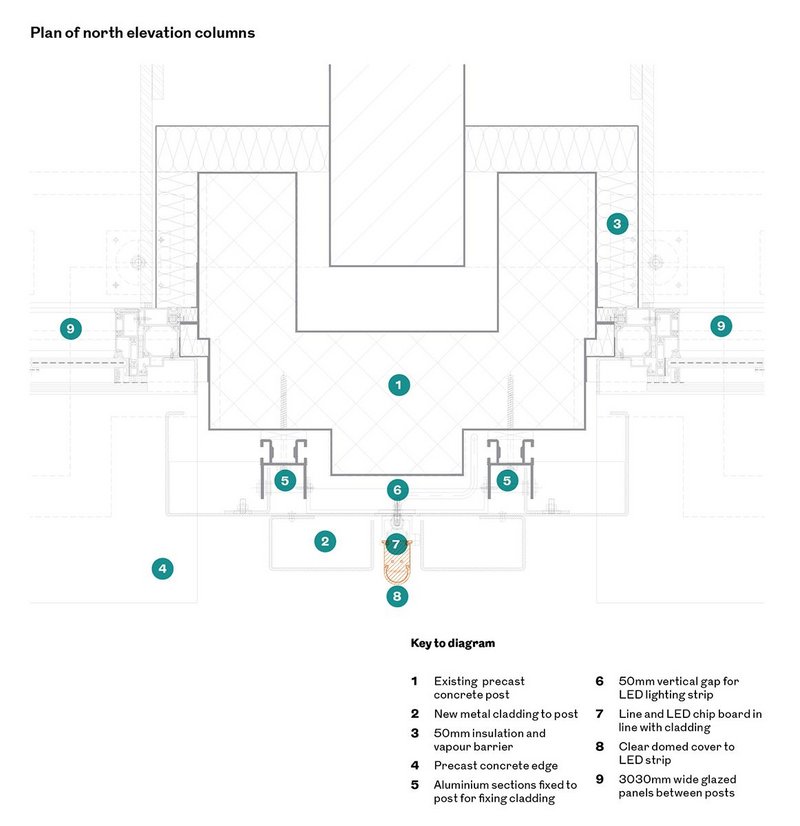 The original concrete facade had a monotonous, grid-like appearance, which was reinvigorated and redefined by a new staggered roofline and aluminium cladding system on the ground and first two floors.

Where before the river frontage was surrounded by railings and had no active use, full height glazing now provides enticing views into a bar and restaurant which in the evening emit a warm white glow across the river.

Hundreds of narrow grey aluminium cladding panels have been installed between the windows across the rest of the facade, in an effort to emphasis the building’s horizontality during the day. The panels are fixed to existing precast columns and read as part of the newly-glazed window system.

Thin strips of high efficiency blue LEDs concealed in each cladding panel (see diagram), softly illuminate the entire facade in the evening, simultaneously switching its orientation from horizontal to vertical.

‘The blue LEDs are designed to define the building’s structure and frame, but not the overall bulk and mass. Each is the height of a window and breaks at the sill,’ says Stewart. ‘The colour, a cool blue, is based on the findings of a study we carried out examining the various lighting schemes along the river. The same colour was used on the Millennium Bridge and elements of the Oxo Tower. It was also used for the LEDs around the edges of the “Sea Containers” lettering at roof terrace level.’

Limitations on the maximum length of cable used to power the facade LEDs meant it had to run across the centre of the building, concealed below the window sills mid-way up, then feeding up and down to connect into the aluminium window cladding. Lights are linked to control mechanisms on some of the terraces and back to the building management system. The low power LEDs form part of the scheme’s environmental strategy, while the new build and refurbished offices have achieved BREEAM Excellent and the hotel BREEAM Very Good.

The lower three floors of the north facade were replaced with an aluminium cladding system, while two new office floors were added on the roof.

The ‘Sea Containers’ lettering evokes the rooftop graphics of early New York hotels and is highlighted against horizontal yellow bands of lighting covering a plant screen on the roof. This screen is a ribbed metal support structure with a perforated grey powder-coated screen and applied copper coloured strips concealing LED uplighters. An original ribbed and gilded fibreglass ball on the Eastern-most stair core was removed and replaced with a matching linear ribbed treatment to the plant screen.

The warm yellow glow on the screens was created by installing white LEDs inside rows of copper-coloured tubing, open on the top so light can reflect off the underside of the tube above. The plant screen has smart art deco curves, evoking the sweeping form of a cruise ship funnel, and is designed to complement other copper elements in the building – most notably a huge copper ‘hull’ structure, designed by Tom Dixon, which penetrates the rear facade on the upper ground floor to form the hotel reception area.

‘Most of the cues for the external branding came from the lighting inside, and were designed relatively late on, after the concept for the hotel was developed. We ran workshops with Design Research Studio and the hotel architect, EPR, to develop a holistic approach to make sure it would work,’ says Stewart.

Dixon’s design for the Mondrian is his most high profile project to date. It takes inspiration from the disco glam of the 1970s, brutalist architecture, the riverside location and the romantic idea of a transatlantic hotel combining the best of Britain and America.

Nautical influences are rife. Platner himself designed for Stena Sealink, and the most literal is a collection of model ships salvaged from the building before work began.

Many original light fittings have been reconditioned and reused, including ceiling pendants and over 30 original 1950s wall lights, including double lights and triple pendants. These fittings were taken off site, refurbished and rewired to incorporate retrofit LEDs compatible with exacting energy requirements.

‘We added new bespoke lighting pieces that reference the original building architecture,’ says Gareth Payne, senior designer at DRS. ‘For example, deep art deco-style recesses in the structure above the building’s original main entrance canopy are referenced in new lit recesses, with a similar geometry, in the Dandelyan bar. Our overarching strategy was to create warm and intimate spaces, mostly using warm white lighting, but at the same time a series of different destinations with each space taking on its own personality.’

The Dandelyan bar is very dimly lit and intimate, with a residential quality of lighting, similar to a comfortable lounge. In contrast the entrance lobby is bright, giving a sense of a grand arrival and helping define the thrusting form of the copper hull and a chain-link sculpture. The hull itself is riveted together to create a patchwork pattern across the surface and edged with cove lighting above and below.

Other custom Tom Dixon fittings here include large void brass pendants and a gobo that creates  a shimmering water effect across the floor.

Perhaps the hotel’s most exclusive space is the art deco-inspired reservation-only rooftop lounge, described by Dixon himself as ‘a bit titanic’, and that cinematic outdoor terrace. As for my DiCaprio moment? It hasn’t happened just yet, but a couple more cocktails should do the trick … ‘I’m king of the world!’