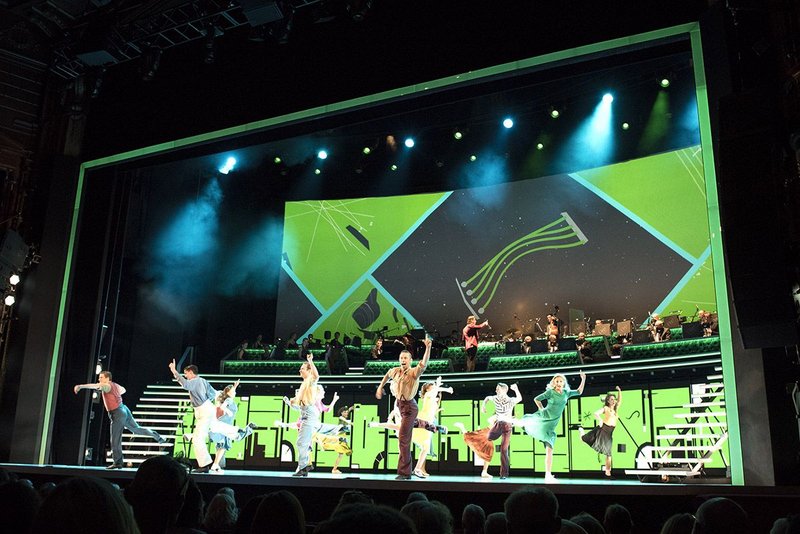 Sixty five years since Frank Sinatra sang on stage at the London Palladium, he’s doing it again – an impressive feat, particularly considering it’s also 17 years after his death. The resuscitation of Ol’ Blue Eyes for the show ‘Sinatra: The Man and his Music’ has been achieved through complex virtual enhancement from old films of the man himself and Sinatra’s digitally modified isolated voice – allowing a full 24-piece live jazz orchestra to play along with him – sitting atop a mutating stage that acts both as a site for performance and for projection. The result is a strange, virtual experience of Sinatra’s life played out before the viewers’ eyes – a ‘finely engineered’ (says London’s Evening Standard) son et lumière that uses state of the art technology and some impressive smoke-and-mirrors set design.

Designer of the set was Stufish Entertainment Architects, formerly Fisher Productions. Mark Fisher was executive producer for the 2012 Olympics opening and closing ceremonies, and his firm was behind recent tour sets for U2 and the Rolling Stones and Beijing’s Olympics ceremonies. The Sinatra show’s producer, Karl Sydow, obviously thought this level of experience was needed for his company to raise Sinatra, Lazarus-like, at the Palladium. The firm’s input has resulted not only in a physical set that acts as a bandstand with constantly changing LED screens below it, but also one in which the screens themselves rotate and open to allow it to be used as the dancers’ main exit and entrance. Add to this a huge ‘cyclorama’ back screen, mid- and front-of-stage drop-down gauzes and two ‘Hero Screens’ (HS1 and HS2) that allow singing Sinatra to ‘move’, larger than life, around the front of the stage, and you have a heady combination of surfaces and multi-media possibilities that, at times, make the experience of the singer almost 3-D.

Stufish chief executive Ray Winkler says the whole production was a close collaborative effort with digital production designer 59 Productions and sound engineer Dan Samson. ‘It was all about how the set came together to tell the story, how the story worked with the music and how that music worked with the choreography,’ he says. ‘They all needed to be singing off the same hymn sheet – and all in a tight amount of space.’ The whole musical production is designed to run off a timecode, which means that the projectors know where the gauze drops are or where the screens are. Some images of Sinatra are huge, projected directly down at very acute angles from the stage gantries above using corrective lenses that eliminate distortion. ‘We took a bit of dark arts from Harry Potter and just ran with it,’ says John Lyle, the video programmer freelancing for 59 Productions.

Part of the challenge for Stufish was to turn the Palladium’s difficult sight lines to advantage. Project architect Jenny Melville says it wanted to provide different spatial experiences for different positions in the auditorium. For Melville, that meant projecting on the floor as well as the gauzes to make the experience more immersive for those up in the gods too. The production’s nine stage projectors meanwhile create a complex layering of images from the Sinatra story throughout the performance to help evoke the man in all his Technicolor wonder.

The design was not just about this performance either – the show is going to be hitting the road so Melville had to design the cantilevering steel set structure as both demountable and modularised. The Palladium is the largest venue the show will be performed in, so it’s designed so that segments can be removed, allowing the set to shrink as needed without a redesign.

As for the show, it seems like a bit of a curate’s egg, being a quite literal song and dance about a man who isn’t actually there, but it does strike a chord on the issue of our celebrity and our modern-day relationship to ‘live’ experience in a digital world. There seemed a strange void carved out in the wake of Sinatra as he drifted, ghost-like, around the stage; but while watching I was reminded that all stadium rock shows or festivals rely increasingly on screens that mediate our live experience. Blowing up the event larger than life for the spectator to mitigate the small scale of the distant performer – this interaction might be Stufish’s bread and butter business but the art of resurrecting the dead is entering new territory for them. One could argue that there’s an absence at the core of this experience, but when Sinatra stares out at you from the stage and belts out ‘My Way’ you find yourself quite prepared to follow it. Odder still, when the dancers are throwing their high kicks across the stage during the instrumental break and HS1 And HS2 have disappeared up past the proscenium; dammit, you actually miss the guy.