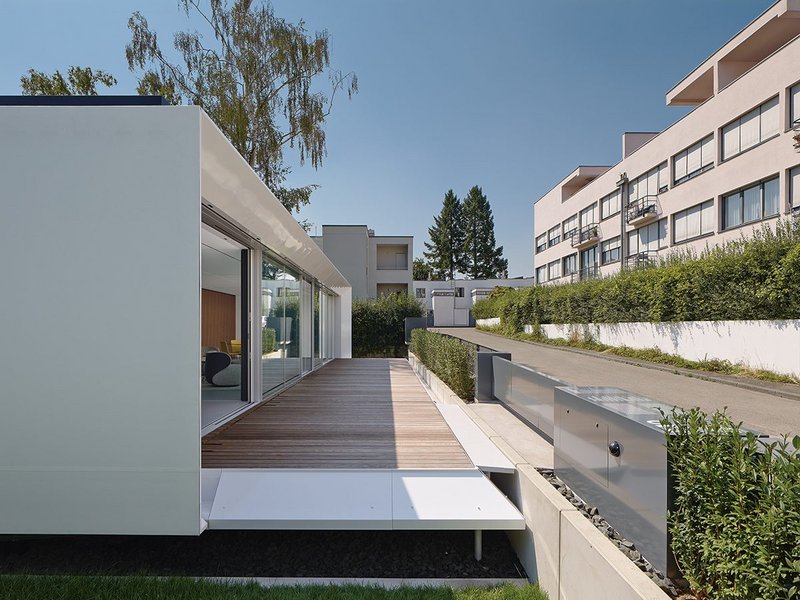 ‘Triple Zero’ B10 Aktivhaus prototype for Stuttgart Institute of Sustainability, by Werner Sobek. Zero energy, zero emissions and zero waste. Credit: Zooey Braun Photography
In 2019, the RIBA launched the 2030 Climate Challenge, an exigent series of climate-conscious targets for achieving net zero.
Since the initiative’s launch, the Covid-19 pandemic has demonstrated the devastating effect of an unsustainable relationship between humans and the environment and reiterated the urgent need for action.
Lockdowns and quarantines upended our home lives too, our houses forced to cater to functions they were not configured for. But where some see restrictions others see opportunities. In this year’s SterlingOSB Zero competition, RIBAJ challenged entrants to design a family home of no more than 200m2 GIA that adheres to the RIBA’s 2030 Climate Challenge principles. SterlingOSB Zero – a precision-engineered, structural grade OSB made with zero formaldehyde – must form the mainstay of the materials palette, and designs must consider its capabilities, limitations and intrinsic properties.
The home could accommodate either single or extended families in urban or rural contexts, but should – in the most creative way possible – attempt to meet the demands of the 2030 Climate Challenge, such as minimal operational energy use and water consumption, non-reliance on fossil fuels, limited waste, offset residual carbon emissions etc – an ambitious brief but one that prepares for a new version of reality set for the near future.
A morning’s judging narrowed the entries down to eight, with the winner, Kevin Sulca’s Ventanilla House – a modular solution to the unique challenges of living in Lima, Peru – only narrowly beating Rob Hilton of Hilton Barnfield Architects’ Naturehaus  to the top spot. Sulca’s design was praised for its compactness, scalability, and polemical stance against the poor living conditions of Ventanilla’s inhabitants, given the district’s humidity, precarious housing and lack of green space. David Connacher, marketing manager of Norbord Europe, praised the way that ‘it fit the brief in terms of different generations comfortably living in the same house’, while RIBA Journal deputy editor Jan-Carlos Kucharek described it as a ‘simple but tangible, robust proposal’. In particular, its provision of housing to people across the social spectrum was commendable. ‘Different levels of society could live in these houses,’ applauded Kristofer Adelaide, architectural director of KA-A.
Close runner-up Naturehaus was universally described as ‘beautiful’ by the agonised judges. ‘Naturehaus has a large footprint and we are trying to push compactness,’ conceded Kucharek eventually, referring to the size of the plan. ‘But this doesn’t take away from the fact that it is a very strong concept and as a proposition it is really considered.’ Recognising its inclusion of a huge range of sustainability measures, both in construction and operation, Adelaide aptly described Rob Hilton’s proposal as ‘a breath of fresh air’.
The second commended entry, Jason Scoot’s Lattice x Live x Work, was unusual among the entries as a retrofit, using a reconfigurable OSB grid to turn a derelict garage unit into off-grid urban flats. ‘I was mesmerised by all the geometries,’ said Stephen Proctor of Proctor & Matthews Architects. ‘It is so complex, I feel I could get lost in it or retreat into it.’ The design’s commitment to avoiding demolition was praised, while Kucharek hailed its intricate mesh-like internal form as ‘visionary’.
DarX’s (Alper and Yegana Dilek) striking Self Sufficient Zero also made the commended list. The technology-driven ‘build your own’ concept consists of stackable net zero carbon modular living units. It was praised for its integration of technology, including a drone network (as Bethan Watson of Caroe Architecture put it: this one certainly ‘had something a bit extra’ to offer), for the consideration given to the spaces in between buildings, for contributing to an amenable wider neighbourhood and for its stunning visuals.
Making the longlist were Peter Dagger’s Mitre House, comprising OSB units framing a central courtyard; Davide Roth’s Raincatcher, a part-3D-printed house of uniquely curved form; the Matchbox Townhouse by Hon Yen Chong and Chen-Yong Tan , a terrace of OSB pods sharing an energy core; and Off Grid 2030 by Angus Eitel, Isabella Hicks, Josh Smith and Olivia Laughlin, a home that exploits fully the benefits of standardisation, using tessellating OSB modules.
The competition’s intent was to explore the future shape of the family home in our changing climate, reimagining spaces for new patterns of living, while placing crucial emphasis on sustainability targets. Each of the winning entries demonstrated this with aplomb. •

Meeting a poignant brief
As we approach the end of another year of the ever-popular Norbord SterlingOSB Zero/RIBAJ competition, I’m delighted to say that the entries for 2021 have generated the most interesting discussions, due to the hot environmental topic, and so the most challenges in terms of shortlisting too!
As always, we thank all the participants for showing such support in these busy, complex times for all businesses – and people.
With the impending challenge to meet carbon targets and the ever-growing realisation that we need to change how we live our daily lives, this year’s brief was never more poignant. How do we create a sustainable future for ourselves?
We received many brilliant entries and, as ever, the quality of each was of a very high standard. Happily for me and the other judges, the decision-making process was probably the most relaxed and fun of all of the years.
I’d like to thank all of the judges for giving up their spare time and for their vast knowledge of the thinking that goes into building a structure. A special thanks goes to Stephen Proctor who has been with us since the competition’s inception.
Mostly I’d like to thank the individuals and practices that entered for taking time out of busy schedules, especially in this year when I know the demands on your work were higher. It’s great that they all found the energy to enter a competition that we all have come to enjoy judging and hosting.
Thanks to everyone who entered and we hope to really ‘see’ you next year! Stay safe.
David Connacher, marketing manager, Norbord Europe